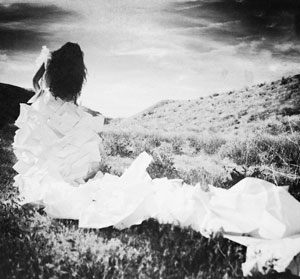 Overflowing with spontaneity, energy and stream-of-consciousness-style lyrics, the latest release by supergroup Papercranes is a combination of soulful sweetness and sophisticated angst. The band is fronted by Rain Phoenix, sister of the late River Phoenix, and is comprised of a hodgepodge of other familiar faces. The lineup occasionally includes Rain’s sisters Summer and Liberty, actor Durmot Mulroney, labelmate Jenny O, The Minus 5’s Scott McCaughy and Flea of Red Hot Chili Peppers.

Phoenix’s vocals are the backbone of the album, fluctuating between sweet and airy murmurs—à la Anya Marina or Regina Spektor—and throaty, achingly tormented moans. The album features a whole host of contemporary and classic female influences. From sugary Feist-like whispers on opening track “Shell” to the guttural wails of “Sea Red” that channel Grace Slick. In addition, the piano, trumpet and drums combine in an ethereal mix of jazz and folk that reflects darker moods than Papercranes’ previous records.

Eccentric in both concept and execution—the band recorded without retakes—the album is a raw taste of Phoenix’s psyche. Let’s Make Babies in the Woods is an honest and intense work created under experimental conditions, proving that some music is better left unpolished.