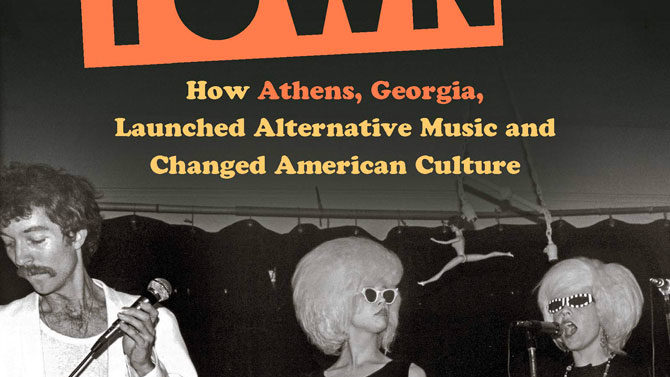 Jan. 25, 2011, Suburbia, NC: I’m crouching under the laundry room sink late at night, listening to my iPod Classic, waiting for my mom to turn off the TV and go upstairs so I can sneak out of the house, jog in the cold winter night to a nearby park, get a ride from a friend, and go see Jeff Mangum of Neutral Milk Hotel play at UNC-Chapel Hill.

Things didn’t go smoothly. During a commercial break, my mom walked into the laundry room, opened the dryer, and proceeded to fold its contents. I paused “Gardenhead” by Neutral Milk Hotel and receded further into the small space to the dryer’s left, certain she could hear my heart palpitating, certain my discovery was imminent.

But then she flicked off the light, left the laundry room, switched off the TV, and went upstairs.

I stared wide-eyed, sweaty, into the darkness. When my heartbeat stabilized, I pressed play. “The angels have slipped through our landslide/ And filled up our garden with snow,” Mangum sang, as I awaited a text from my friend. He’d had his own difficulties sneaking out, so I spent over an hour cooped up, before those sweet words appeared on my flip phone: “Here.”

Cautiously, I crept out of my nook, tiptoed into the kitchen and opened the backdoor. I congratulated myself on having greased the hinges the night before, and then slipped outside. There were stars in the sky and frost on the grass. I inhaled deeply, then set out to the park. My friend was there, grinning at me through the car window. I got in, and we were off.

Only to arrive at the locked doors of an empty auditorium—the show had ended.

“Shit man!” We muttered again and again. It seemed like if we’d managed to sneak out, get a car and drive this far, Jeff should’ve waited for us. We ran to the side of the building and yanked on that entrance. No good. We ran to the loading bay around back and tried that door—it swung smoothly out. Indie rock magic.

The door opened onto a tunnel-like hallway. We ran heedlessly through it and emerged—onto the empty stage. There was a stool. A white towel. A piece of paper. My friend dashed over and grabbed the paper: “It’s the set list!” he exhaled, triumphant. I peered wide-eyed over his shoulder, scanning the legendary song names: “Song Against Sex,” “Communist Daughter,” “Holland, 1945.” He tore the list in two and handed me one half.

Grace Hale, a former Athens resident and historian at the University of Virginia, has created a testament to the mythos of this place with her latest book, Cool Town: How Athens, Georgia Launched the Alternative Scene and Changed American Culture. Cool Town is a history of the origins and allure of the independent music scene in Athens—an allure that spreads beyond this town’s geographic confines, moving through speakers and earbuds into the hearts of would-be countercultural youths across the country. Although Cool Town focuses less on the Athens bands that hooked me and “my generation” (Neutral Milk Hotel, of Montreal, Circulatory System) than those bands’ hugely influential predecessors (Pylon, the B-52s, R.E.M.), it is fascinating to see the continuity between alternative ancestors and their spiritual progeny.

Hale is, perhaps, the ideal writer for this task. While her 626 footnotes and 96-plus interviews reflect the rigor of an academic historian, her energy and earnestness reflect the perspective of someone who was actually there. The best books about alternative culture, Hale claims, “were written by participants… What I love about these authors is how they stay true to the world they describe by blurring the boundaries between their roles as critics and scholars and their experiences as participants.” Hale, who earned her undergraduate degree at UGA from 1982–1986 and became progressively embroiled with Athens’ counterculture before pursuing a doctorate at Rutgers, performs this very fluidity throughout Cool Town. She switches easily between the first and third person, alternately saying things like, “Soon I was dragging my friends to R.E.M.’s free concerts,” and “People who saw R.E.M. then remembered Stipe employing a low and throaty catch in his voice.” This dual perspective allows Hale to do justice to both the personal experiences and public effects of Athens’ alternative origins. Hale conveys something of the ineffable, sensuous thrill of this time, describing the scrappy energy with which bands like R.E.M., the B-52s, and Love Tractor started and came to shape America’s musical landscape. She also analyzes how such bands’ visual and musical aesthetics affected American society at large.

As Hale shows, the birth of alternative culture in Athens wasn’t just about music; it was also about socio-cultural change. In the American South, where nontraditional models of masculinity, femininity and sociality were few and far between (and in many cases still are), Athens artists and musicians were hubs for exploring alternative ways of being. When the Athens artist and lyricist Jerry Ayers dressed in drag and evinced typically “feminine” behaviors, he offered a “powerful means of challenging [gender] conceptions.” He gave Athens musicians like Keith Strickland and Ricky Wilson of the B-52s new visions of what was possible. The B-52s, in turn, did the same for young Americans at large, employing a queer aesthetic “that was transgressive in both its content and its forms.” Parallel innovations, Hale argues, were achieved by bands like Pylon, who complicated the relations between innovation and amateurism, Southerness and progressivism.

But Cool Town also captures a contradiction that festers in most alternative cultures in the U.S. Often, socio-cultural concerns are valorized at the expense of economic or racial ones. Hale is clear on who formed, for the most part, the early Athens music scene: white middle-class kids. And, as Hale writes, “A bohemian penchant for elected poverty and denial of any desire to make money would not have been attractive to [working-class blacks] any more than… to most working-class whites.” Moreover, Hale recognizes that the central values of indie rock—independence and originality—hold a lot in common with the values of the market, which favors individuality at the expense of communality, endless novelty at the expense of social harmony: “The freedom to do whatever you wanted meant you could make your music your way. It also meant you could buy a historic house, kick out your bohemian renters, and raze it to the ground.” Fortunately, most Athens artists weren’t and aren’t razing historic homes or chasing away hipsters, but Hale’s point is clear. Independent music was not able, and has not been able, to extricate itself fully from capitalist logics.

As Hale puts it at Cool Town’s end, “It should not be surprising that alternative culture did not kill capitalism.” Yet, by facing these limitations squarely, Hale draws out the decisive accomplishments of Athens’ alternative music scene. If this scene’s original economic or racial politics left something to be desired, it nonetheless fostered and worked reciprocally with small businesses; it paved the way for new ways of creating and living; it emphasized the heterogeneous and local over the homogenous and standardized. And, on a purely musical level, it rocked. It rocks.