Of Montreal Kicks Off Latest Tour in Athens 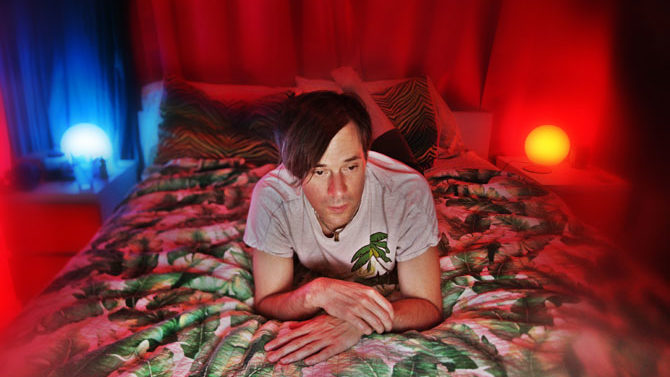 Of Montreal frontman Kevin Barnes gets right down to reflecting on his personal life on his latest record, simply titled UR FUN—no ethereal adjective-noun pairing necessary. On the album, sole  constant Barnes strays away from his 1960s psych-rock tendencies and takes a deep dive into all the neon and bubblegum that the ’80s had to offer.

This is the Athens legend’s 15th studio album in a 23-year period, a righteous pace that shouldn’t go without commendation. The organic work may be mistaken at first glance as a playlist of party tracks, but snaking around happy hits such as “Peace to All Freaks” are love songs for featured artist Locate S,1—aka Barnes’ romantic partner, Christina Schneider—and lyrics laden with political commentary. The record seamlessly surfs from the honeymoon phase of a new relationship to contemplating the ethical standards that have shaped modern America.

“There are other layers of the human experience that inspired it,” Barnes says, “more introspective songs about mental illness and dealing with dissociative disorder, anxiety, things like that.” Those themes propel songs like “Deliberate Self-harm Ha Ha” with biting intimacy. Barnes has dealt with the subject on past albums, but without listening closely to the words, his tunes could masquerade as cheerful bops.

It’s quite the range of emotions in under an hour across only 10 songs, but an even tone of effervescence holds things steady. These days, “people don’t really listen to a full record,” Barnes says, “so I kind of wanted to front-load it with the more positive, accessible songs, and then, if people wanted to get deeper into it, they could see that there were more layers to it. I wanted it to be something that, when it’s over, you kind of want to start it again, rather than feeling totally exhausted.”

Throughout the album, upbeat keyboard melodies illuminate strobe-like sensations, and Barnes’ voice slides over swiveling synth with total certainty. When this instrumentation takes the backseat, kaleidoscopic guitar harmonies take the wheel and bring light percussion along for the ride, staying true to of Montreal’s polychromatic palette while navigating uncharted territory.

“I think that it’s just my nature to want to explore different influences and try to not necessarily reinvent myself every time, but try to sort of unpeel another layer to see what else I can do,” says Barnes. “I always want to make something that feels like it still makes sense as an of Montreal record, but it doesn’t just feel like I’m treading water and trying to reproduce something that I’ve done.”

This is flawlessly executed in “20th Century Schizofriendic Revengoid-man,” Barnes’ personal favorite song for the cathartic experience it produces. This track finishes off the album and truly is the cherry on top, scooping cacophonous sing-speak atop saccharine guitar licks that pull from of Montreal, then and now.

The band, which has traveled all over the world, kicks off its next tour in its home base of Athens. When Barnes first moved here in the late ’90s, he was part of the notorious Elephant 6 art collective, a tight-knit community woven into the patchwork of the local music scene. “We’d all play on each other’s records, having potlucks together,” and the friend group steadily began implementing theatrics into their bands’ live shows, Barnes says.

It was this initiative that inspired of Montreal’s legendarily raucous performances. “Everyone had the same mentality, that we didn’t just want to get on the stage in our jeans and T-shirts and just do the street clothes thing,” Barnes says. “We wanted to make it feel more fantastical, psychedelic, immersive and cinematic.”

These descriptors could easily be used to reference of Montreal’s musical style, as well as its album cover art, so it is only natural that they be represented in the group’s live show, as well. On Thursday, Barnes and his band return to the Georgia Theatre to share the fun with a new audience in the town where it all began, more than two decades ago.