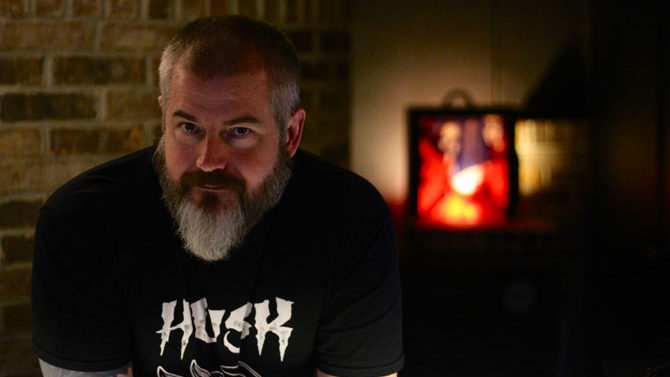 “Shadebeast is like that friend who’s obsessed with music [who] saves you all the time and tells you what to listen to,” says Joe Eldridge, the owner and founder of Shadebeast, the eclectic heavy-music store and collective nestled beneath Jittery Joe’s on Broad Street in downtown Athens.

Founded in 2016 as an e-commerce site, Shadebeast opened in brick and mortar form the following year in the Chase Park warehouses before relocating downtown in June. “It was something that I kind of always wanted to do,” Eldridge says. “I worked in a record shop when I was a teenager, and it was one of those dream kinds of things.”

Shadebeast has often been categorized as a record store, and while it does sell records, tapes and CDs, it’s also a clothing line, brand and creative outlet for all things heavy metal.

“Shadebeast, the core company, is a shop with a clothing line and music store,” Eldridge says, but adds that it has come to represent a sort of “ethical point of view… people have adopted the meaning, whether we intended it or not, that Shadebeast is kind of like independent, underground metal—the real stuff.”

According to Eldridge, since moving, business is at an all-time high. “A typical weekend in this location is about the same sales as in a whole month at the other location,” he says.

About a year ago, Eldridge and Shadebeast team members Daniel Shroyer and Markus Shaffer had the idea to bring more touring metal bands to Athens. “The intention with the showcase shows was initially to try and capitalize on the fact that a lot of touring bands have Sundays off, so we set those for Sundays to kind of give them a reason to come through and play that date, just to fill a gap,” Eldridge says.

Shaffer knew of a band from New York that was touring and had a Sunday available, so they booked it a show at The World Famous, one of the only local venues open on Sundays. Afterward, Shaffer contacted The World Famous’ owner to check in. “I was worried we had bummed him out by having three obscenely loud metal bands at his club,” he says.

Even though one band was so loud that a glass broke, the venue offered them more slots to continue the shows. After some organizing and logistical decisions, they started the monthly Shadebeast Showcase at The World Famous.

The idea for the showcases is to have a newer local band open up the show, followed by a more established regional act, then a well-known touring act. They are also making a point to not repeat the bills, so there’s always a different lineup. “Hopefully, people will just go to them because they know they’ll see something new every time,” Shroyer says.

This month’s showcase is centered around two touring acts, which lands the show at the Caledonia Lounge on a Thursday. Massachusetts’ High Command and Virginia’s Enforced will be supported by Athens groups Beast Mode and Apparition.

In the midst of all of this, Eldridge came up with the idea to start an online forum where he and other in-the-know metal fans could share new music. Eldridge says there are so many genres and subgenres of heavy music that it can get overwhelming.

“We created this think tank of metal fans, and then they invited their know-it-all fans,” Eldridge says. There are now daily recommendations for everyone in the Shadebeast Listening Club. “To draw 10 people’s attention to a release that would otherwise be ignored is way more satisfying than helping a band that’s already got a healthy fanbase,” Eldridge says.

Ultimately, Shaffer says, Shadebeast is bigger than the Athens community. “The name Shadebeast is out there in the ether, and it’s bigger than just the three of us sitting here.” He adds that their goal with the showcase is to give touring bands another place to go in Georgia by making Athens a “viable alternative to Atlanta, or even a preferable alternative, eventually. That is our general goal.”