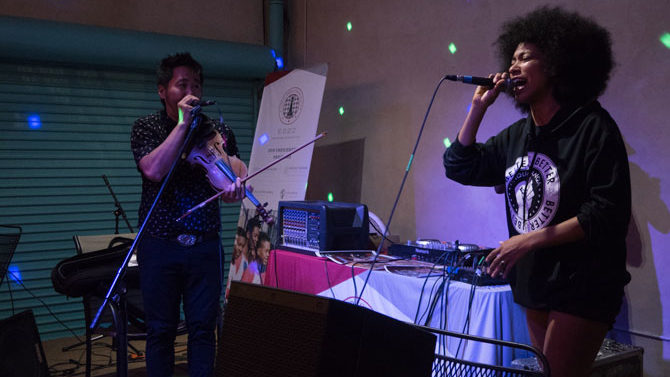 Two of Athens’ largest and best-attended events are the summertime AthFest Music and Arts Festival and this weekend’s AthHalf half marathon, both of which are fundraisers for AthFest Educates, a nonprofit organization whose mission is to support arts and music education in Athens-Clarke County. The group recently announced the recipients of its 2019 grants, which total $40,590.

Each year, youth development specialists and educators have six weeks to apply for a grant. Applicants may be anyone involved or working in local schools, nonprofits or government organizations. AthFest Educates Executive Director Jill Helme has been with the organization since 2014, and works closely with the grant committee and the AthFest Educates board to go through the many applications they receive. About 55% of applicants are funded every year.

“We have some really creative people in this town, and what they want to make available for young people is really fantastic,” Helme says.

One award is the Huang Torres Grant, which was awarded this year to Clarke County School District arts curriculum coordinator Dan Smith. With the award of $4,000, musicians Kaoru Ishibasi, aka Kishi Bashi, and Mariah Parker, aka Linqua Franqa, will visit and perform at eight CCSD elementary and middle schools. “Their styles of music are very different but blend together really well,” Helme says.

Last year, Ishibashi received an AthFest Educates grant for a similar project, and Parker joined him at one of the performances. “We had a really good time together and decided we wanted to do this full-time,” says Parker. “We both see the importance of youth of color, who make up the majority of Athens-Clarke County schools, [seeing] folks like them doing this sort of work.”

The two will collaborate on an interactive assembly for over 4,000 students. Ishibashi, known for his classically influenced violin looping techniques, will provide live music and beatboxing, while Parker will showcase her freestyle rap talents while using improvisation and movement to get the students involved in the performance.

“We wanted to bring some of that vibrancy and culture into the schools, so they can see what’s waiting for them out there if they take their craft seriously and go out and get involved, even [as] spectators—this cultural scene that they can be a part of as adults,” Parker says.

In addition to being a hip hop artist, Parker is the Athens-Clarke County District 2 commissioner, a third-year PhD student in language and literacy education at UGA, and a teaching and research assistant.

“One of the things that I really wanted to emphasize is that being a rapper and being a good student are not poles on a spectrum—they, in fact, can inform one another,” Parker says. “I think that one of the reasons I rap good is that I was a big old nerd when I was in school.”

Alongside the Huang Torres Grant, AthFest Educates awarded funding to 14 other arts education programs. The University of Georgia Performing Arts Center received a grant to bring professional dance, theater and musical performances to CCSD schools. Fowler Drive Elementary will invite local artist David Hale to partner with its students to create a large-scale mural and garden.

The Athens-Clarke County Library is starting an eight-week elementary music class, where students of all backgrounds can learn the basics of music and practice with instruments. Oglethorpe Avenue Elementary students will experience the Atlanta Opera’s Hansel and Gretel and interact with the performers after the show. Burney-Harris-Lyons and Hilsman middle schools are both receiving racks to display and protect student artwork.

“What seem like small grants have a huge impact on what students are able to experience,” Helme says.