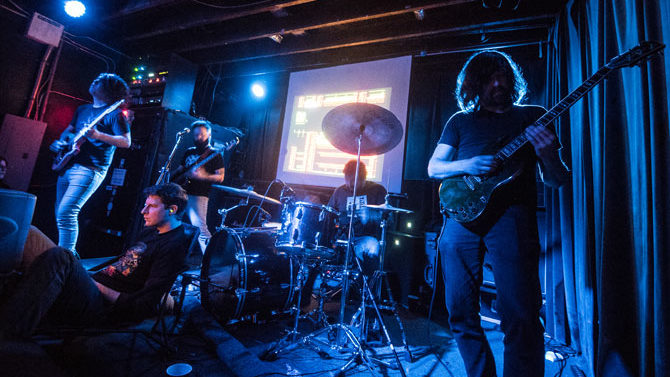 Athens’ one and only video game speedrun cover band Bit Brigade will wrap up its current tour—before starting another cross-country trek in October—with a show at the Caledonia on Saturday. The group’s basic concept is that it performs a Nintendo Entertainment System (NES)-era video game soundtrack while member Noah McCarthy plays the game itself, which is projected onto a screen behind the band. (This weekend, the group tackles both “Contra” and “Metroid.”) Though Flagpole has frequently written about and celebrated Bit Brigade’s live show, we’ve never done a deep dive into the games behind the music. This week, we take a closer look at six titles Bit Brigade has performed, with thoughts on why their soundtracks have endured long after their initial release. Consider this your back-to-school gaming list.

Considered by many to be the shining jewel of video game music from the NES era, the “Metroid” soundtrack is as haunting as it is beautiful. Tanaka’s restrained, slow-paced compositions perfectly encapsulate the isolation of the game’s iconic protagonist, Samus Aran, as she explores the hostile environment that is planet Zebes. Bit Brigade’s take reimagines the sparse ambience of the game into a rock-club-appropriate doom-metal package.

The “Contra” soundtrack is a direct reflection of the game’s 1980s action movie aesthetic. Many of the tracks sound like direct rips from film composer James Horner’s Commando score, which feels pretty fitting for a game about two Marines taking down an army of aliens who have invaded the Amazon. “Contra” marked Bit Brigade’s first foray into soundtracking speedruns, and remains a mainstay of its live sets.

The Legend of Zelda

Arguably the most iconic video game soundtrack of all time, “The Legend of Zelda” is deeply ingrained in the minds of anyone who grew up with an NES in their household. Kondo’s entire composition is less than 10 minutes long, but has inspired countless remixes and variations over the last 30 years. The simple but memorable sounds of the Overworld and opening title themes are still used in “Zelda” games released today, and inspire just as much wonder and awe as they did back in the ‘80s.

Of course, the “Ducktales” game includes an NES-style rendition of the television show theme. However, Tonomura’s collection of additional original tracks has held up as one of the most varied and exciting video game soundtracks of the 8-bit generation. “The Moon” is a particularly beloved piece. Way more intricate than what you would find on your average NES game—especially one licensed from a TV show—the track is now regarded by many as an absolute peak for music on the system.

The “Mega Man” games are well known for their music, with “Mega Man 2” generally regarded as having the best soundtrack of the mainline series. (The “Mega Man X” series has the best music in the franchise, if you’re curious.) Tateishi lightly remixes elements of the first game, but is mostly doing his own thing. Since “Mega Man” is based around fighting bosses in different themed stages, each stage has its own unique music. Tateishi’s compositions are so catchy that people who haven’t played games in years know the songs by heart. Surprisingly, he never really had a notable soundtrack before or after his work on “Mega Man 2.”

Adored by both vampire haters and lovers alike, “Castlevania” is a simple story about one man’s journey into a giant castle to find and kill Dracula. Despite its spooky premise, the soundtrack is largely upbeat and active, to match the game’s action-platformer gameplay style. Primary composer Yamashita, one of just a handful of female game composers at the time, is credited under the pseudonym James Banana—a take on James Bernard, who composed the score to Dracula’s 1958 film adaptation.