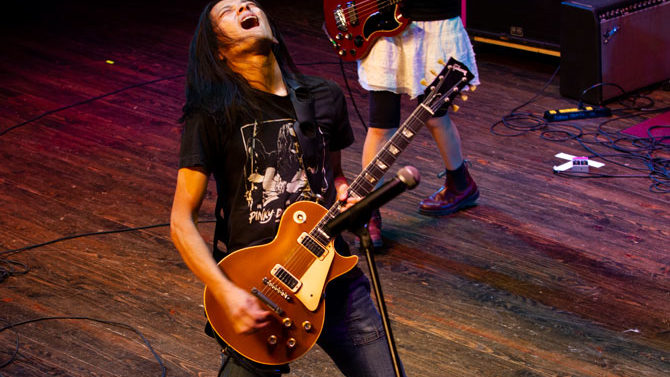 Editor’s note: Rottweiler is no longer on this year’s Slopfest lineup. We’ve left their blurb in, because you should still check ’em out.

This week marks the 10th anniversary of Slopfest. Initially conceived as a response to the death of Athens Popfest—before that festival was revived in 2016, only to officially fizzle out again a few years later—Slopfest has consistently served as the go-to celebration of Athens’ underground rock scene.

With a few exceptions, Slopfest books bands that don’t fit neatly within the lines of what one would expect from a traditional summer-fest headliner, focusing mainly on garage, punk and metal, along with various other odds and ends. Some, like returning festival favorite Monsoon—whose frontwoman, Sienna Chandler, can be seen gettin’ sloppy on the cover of this week’s Flagpole—are well established locally, while others are brand new and/or have barely any social media presence. (Though, how underground can a group be if it posts updates on Facebook as often as everyone’s least favorite aunt?)

Indeed, the DIY nature of SlopFest means that if you want to preview the lineup on your own, the process mostly involves navigating a sea of Bandcamp demos of varying sound quality. Some have track lists small enough to fit on half of a Post-It note, while others boast 30 or more songs with names so long they read like a crazed manifesto.

This year, Flagpole has done the heavy lifting for you by breaking down six of the most exciting acts playing Slopfest and arranging them into accessible, bite-sized preview blurbs. Whether you’re exploring the festival for the first time or are a seasoned Slopper™, be sure to keep our handy guide within arm’s reach throughout the weekend.

This Athens-by-way-of-Tokyo duo is an absolute monster when it comes to performing live. The group has played over 60 shows this year already, and who knows how many more will have been added to the list by the time this blurb gets published. Despite how frequently the band plays, its high energy guarantees that every appearance is a must-see. PDP’s pop-punk-flavored tunes are quick and easy to remember, so we strongly encourage you to sing or shout along as best you can.

Dynamic rock trio Mean Queen has been playing as fast and loud as it can for just over two years. The band’s debut EP, Take a Cool Pill—one of the best local releases of 2018—featured a potent blend of math rock, punk and pop. After a six-month touring break last year, the group has been playing consistently great live shows throughout 2019 while prepping new material for an upcoming release. (Whatever it puts out next, it’s hard to imagine Mean Queen coming up with a better song title than the amazing “Don’t Go Vapin’ Waterfalls.”)

Dead Vibes Ensemble is a relatively new metal outfit whose booming sounds are etching a new chapter into the Southern sludge tradition. The Shadebeast-affiliated band claims it’s “fueled by whiskey and loud amplifiers,” and it shows through in its songs. While DVE may just look like two dudes with a bass guitar and drum kit, it sounds like 100 druids yowling at the gates of hell. It’s pretty neat stuff!

Local dub and hip-hop artist Razzi King is one of the most overlooked figures in Athens music, as the quality of his output is vastly greater than the amount of public attention he receives. His latest album, Impassion, seamlessly incorporates jazz elements into Razzi King’s genre-hybrid style, resulting in his best work to date. Come ready to hear tracks so laid-back they make any song on the “chill lo-fi beats to study and relax to” YouTube stream sound like a damn joke.

Is it possible to create a supergroup in a setting as musically incestuous as the Athens punk scene? Rottweiler makes a good argument that it is. Featuring members of Tit, Apparition and Shaved Christ, among other bands, all of Rottweiler’s songs are loud, short and affecting. If you’re not looking for songs that are labeled in ALL CAPS and are less than two minutes long, you might as well stay home.

Solo punk project turned power-pop trio Hunger Anthem has been peddling its fuzzy synthtune wares all around the Southeast since 2011, and it’s still going strong. With a sound reminiscent of The Thermals, The Rentals and several other “the” bands, Hunger Anthem manages to feel nostalgic in all the right ways, even if you’re hearing it for the very first time. Hunger Anthem’s second full-length will be released this fall.