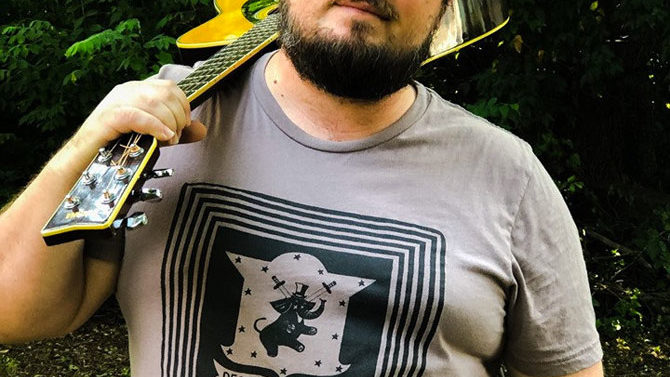 Local guitarist Michael Potter is wrapping up a tour in support of his latest release, Rain Song, a 21-minute, slow-building instrumental piece that starts with the familiar sounds of cars driving over wet asphalt during a light rainstorm. Guitar, drums, bass and synth elements are gradually introduced into the fold, until they completely overtake the sounds of the storm. It’s a mood piece, one with a familiar concept to fans of experimental or ambient music, but Potter’s execution feels uniquely expert and artful.

With backup from Web Hughes (Cult of Riggonia) on bass and Steven Ledbetter (Mani) on drums, Potter has crafted the perfect soundtrack for getting caught on Prince Avenue without a raincoat. The physical edition of Rain Song, released by the partially Atlanta-based label Already Dead Tapes and Records, contains three secret live recordings, including the aptly named “Go Bar Boogie.”

Potter’s discography reveals an artist frequently seeking out new sounds and not content with repeating himself. His solo work throughout the years has dipped into psych rock, drone, ambient music and beyond. Though he’s always willing to go in different directions, Potter doesn’t want that to define him.

“I don’t like using the term ‘experimental,’” says Potter. “I think we’re just talking about music that doesn’t follow the most basic Western pop music formula.”

The ethos of avoiding that basic pop structure carries over into Potter’s business endeavor, running a local tape label. Potter has been running Null Zone (stylized as \NULL|ZØNE//) since late 2016. Initially beginning as a way to release his own music, Potter has expanded the label and its roster significantly in the last three years. It boasts just under 40 releases, with 22 in 2018 alone, featuring artists such as Future Ape Tapes, Carey, African Ghost Valley and Potter’s own band, The Electric Nature. Twelve additional tape releases are scheduled for 2019.

According to Potter, there was no larger goal in mind for Null Zone other than putting out good music by himself and his friends. However, the label has grown to feature artists outside of Potter’s immediate circle. “Most of the releases on Null Zone came from me going to the artist and asking if they’d like to work with me and put something out,” says Potter.

Potter’s tape-making process is a relatively simple DIY affair. After he receives the music, he sends it off to Null Zone’s in-house album art maker, Atlanta-based artist Ellana Taylor. She listens to the music to get a basic idea, then usually draws “whatever comes to her head in that moment,” according to Potter. The dubbing of the tapes themselves requires anywhere from two to five tape decks, and can take upwards of a week, depending on how much time Potter can spare between shifts at work.

Because of the meticulous and sometimes slow-moving process, Null Zone’s release dates are occasionally pushed back. But Potter puts a big emphasis on the label not taking over his life.

“I just try to keep everything as stress-free as possible,” he says. “Sometimes, shit goes wrong, or I have to keep pushing back release dates. But everything is fine—we’re just doing this because we like doing it. There’s not much business to it, really. If a release breaks even to the money I put into it, that’s great, but there’s no mission or financial goal or anything for Null Zone. I just want to release good, interesting music.”

And though he may not agree with the terminology, Potter has gained a reputation as a sort of local gatekeeper for experimental and fringe music, which doesn’t get as much attention in Athens as it once did but comprises a thriving segment of the scene. “Athens is very crowded musically,” says Potter, “but I’d say there’s a small but healthy experimental scene that is very supportive of itself.

“This music isn’t for everyone,” Potter acknowledges. “I think there’s a squad of local folks that are really into non-traditional music, or whatever, so that’s nice to be a part of that community. It’s also nice to be recognized here and there from the larger national and international music community. But ultimately, it’s been great building new friendships with folks… it’s just been a fun and loving experience all over.”