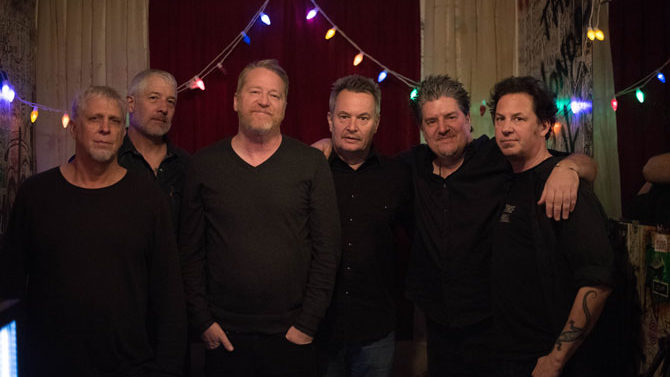 Long-running rock band Cracker and its L.A.-area punk predecessor Camper Van Beethoven have toured together for the past several winters. Both bands’ lead singer and guitarist, Athenian David Lowery, and their other current members end this year’s jaunt at home with the sixth annual Camp-In, a three-night event hosted Jan. 24 at Hendershot’s Coffee Bar and Jan. 25–26 at the 40 Watt Club.

The local tradition builds on past events in California and Virginia and brings together fans of two of the most eclectic bands to infiltrate the mainstream in the past 40 years. That’s not to paint the Camp-In as a nostalgia fest, as both bands built a shared fan base by continually embracing musical change.

For Camper Van Beethoven bassist and former Cracker member Victor Krummenacher, a stop in the Classic City reminds him of Camper’s dates on R.E.M.’s 1986 Pageantry Tour. That platform took the psychedelic punk oddballs from small clubs filled with like-minded peers to much larger venues and an unsuspecting mainstream audience.

“R.E.M. were a little straighter than we were, and we were not known,” Krummenacher says. “We were doing pretty long, psychedelic medleys. We’d have a segue between every song: cinematic and vaguely psychedelic. Pretty Pink Floyd—I’ll put it that way. There was a lot of confusion. Half of the audience cheering and half of the audience booing at the same time made for a very interesting sound.”

Camper Van Beethoven and its spinoffs, including Cracker and Krummenacher’s Monks of Doom, never stopped evolving creatively, and later made music that might’ve even wowed R.E.M.’s more selective fans. The handful of obvious Camper Van Beethoven singles—“Take the Skinheads Bowling,” “The Day That Lassie Went to the Moon,” a cover of Status Quo’s “Pictures of Matchstick Men”—never really defined or limited the surrealistic band’s creative boundaries.

Likewise, Cracker never fell back on being the band behind sporting-event super-jam “Low,” relying more nowadays on folk and country music than its alt-rock credentials.

Once the current tour ends, Krummenacher will focus on promoting a new solo album, Blue Pacific. The Mar. 1 release’s straightforward, autobiographical themes reflect the bassist’s love of folk storytelling as much as they build off the creative unpredictability of his bands.

This approach represents changes not just to the Camper camp, but also West Coast punk rock. Like solo releases over the years by John Doe, Greg Graffin and others, it captures the artist’s pre-punk roots without curbing his rebellious bent. By embracing more mature tastes, each punk rocker went from wishing Laurel Canyon would burn to the ground to openly appreciating California’s folk and country-rock legacy.

“As you get older, you start to understand that a good song is a good song, and the way it’s dressed up is less important,” Krummenacher says. “That’s kind of key to growing up. You’re defined by what you came up through, but you have to learn to transcend it to some degree.”

Despite the internet making the musical world smaller, the similarities between the story-driven songs of Hank Williams and X still get lost on some rockers without cool, older relatives.

“That’s what I’ve always appreciated about people like Patterson [Hood],” Krummenacher says. “They come from a musical legacy. I didn’t come from a musical family. I just kind of went and figured it out. There was one other professional musician in my family that I knew of. Patterson’s dad [David Hood] is a very famous bass player who’s worked on some of the most influential music of the 20th Century. He never challenged that lineage, and I think it’s a fool’s game to pretend you’re doing something new.”

After Camper Van Beethoven first broke up in 1990, Krummenacher had no idea he’d still be adding to his own musical lineage nearly 30 years later. He’d taken a day job long before Camper Van Beethoven reformed in 1999. He later joined Cracker for a spell, performing on the band’s 2006 album, Greenland.

A large, loyal fanbase has followed Camper Van Beethoven and Cracker across decades and lineup changes, giving Krummenacher and his colleagues a reason to maintain ambitious tour schedules and continually push their very loose creative envelopes.

“People really appreciate what we do,” he says. “I think the appreciation has kind of grown. It’s almost like a responsibility. I feel like the legacy of Camper Van Beethoven is almost more important to the people who enjoy it than it is to me. The songs mean a lot to them, so I try to give them the best I can. People come year after year, they bring their kids, and we still sell out shows. It’s not a small deal.”