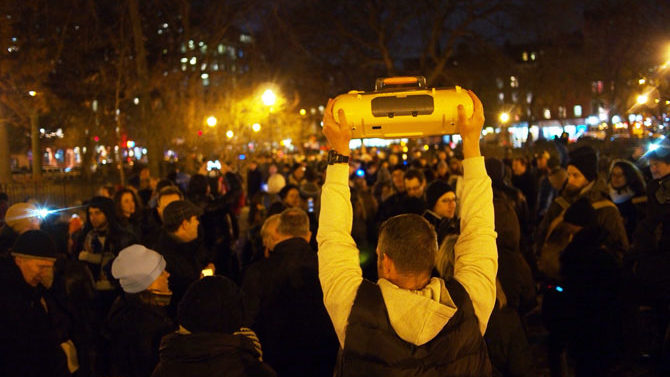 Returning for its eighth year in Athens, Unsilent Night will take place the evening of Friday, Dec. 7. The sonic parade will begin just outside of Little Kings Shuffle Club and march through downtown Athens and the UGA campus, filling the streets with unique sounds that promise to bring holiday cheer.

Unsilent Night began in the early 1990s, when New York composer Phil Kline wrote a four-part minimalist orchestral piece that was meant to be played outdoors in December in a group setting. Originally, participants were given one of the four tracks on cassette, and the tapes were played simultaneously on boomboxes. As technology has evolved, so has Unsilent Night, and the piece is now heard on phones, bluetooth speakers and more.

The piece was written specifically for the holiday season, to provide a sense of joy and family, and that’s more important now than ever, says Kline. “It’s just a gift,” he says.

When Kline wrote the piece, minimalism was at its peak, and the form heavily inspired Unsilent Night, which features droning textures, echoey vocals, bells and beats. During the first few years after its origin, Kline changed and added parts until he felt it was done. Since then, it has remained the same.

The first performance took place in New York in 1992. Since that time, Unsilent Night has gained popularity all over the world. This year, over 30 U.S. cities will participate. The piece has also been performed in Berlin, Belgium, Hong Kong, South Africa, Australia and Brussels.

Kline says he didn’t have a plan to continue it after the first year, but he and his friends had so much fun that they kept it going. Kline still leads the annual performance in New York. Each year, he and his daughter, Clementine, start off the event by counting down and yelling “go” in the middle of Washington Square Park.

Each participant is given a recording of one of the four parts, and all press play on their devices on cue. Given the inexact nature of the performance, the piece sounds different each time. “It’s sort of like taking a psychedelic bubble bath,” Kline says.

Athens’ Mark Mobley decided to bring Unsilent Night to our city in 2011. Since then, he and Rachel Watkins have organized and led the performances. “It’s the closest a non-musician can get to the feeling of playing in a symphony orchestra,” Mobley says.

Since its beginning in Athens, the amount of participants has grown, and this year, the event is being held earlier in the month to allow more college students to attend.

Indeed, in Athens and around the country, the number of people and degree of participation continues to grow each year. “Many artists worry, ‘Is any of the feeling I’m putting into this being received on the other end?’” Kline says. “With Unsilent Night, it really seems to happen.”

Mobley says it has become so ingrained in his holiday routine that the season wouldn’t be the same without it, just as The Nutcracker or any other Christmas tradition. He wrote an article for NPR about Kline and Unsilent Night, saying the piece transforms “the coldest urban area with the warmth of musical fellowship.”

Kline and Mobley emphasize that Unsilent Night is a fun, family-friendly event for everyone to enjoy. The piece was made for the holiday season, but doesn’t specifically align with any belief system. Instead, it functions as a standalone piece that people of any background can enjoy. “It’s a completely transcendent hour in the middle of a really stressful season,” Mobley says.

For more information on how to participate, visit unsilentnight.com.