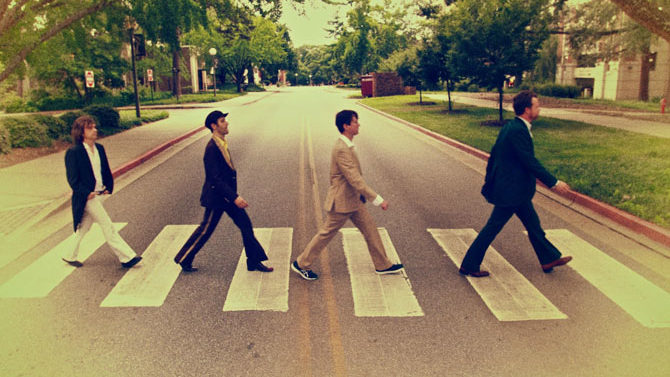 When Athens musician Michael Wegner decided to cover The Beatles’ Abbey Road with his band in the early ’90s, he had no intentions of turning the act into a long-term gig. That’s exactly what happened, however, after he played the album with his group, Fuzzy Sprouts. The performance went so well, he decided to form a band that devoted itself to playing The Beatles’ music, aptly named Abbey Road Live.

Abbey Road Live was formed in 2002 and was originally dedicated to playing Abbey Road only. Since then, the group has greatly expanded its repertoire. Though the band can play almost any track ever recorded by the iconic English rock group, they mostly specialize in playing albums in their entirety.

This includes the self-titled White Album, which was re-released earlier this month in an expansive 50th-anniversary package that includes a remixed version of the album courtesy of producer Giles Martin—son of Beatles producer George Martin—as well as previously unreleased demos and session recordings. Friday, Abbey Road Live will play the Georgia Theatre in support of the reissue.

It’s because of that variety that Abbey Road Live has kept performing over the past 16 years. Wegner says that if he were covering another band, he almost surely would have given it up by now. To him, the music written by The Beatles is different. He says he has always loved the group and wants to share that love with anyone who will listen.

“With The Beatles, you’re taking some of the greatest music that was ever written and spreading it,” Wegner says. “It’s satisfying to be able to spread joy that way.”

Yet Abbey Road Live is not a typical cover band in how it interprets its source material. Wegner says he wants to recreate what it would have been like to see The Beatles if they had continued performing, which means incorporating experimental and improvisational elements. Instead of dutifully playing a typical three-minute track, the members add in solos and riffs that extend songs up to double their length, as they think The Beatles would have done.

In addition to taking creative liberties, the band also differentiates itself in that it does not try to re-create the style or personas of The Beatles’ members. Wegner says he has never done a fake British accent for the sake of a show—nor does he want to.

“We don’t look like them, and we don’t try to be them, but we do put a lot of detail and accuracy into the songs themselves,” Wegner says. “We try to do what we imagine The Beatles would have done, had they not stopped performing live in 1966.”

Though all the members enjoy playing with Abbey Road Live, they have made a decision to keep the band from being a full-time commitment. In addition to other musical projects, the members have jobs and families to attend to, which keeps performing with the band from becoming stale.

Abbey Road Live plays about 50 shows a year and tours once or twice a year, focusing largely on the West Coast. The Georgia Theatre concert is a great chance to check out Athens’ favorite tribute band—a show in an iconic venue where Beatles fans can hear the closest thing to a live performance of a classic album that’s once again in the spotlight.