Classic City Rollergirls Gear Up for a New Season 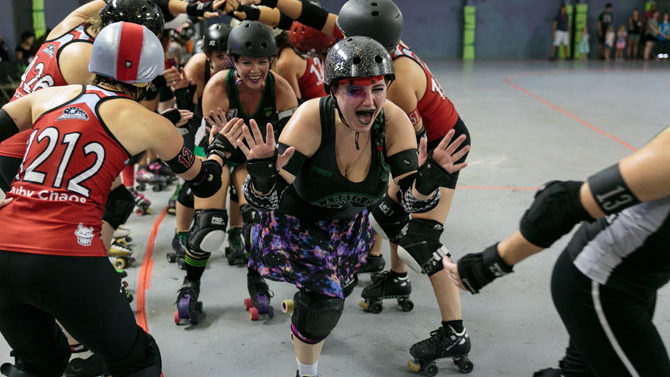 As winter comes to an end, the people of Athens are ready to roll into a new season, and the city’s roller derby squad is no exception. The Classic City Rollergirls are preparing for what they hope will be their most triumphant season yet.

The Classic City Rollergirls are currently in the midst of their bi-yearly bootcamp, which is open to the public and serves as a way to assess talent and train new members. More experienced and serious members will make up the competitive “A Team,” and members who seek to participate in a more casual capacity will make up the “B Team.”

Though the girls plan to skate into their newest season with their usual confidence and overall bad-assery, the team will look much different than last season. Due to team transfers, retirement and the chaos that is everyday life, around 18 members have left, leaving the Rollergirls with about 25 members overall, which is five less than they need to make up both teams.

Luckily, the girls are only in the midst of Week Two of bootcamp, which takes place every Saturday through Mar. 21. There’s still ample time for newcomers to join, and more experienced skaters may be permitted to expedite the bootcamp process.

Team captain Angie Cleland, known to fans as Violet Konduct, says she had no idea what she was getting into when she joined the roller derby four and a half years ago. “I went to an open skate at one of the rinks and someone gave me a flyer, so I thought it was just a way to get some good exercise,” Cleland says. “After a couple bootcamp sessions, I was hooked.”

The Classic City Rollergirls have made a name for themselves over the years, but roller derby isn’t just an Athens thing. It is one of the fastest growing female sports in the world, with co-ed and male teams emerging as well. 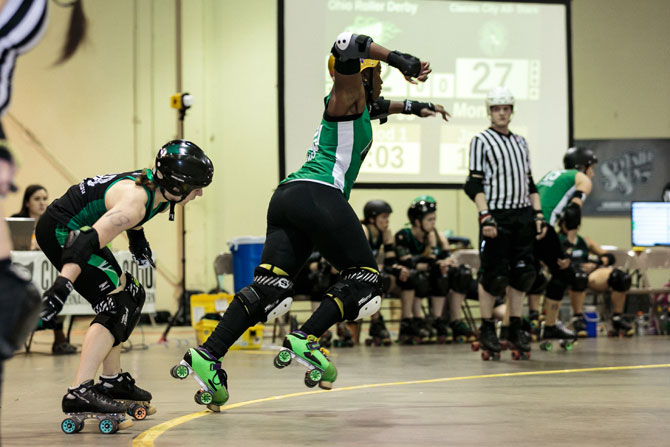 B’easy knocks a jammer out of bounds during a bout against Ohio Roller Derby in Columbus OH on June 29, 2019. Photo Credit: John Blood

Cleland wants to emphasize that roller derby is nothing like the 1970s roller girl trope that once saturated the media. “Roller derby is an intense sport that has complex details and rules,” she says. “It’s certainly a real sport and should be recognized as one.”

For those who are unfamiliar, here’s how roller derby works: There are two teams with five players in the rink at a time. One member of the team (the jammer) must attempt to pass four players (the blockers) to score a point. The players are allowed to push one another out of the way, which is where the sport’s rough reputation comes in. The players cannot use their heads, elbows, forearms, hands, knees, lower legs or feet to block opponents.

Though roller derby certainly isn’t for the faint of heart, Cleland says the sport doesn’t have to be so serious. With a husband and three kids to look after, she says roller derby is one thing that is all her own. “Roller derby can be anything you want it to be,” Cleland says. “It can be exercise, a network of fantastic women, stress relief, an escape… We welcome anyone in any capacity they want to participate.”

The Rollergirls’ needs don’t just include A team members, but referees, casual skaters, non-skating officials and donors. Cleland says the team’s biggest goal for the season is to train and grow the newest members’ skill sets and retain those members for seasons to come.

The Classic City Rollergirls’ next game, called a bout, will take place on Saturday, Mar. 14 in Charlotte, NC. The next home bout is scheduled for Saturday, Apr. 4 at Athens Arena, 280 Commerce Blvd., off Atlanta Highway.

To find out more information about the rollergirls, donate to the cause or see the full season schedule, visit classiccityrollergirls.com. To become part of the team or see if roller derby is your thing, go to the rollergirl’s bootcamp every Saturday through Mar. 21.