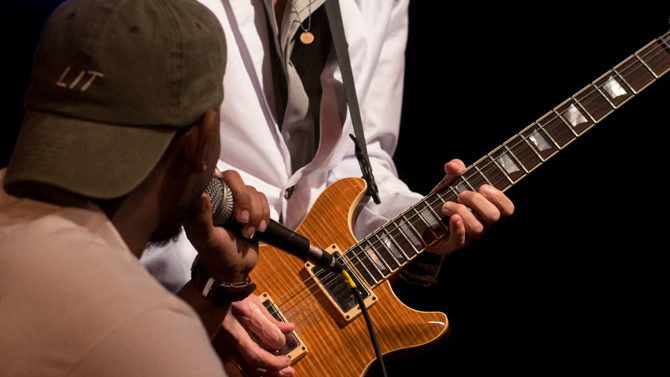 For the fifth consecutive year, Athens in Harmony seeks to bridge social and racial gaps in Athens through what the city knows best: music. The concert will feature 20 of Athens’ most talented musicians paired across racial and stylistic lines, and each group will prepare and perform a duet with a backing band. In the past, the concert has resulted in some unlikely team-ups, leading to a unique experience for both audience and performers, and even some newfound friendships.

Concert coordinator Pat Priest says that, in that respect, this year will be no different. She says she tried to represent every genre of music in Athens, from young rappers to seasoned singer-songwriters.

“We pair people across ethnic and racial lines, genre differences and generation gaps,” Priest says. “It’s fun to see such different artists make great music together, but beyond that, we’re forming bonds between people who may have thought they had nothing in common.”

Priest started the show after participating in a rally in Athens five years ago. The rally was meant to protest police brutality, but Priest says there were people calling attention to the deaths of police officers, as well. Despite the tension, Priest saw then-police chief Scott Freeman and Mokah Jasmine Johnson, co-founder of the Athens Anti-Discrimination Movement, standing together. She says witnessing that display of unity inspired her to create an event that would recreate the feeling of togetherness.

Priest says this year’s show will represent more genres than ever before. Jazz singer Mary Sigalas, R&B singer Tony LaFrance and Latino composer Luchito Muñoz are just a few of the artists who are scheduled to perform, with many of the duos featuring musicians from completely different stylistic backgrounds. The groups were decided in a live drawing at the event’s kickoff, where many of the artists met one another for the first time.

Mayor Kelly Girtz will co-host the show alongside Johnson. The hosts represent the overall theme of the event, which is bringing individuals of different backgrounds together to support a common cause.

Though Athens is a progressive town with a left-leaning government, Priest says there is still work to be done. She describes Athens as existing in two different dimensions—people separated from one another by seemingly insurmountable differences.

“It’s as if we who are white live in one dimension, and then there’s another dimension of people of color who are often marginalized,” Priest says. ”To be put in this same dimension is fun and helps form friendships and bonds.”

In addition to the duets, the show will feature “capsule stories,” or short anecdotes about an artist’s individual experience with racism or prejudice. The show will end with a rendition of John Lennon’s “Give Peace a Chance,” featuring all the artists in the show, including a hip hop section in place of a traditional verse.

Proceeds from the concert will benefit the Athens Anti-Discrimination Movement, which was originally founded to prevent discrimination in downtown bars. The organization has recently expanded its interests to promote a no-cash-bail ordinance and an Athens-Clarke County inclusion department.

Priest says that, above all, the event is about bringing people together, however unlikely the collaborations might be.

“What I hope for is that we have long-standing relationships that will be developed,” Priest says. “And I know that, in some cases, we will.”