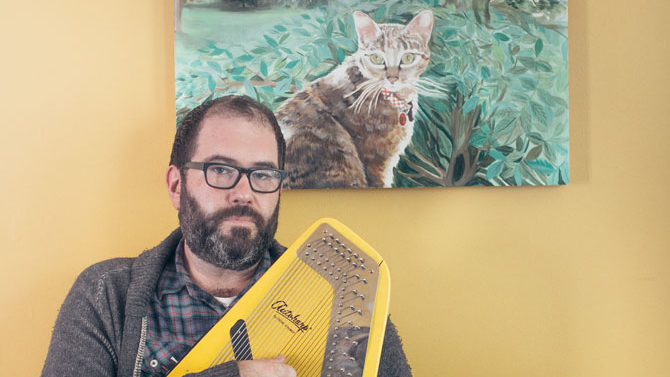 Singer-songwriter Owen Ashworth has been playing emotional, story-heavy synth tunes for over 20 years. For the first 13 of those, he performed under the name Casiotone for the Painfully Alone, playing lo-fi pop tunes on cheap Casio keyboards. After retiring the name in 2010, Ashworth reappeared as Advance Base. His penchant for songs built on personal anecdotes and stories remained, but the overall sound was a little quieter and a lot more sonically expansive. Advance Base’s latest album, Animal Companionship, is built around analyzing the relationship between people and their pets, and how that reveals what it means to be human.

Flagpole spoke to Ashworth ahead of a show at The World Famous to talk about Animal Companionship, his songwriting process and how sad music can help people through difficult times.

Flagpole: Give me a rundown of your new album and its themes about pet ownership.

Owen Ashworth: As long as I’ve been writing songs, the songs have been about interpersonal relationships and just trying to figure out the way people regard and treat each other. Using people’s relationships with their pets just seemed like an interesting new angle for me to talk about human relationships.

I actually don’t have a dog—I have cats—but I have plenty of friends with dogs. I feel like that’s always a pressing concern with a dog owner—there’s a lot of neediness in that relationship, on both sides. I think animals can often be proxies for human relationships, or reflections of relationships with other people.

FP: What’s your process of taking a story from your life and transforming it into a song?

OA: Story-based songs have always been the kind of music I’ve been the most attracted to. There’s a lot of country and soul music I listened to growing up that was really narrative-based, and that’s always the kind of writing I’ve aspired to. Usually, there’s just a line or two or a vocal melody or a certain feeling that I’m trying to chase down. That initial melody will give me a feeling, and I’ll do my best to describe a scenario that hopefully helps everyone else arrive at that feeling.

FP: Do you typically compose your instrumentals first, or do you start with the story?

OA: There’s usually some skeletal version of the instrumental to begin with. Sometimes, it’s just a chord change or a certain sound or sample—some kernel that’s very abstract that I’m building up from. Usually, I’m writing the lyrics and the music in tandem, and one is building off the other. More often than not, it will take me months and months to write a song, and I’ll be working on a bunch at the same time. There will be incremental changes to the lyrics and the arrangements over time until it finally feels finished.

Playing a song live is also a really important part of that—making sure I’m comfortable with how it feels singing it in front of people, and making sure the arrangement works the way I want it to.

FP: You’ve labeled your music as “weirdly uplifting.” What does that term mean to you?

OA: It’s just something that someone said to me at one of my shows. Someone told me that they had heard my music was depressing, but after coming to see my show they said I was “weirdly uplifting.” An important thing for me is to make music that acknowledges difficult things in life, but at its core, I want it to be optimistic about talking about and sharing these things with people.

I think the point of sharing dark stories is that it helps you get through it, and that’s a universal feeling that I don’t think people should be afraid to acknowledge. It’s not my intention to wallow in darkness, but just to recognize that it’s there, and to show that you can push through it.