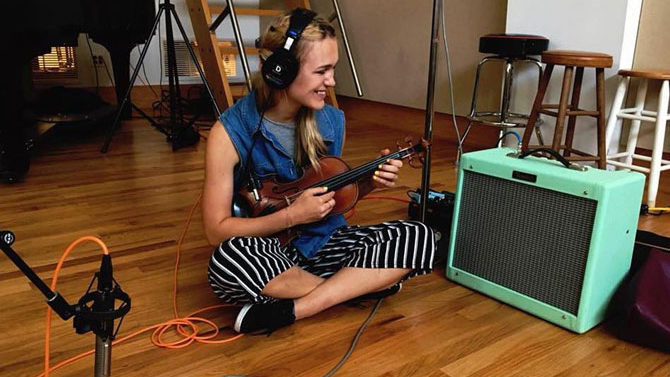 “I did all the things,” local violinist and composer Annie Leeth says of her debut album.

Leeth is a fourth-year composition and performance major at the University of Georgia. While balancing school and work, she has kept music at the forefront. In March, she released an EP, Heard, and on Nov. 1, she’ll release a full-length, Recurrence. The album features six new originals, a collaboration with Athens’ Sephine and a reimagining of Andrew Bird’s “Beyond the Valley of the Three White Horses.”

Written, produced and engineered by Leeth alone, Recurrence blends electronic and contemporary classical music into a minimalist package. Taking inspiration from Kishi Bashi, Steve Reich and anything “melancholy and chilled out,” says Leeth, her use of loops and soundscapes—textural heirs to the ambient drone of pioneers like Brian Eno—give listeners something new to consider.

Leeth says most of the original songs on Recurrence started as single loops and built from there. “I never really know if it’s gonna actually become a song, or if it’s just gonna just be an exercise in something,” Leeth says. After much improvisation and trial and error, the songs were finished when Leeth decided they were good enough.

Leeth says writing and crafting songs is a way to balance herself. During the process of recording, Leeth altered and obscured her source loops to make them more organic and less obvious. Throughout, ideas were added and subtracted as needed.

The resulting compositions are diverse, patient and often breathtaking. One standout is “Once,” an effects-heavy piano number. Leeth says it was a one-take recording. In the studio with a piano, Leeth decided to play around on it and record herself. Quickly, it became a song.

“Frogs” is a collaboration between Leeth and Sephine’s Will Anderson, who also plays with local country-influenced band The Pink Stones, which formerly counted Leeth as a member. Like many of the other songs on the record, there wasn’t really a plan, says Leeth—it just happened.

Leeth tracked, mixed and mastered Recurrence herself using programs like Logic and Pro Tools. “It was kind of an intentional thing. I wanted it to be like, ‘I’m not gonna let anyone else touch this,’” she says. While attending the Recording Workshop in Chillicothe, OH, Leeth said she spent much of her time in her room with her recording equipment. She also recorded parts of Recurrence at UGA’s on-campus studio.

As a student in UGA’s music business program, Leeth began interning and eventually working at Athens studio Chase Park Transduction, where she further developed her engineering and producing skills. Outside of sound engineering, Leeth has appeared as a studio and live violinist for artists like Faye Webster. Leeth says she hopes to continue collaborating with others and trying new things on both sides of the recording booth.

She also wants to spark a merger in Athens of classical and popular music. Leeth says one of her professors often talks about the lack of music students in bands, and she agrees that it’s an “untapped market” when it comes to the local scene. “As a whole, I think that it would be really great if the two were melded as a little bit more of a microcosm for the entire classical versus non-classical world,” Leeth says.