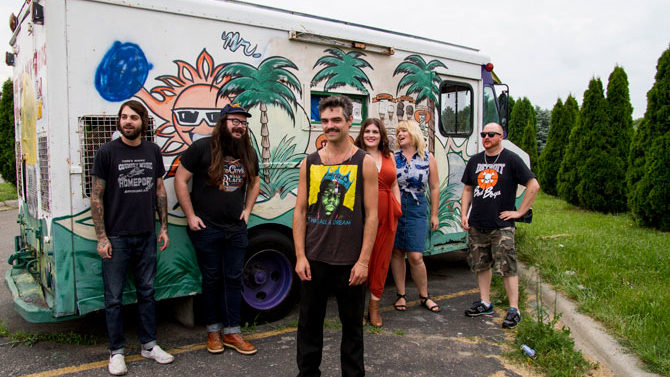 A lot of good, new stuff that’s labeled as Americana—from metal singer turned Texas troubadour Cody Jinks to that rumored Black Lips country album—reflects the changing tastes of rock musicians. Add Craig Brown, a longtime member of the Detroit-based Terrible Twos and Michigan/New Jersey collective Liquor Store, to that list. His Craig Brown Band’s recent run of success isn’t just part of a new trend, though, as its 2017 full-length on Third Man Records was the culmination of years of bedroom recordings and garage-punk friendships.

“I’ve been recording music in this sort of genre with mandolins and banjos since I was 20, and I’m 34,” Brown says. “All of this stuff started with me doing this stuff with a four-track for years and years.”

A single issued by Eric Love of Urinal Cakes Records’ Western Where imprint landed Brown a booking at the 2014 Hamtramck Labor Day Fest before he’d even formed a live band. The next thing he knew, Brown caught the attention of Jack White, a fellow Detroit rocker with good taste in country music. That connection found the new group opening for hardcore staple Negative Approach at Third Man’s Detroit location and ultimately cutting a single and album for the label home of Margo Price and Joshua Hedley. Dave Buick, a longtime friend of Brown’s and the head of Italy Records—the first label to issue a White Stripes single—helped speed up the new band’s rise up the Third Man ranks.

Brown’s current musical direction began with reference points shared by cowboys and rockers. “My gateway to country was when someone played me Sweetheart of the Rodeo,” he says. “That record made so much sense. I already knew The Byrds, but I didn’t know they had this twangy thing going. That led me to stuff as old as Hank Williams, [and] to Alan Jackson and Randy Travis.” Plus, he adds, “I always liked the twangier sound of the Stones’ Sticky Fingers and stuff like that.”

The Craig Brown Band’s backstory—a recording project that gained steam as a live act—and lyrical content don’t stray far from punk rock tradition. For example, debut Third Man single “Overthinking” is about the freedom that comes with living out of a van. Country singers put a lot of work into touring, as well, but there’s something way more rock and roll about the idea of barreling down the highway in a ride that’s liable to break down at any time. Such inevitabilities turn life-affirming adventures into stressful situations. The latter scenario gives Brown the blues in “The Planet Song.”

For Brown, who’s lived out of vans in between jobs for years now, some things never change. “We’ve had insane ups and downs,” he says. “The downs seem a lot crappier in this band, when you’ve done such crazy shit as open for Dwight Yoakam or play at the arena where I watch the Pistons play at, opening for Jack [White]. Then, you break down on the way to Pittsburgh for a show they didn’t know you were supposed to play, and you’re like, ‘What am I doing with my life?’”

By migrating with others from beneath the wide and nearly indefinable garage-punk umbrella into Americana territory, the Craig Brown Band is tooling down highways to play with bands with similar backstories. One of the Athens openers is Nashville-based Country Westerns, featuring former local musician turned Music City bar investor Joey Plunkett. Another Nashville band called Teddy and the Rough Riders will play, as well, serving as a reminder that good stuff exists beyond the constraints of Music Row.

After a decade-plus slow burn, Brown finds himself playing country-influenced material at a time when some of the best music within those loose parameters comes from folks who were involved in underground rock scenes for years. Instead of positioning themselves to get noticed by roots tastemakers, acts like Brown look to kindred spirits like White, a fellow Midwestern punk whose appreciation for Wanda Jackson and Loretta Lynn positioned him to lead a new wave of country rockers and Nashville rebels.