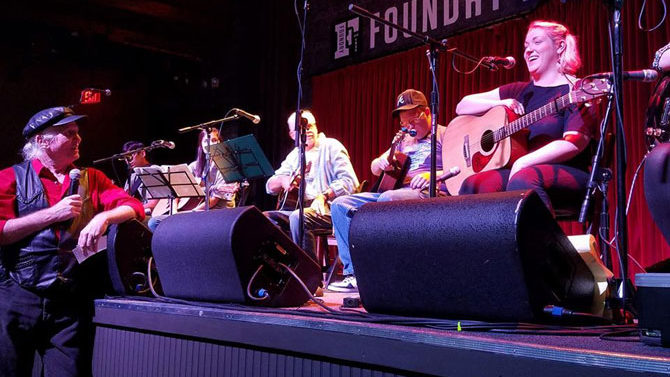 At this point, Best of Unknown Athens is a bit of a misnomer, as local musician Liam Parke’s singer-songwriter showcase at The Foundry often highlights some pretty well-known talents. If Parke has his way, the monthly event might expand its reach beyond Athens’ creative community and even infiltrate the airwaves.

Since the series debuted more than three years ago at a since-closed Buffalo’s Cafe, Parke has opened the stage to 185 Athens-area talents, including such heavy hitters as Levi Lowrey, Adam Payne, Hunter Grayson, Betsy Franck and others. This focus on local and regional songwriters has become a choice, not a necessity, for the event’s promoter.

“I get inquiries all the time from booking agents, from managers and from people who are touring act representatives,” Parke says. “We’re going to probably have a touring act show just as a different wrinkle, because I’ve been doing this for three and a half years. I always try to have a different theme for the shows.”

The possible expansion is due in part to Parke’s growing confidence as the show’s director and master of ceremonies.

“Part of the art is putting the right people together on the show,” he says. “Otherwise, the magic doesn’t happen. Anybody can get up there and play… but to get up there with a group of people who all stay on the same page at the same time and don’t leave the stage is a different kind of thing. It’s not your typical ‘in the round,’ or whatever you’d want to call it.”

At Best of Unknown Athens, artists take turns playing one song at a time, with individual performances followed by questions from Parke and the audience. “That way, I can tell anybody that’s interested that they can stop by between 7–11,” he adds. “If you’ve got 45 minutes, you can hear everybody play.”

When Parke goes to Hendershot’s open-mic night and other local spots to scout actual unknowns, he says he has no trouble getting approached by established names. He says local talents trust the reputation of the event and Parke’s own bands, including the Irish-themed Repent at Leisure and newer ensemble True Born Sons.

“They know I’m a singer-songwriter, and they know I’m not going to ask them questions that embarrass them or put them in a position where they have a greater chance of failure than success,” Parke adds. “I was a baseball coach, and that’s how I view myself as a band leader in my band, or as the host and producer of Best of Unknown Athens. My job is to put them in the position to have the time of their lives and enjoy themselves so much that they can’t wait to come back.”

Parke encounters these theoretical ballplayers around town and in attendance at each month’s showcase. “We could almost call five people out of the audience to replace the people on stage, and it’d be just as good a show,” he adds.

With his ear for songwriting talents and experience as a filmmaker and screenwriter, Parke envisions the concert series as a possible multimedia project. “It’s a show that has potential, if we get the funding, to be another ‘Austin City Limits,’ if it’s a TV show, or like ‘Mountain Stage’ if it’s a radio show,” he says.

In addition to radio or television possibilities, Parke says a multinational exchange of sorts may happen in the coming years. He says two Canadian Broadcasting Corp. employees from Toronto caught a show while in town and expressed interest in having a crossover event, with local talents going there in exchange for an Athens-hosted showcase of Canadian artists. Parke adds that he has also been in talks about a similar event in Ireland.

At its core, Best of Unknown Athens remains a chance for local music lovers to hear new, exciting talent. At a time when songwriter-driven folk, country, blues, rock and soul is in high demand, Parke’s series makes for a one-stop shop to hear music that’s both genuine and, for the time being, local.