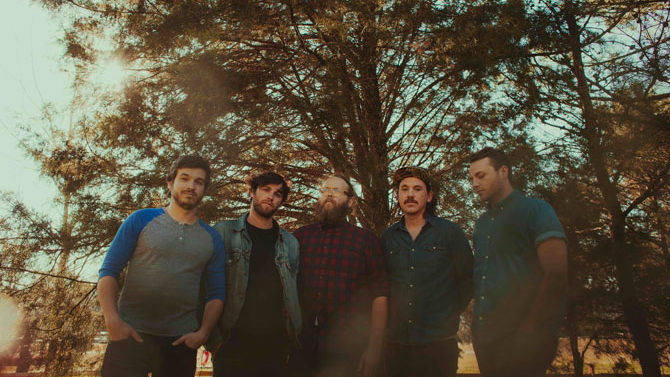 To go from the folk-pop outfit heard on its amorously-titled debut EPs—2014’s Love You Mean It and 2015’s XOXO—to the hard-to-define creative force behind recent album Felix Culpa, Athens-born band Family and Friends had to embrace change and shed a sonic approach that had already netted it critical acclaim.

For guitarist and singer Mike MacDonald, it was the latest life and creative change made possible by the Atlanta native’s 2008 decision to attend the University of Georgia. A saxophonist and pianist in high school, MacDonald became a self-taught guitarist and singer-songwriter in his late teens. His folk songwriting method from back then helped define those early Family and Friends EPs.

Even with a little musical know-how, he didn’t have the drive to start a band before gaining some DIY guts by discovering the Athens band Reptar and befriending its members. Roadkill Ghost Choir and Futurebirds have since provided further inspiration. “Just to see people our own age doing it and making it happen was incredibly inspiring for us,” MacDonald says.

“When we first started, it was kind of in that folk-pop revival context,” he says. “We knew we wanted two drummers. I’d write songs on the acoustic guitar, and we’d flesh it out from there. We stay away from that sound these days, and take into account everyone’s personal tastes and different influences. We’re trying to shed a little bit of that folk element.”

MacDonald’s willingness to share more of the songwriting load allows for an eclectic album, with Felix Culpa’s songs ranging from the folk-friendly “Winding Roads” to the unpredictable “PRSM.” Both songs have a full, theatrical feel that seems to be the band’s new calling card. Such experimentation was a bold choice, considering the seemingly guaranteed hype that would have greeted a full-length album based around the band’s prior, more accessible sound.

Despite generally writing Americana music when he breaks out his acoustic guitar, MacDonald’s preferred mode of songwriting knows no genre boundaries, and has been further realized since allowing others in the band to have more of a creative voice.

“It was tough at first, because it was a new writing process to navigate,” MacDonald says. “I can personally be somewhat stubborn in those situations, but I think we came up with things we wouldn’t have otherwise. We’re not necessarily a band that wants to stay in the same place. We want to try new things, and this writing process at least proves we can do those things.”

The band’s early approach allowed its members to grow musically through more orthodox means while dreaming up a hazy new vision. “It provided a context for us to evolve around, to an extent, where we knew how we did write songs, what we could change and what might work better,” MacDonald says.

Coming of age in Athens encouraged the band to pursue a raucous live show that feeds off the energy of college-town audiences. “I don’t ever want to be a band that sounds exactly like they do on the album live,” MacDonald says. “I want to bring something extra to the show that you wouldn’t get otherwise.”

Indeed, Family and Friends’ story is a wholly Athenian one. To take nothing away from MacDonald and his bandmates’ talents and drive, a similar chain of events could unfold in just a few years for a different wide-eyed UGA freshman with the courage to jump head-first into the local music scene. As MacDonald’s story illustrates, it just takes a willing spirit, a serving of talent and maybe a dash of self-training to fit in around these parts.

The hardest part is overcoming the intimidating feel that can come with being new to town and craving friendship with undeniably cool, creative types. If that’s your situation, MacDonald has some advice.

“Early college is kind of a scary time to do things on your own, but just put yourself out there and go to shows,” MacDonald says. “You don’t have to go with friends. If you can get friends together, all the better. You’ll see so many amazing shows you wouldn’t see otherwise and meet people who share the same values as you.”

With a little boldness, forming a band doesn’t have to be a pipe dream. If that willingness to abandon your comfort zone remains after a creative project takes shape, consider further following MacDonald’s lead and embracing change through collaboration. You might just end up with an album as vibrant and challenging as Felix Culpa.

Check out a list of Family and Friends’ favorite local albums here.