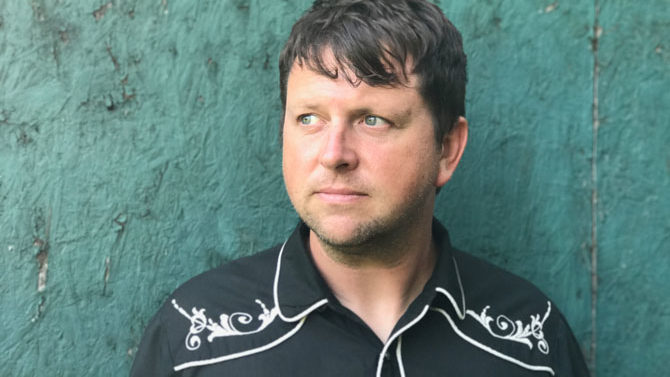 Mobile, AL-based singer, songwriter and painter Abe Partridge had a much different life a decade ago as an independent Baptist preacher. After a few post-ministry setbacks, a two-and-a-half year run of creative success has found him spreading a more secular message of hope. Sunday, he plays the 10th annual Classic City American Music Festival, an all-day gig at The Foundry also featuring Kevn Kinney of Drivin’ N Cryin’, Packway Handle Band and others.

Partridge’s journey from the pulpit to the recording studio began right out of high school. After attending four different Bible colleges in four years, he got married and started a family. At age 25, he moved to Kentucky to pastor a rural church.

“That’s where I found songwriting,” he says. “I was up in Kentucky in 2005. It was the rural Appalachian part of Kentucky. We got high-speed internet about the time that I was pastoring up there. It kind of coincided with me coming apart mentally. I got high-speed internet, and I found all of these songwriters like John Prine, Townes Van Zandt, Bob Dylan and all these guys. After discovering that, I started writing my own songs while I was there. It would just make me feel better. It’d give me a reason to get out of bed in the morning.”

As Partridge was discovering his folk and country inspirations, he spent Sundays hearing old-time hymns in a church that, in all likelihood, would never allow a praise and worship band to darken its doors. Still, any roots-music lover can get lost in those piano-driven songs about salvation, regardless of personal beliefs.

“The one thing I do miss is singing out of the red-back hymnal,” he says. “There was a certain spirit in those churches when you get the whole choir going, and people are singing in four parts. It’s a thing of beauty.”

Following a breakdown, in 2007 Partridge quit the ministry and moved back to Mobile. Despite his strong musical grounding and a still-secret talent as a painter, Partridge returned home with no marketable skills. Instead of attending college again or re-entering the ministry, he enlisted in the Air Force. Soon, he was deployed to Iraq.

Whether it was divine intervention or a case of talent rising to the top, things looked up fast once Partridge made it back to Alabama.

“When I came back in October 2015, I played a songwriter competition in Gulf Shores,” he says. “That’s the first time I’d played songs to people who weren’t my family. I ended up winning that night. There were a couple hundred people there, and I ended up getting a standing ovation. It blew my mind. Also that night, I met the guy that ended up producing both of my records.”

Since then, Partridge has toured consistently and cut two albums—2016’s White Trash Lipstick and this year’s Cotton Fields and Blood For Days. He’s also discovered that fans love his folk art so much that, in February alone, he sold over 20 pieces.

Like his earliest songs, Partridge’s art existed in a vacuum until his support team encouraged him to share his talent with others. Before that, he didn’t even know about Georgia’s best-known folk-art legend, Howard Finster.

“I lived in Calhoun for five years and never even heard of the guy,” Partridge says. “Now I’m dying to get up there just so I can see the Paradise Gardens.”

God-given talent and an avid interest in what works for other singer-songwriters drives Partridge’s prayer-come-true success. Prine’s dark humor and Van Zandt’s Earthly wisdom mark “Our Babies Will Never Grow Up to Be Astronauts,” “Ride Willie Ride” and other recent album tracks. These songs, and others like them, attract new congregations of fans to the work of an artist who has survived one hell of a quarter-life crisis.