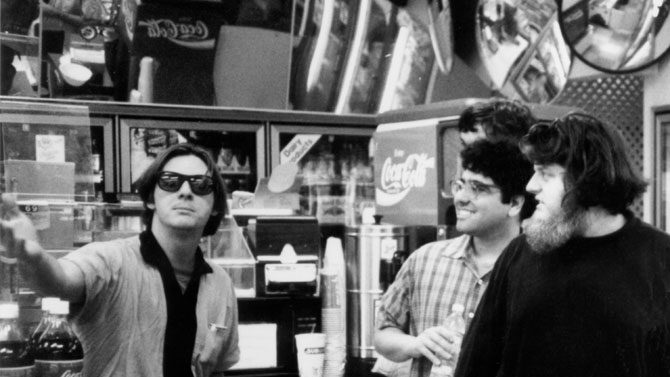 Whether you prefer fun in the sun or chillin’ in front of a fully cranked AC, summer demands a great soundtrack. To mark June’s imminent arrival, our heat-seeking music writers offered to recommend some of their favorite warm-weather jams. The result is a glorious grab bag of sounds, including frosty FM bops, hazy hip-hop bangers, sunny psych nuggets and sweaty Elephant 6 stank. Find a link to the playlist below, and stream along as you slip-’n’-slide into Athens’ sultriest season. [Gabe Vodicka]

“Where Are Ü Now” began its life as a demo for a generic Bieber piano ballad before Jack Ü got its hands on the track. The EDM super-duo of Diplo and Skrillex stretched and distorted Bieber’s vocals beyond recognition, creating a pop beat for the ages. Bieber’s lyrics aren’t too engaging, but the dolphin-like screech of the hook is a pure shot of dopamine. [Nathan Kerce]

The Fratellis: “Stand Up Tragedy”

You probably remember The Fratellis for a few chart-topping singles off their 2006 debut, Costello Music. The Scottish trio sounds nearly unrecognizable on its recently released fifth studio album, In Your Own Sweet Time, which features falsetto singing and a glossy electronic aesthetic. The new style is a mixed bag, but it really works on this bouncy summertime banger. [Howard Hardee]

“Hot Hot Hot” is a great, seven-minute, downtempo groove with a nice build to nowhere, “stay golden” refrain, buzzy guitar and backup singers. It feels like a long summer afternoon lounging in the yard with zero plans. [Marc Schultz]

Out of all the savory dream-pop nuggets on Wild Nothing’s 2010 debut, Gemini, few encapsulate the exhilaration of young love like “Summer Holiday.” Its peppy rhythm and saccharine “oooh”s highlight the song’s image of a couple made to stay in separate sleeping quarters meeting up in the middle of the night to “talk nonsense in [their] sleep.” Summer getaways with your significant other’s parents would never be the same. [Andy Barton]

Athens rapper Solo 10K’s new hit epitomizes the summer jam. The catchy beat gets you moving, and buried under the hook is a story. Throughout, the rapper plays to the specific Southern hip-hop sound that has become prevalent the last few summers. It’s a perfect song for the club, the barbecue, the road trip or around-the-house chores. [Jeremy Johnson]

After his attempts to turn into a full-on pop star were commercial failures, Future returned to his dark, codeine-tinged trap roots with DS2. The album’s second single is all about the value of loyalty and keeping fake friends out of your circle. Producer Metro Boomin provides a topsy-turvy beat with plinking pianos warped and looped into a hypnotizing rhythm. [NK]

David Byrne and company’s joyful paean to nature, dance-y and thoughtful, feels like you’ve joined a clothing-optional party in the middle of the rainforest with no beginning and no end. [MS]

Go Sailor: “Together Forever in Love”

The short-lived trio of Tiger Trap’s Rose Melberg, Crimpshrine’s Paul Curran and the Aislers Set’s Amy Linton made the musical equivalent of summery sunshine. This sincere slice of mid-’90s twee-pop kicks the summertime blues as sure-handedly as the trio transitions to the song’s bridge. [Bobby Moore]

While every song on Are You Sleepy? could rightly be considered a perfect sticky, summery indie song, the album’s opener is what I immediately think of when school’s out. Nostalgic, fuzzy and bright, Scott Spillane’s lyrics fade in and out of darker imagery that’s hard to shake, like spring’s pollen allergies. [Frances Newton]

Bouncy, bountiful and a little bit wistful, “Nobody Cares” is a fun soundtrack for mixing up a pitcher of summer drinks—or a bag of party joints—ahead of your next summer-casual gathering with old friends. [MS]

Guy Clark: “A Nickel For the Fiddler”

Summer’s a great time to rewind back to the ’70s—the other time when hippies, folkies and ornery Texans saw fit to save country music. Guy Clark filled a whole city park with such characters and a few old-timers for this underrated cut off his debut album, Old No. 1. [BM]

One of the strongest tracks of Dinosaur Jr.’s reunion era, “Over It” is a sunny song about painfully overthinking a relationship. The lyrics aren’t particularly positive, but the instrumentals have a warm vibe that just feels right for soundtracking a day at the beach. The video, which features the band skating and biking at various locations across the Southeast, is perhaps the most jolly thing Dinosaur Jr. has ever been a part of. [NK]

Souls of Mischief: “93 ’til Infinity”

As soon the siren-like synth starts sounding, you’ve been mesmerized. Add in a smooth jazzy backdrop, intelligent bars and boom-bap percussion, and Souls of Mischief have created the perfect track to chill to. Initially invading the airwaves back in (you guessed it) 1993, it still soundtracks blunt-inspired summers 25 years later. So, heed Tajai, Opio and A-Plus’ excellent advice: Take that “40, swig it/ You know it’s frigid” while you pump this song—and playlist—all summer long. [Hadrien Turner]