These Talented Teens Will Play the Twilight Kids’ Stage Saturday 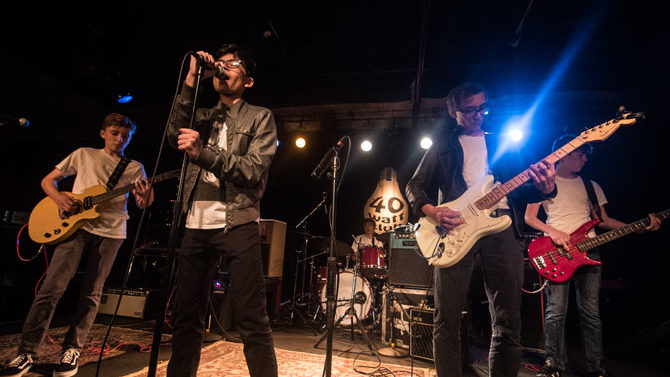 Thanks largely to organizations like Nuçi’s Space, which hosts its Camp Amped summer and after-school programs throughout the year, and Girls Rock Athens, whose Girls Rock Camp caters to aspiring young female performers, the talented teenagers (and preteens!) of Athens have been well-represented on local stages lately. On Saturday, three such groups will rock the Twilight Kids’ Stage in front of City Hall, with performers from Camp Amped’s spring session closing out the afternoon. Here’s a closer look at the artists on the lineup.

Connor Byers wrote his first song at the tender age of 8 and has been performing and writing music ever since. Since that first song, he has explored a wide array of styles. Whether it be rap or rock, Byers hasn’t shied away from much of anything. “I think my music is a big blend of genres,” Byers says.

Although Byers says it is often a struggle to balance being a high-school student with being a musician, he explains that his biggest obstacle has been as an independent artist in general. Like many of his peers, Byers isn’t signed to a record label and is operating purely of his own volition. While that offers him more independence, it’s also taught him the importance of the less-glamorous PR and business side of the music industry.

“It’s certainly challenging. There’s a lot more freedom than if I was on a label, and I get to make all the decisions myself,” Byers says. “But it’s a lot more work, as well.”

Byers is currently working on releasing his second full-length album, which he says will be his “biggest” and “most personal project” yet.

The Drapes were originally a ’50s cover band that started jamming together during a July 2016 session of Camp Amped. They’ve since ditched the throwback sound and have begun dabbling in writing original songs. “After playing the same four songs over and over again, we got tired of doing covers. So, I think at one point, we were just like, ‘OK, we need to get it together and just start writing originals,’” says guitarist Dominic Bielli.

Part of that desire came from a wake-up call in which band members realized they weren’t being productive during practices. They were all very close and comfortable with each other, which was great for their chemistry, but not so much when it came to buckling down to work. “We would go practice at Dominic’s house and then, 15 minutes later, we’d end up at the park across the street from his house,” says lead singer Sachio Goodie.

So, the band began to rehearse at Nuçi’s Space to become more productive. “We were like, ‘All right, we’re paying for this practice space, so we should use our time wisely,’” Bielli says.

Basil had its genesis at a June 2017 session of Camp Amped. However, its members weren’t originally placed in a group together. Rather, they began playing simply as a result of liking each other’s company. “It was really organic. [We] just stumbled into each other at the end of the Camp Amped finale and we were like, ‘Hey, let’s make music together,’” says guitarist Everett Vereen. “We got a show offer from Nuclear Tourism, and that’s kind of what made us start practicing, because we had the goal of a gig.”

After that first show, they kept playing for the same reason they started: because they all liked each other and wanted to have some fun. “I think that’s the whole point of having a band. We do it because we’re musicians and we want to have fun,” says drummer Jordan Rhym.

The band likes to explore a wide variety of sounds, with the goal of being as quirky and experimental as possible. “The process is, ‘Hmm, this would be weird, let’s do it,’” Vereen says.

Although members Dhruv Prakash and Rhym will graduate soon, Basil still has plans to jam together whenever it gets the chance—it just might not be onstage. “We’re the least structured band,” Rhym says. Responds Prakash, “It’s a weird dynamic, but it works for us.”