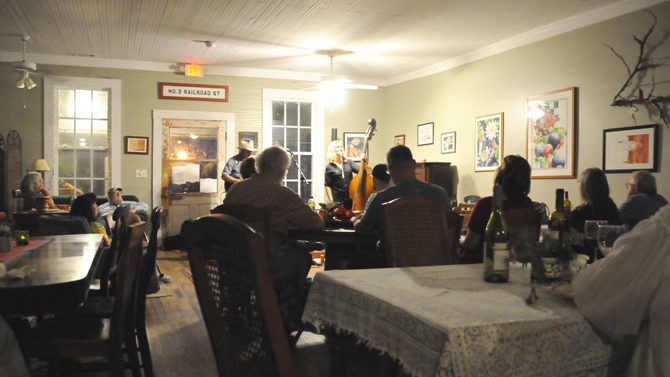 Mary Nouri and Rita Morgan Richardson have a few things in common. They both spent part or all of their lives in Arnoldsville. They both have fond memories of the general store off of Railroad Street. And they’ve both spent a majority of the past few years trying to take an abandoned, run-down building and restore it to its former glory. The only difference is that Nouri’s building happens to be that same general store on the corner of Railroad Street, while Richardson’s is a chapel in Tuscany, Italy.

Richardson and Nouri met when Richardson contacted Nouri in January after discovering that Nouri had renovated and re-opened the old general store as No. 3 Railroad Street, a community center and music venue that began hosting events in 2013.

“My dad grew up in Arnoldsville, so when I was growing up, that’s where I went to visit my grandparents,” Richardson says. “As a little girl, I used to think it was a big deal to walk to the general store from their house and buy a sweating, ice-cold Coca-Cola with ice cream.”

The building was in complete disrepair at the time of purchase, but Nouri, who was retired, resolved that rebuilding No. 3 Railroad Street was how she would spend her time and energy, since she didn’t have children or grandchildren. “Instead of sending kids to college, I did this,” Nouri says.

The two women added each other to their newsletters, which is how Nouri learned about Richardson’s campaign to save the San Filippino Chapel in Tuscany. Nouri emailed Richardson to express an interest in hosting a fundraiser for the project. The two began to plan the event together, and on Feb. 17, when Nouri re-opened the venue’s doors after taking a hiatus due to a parking dispute with her neighbors, Richardson got the opportunity to visit No. 3 Railroad Street for the first time since she was a little girl.

“What I liked about it was she kept as much of the original as possible. It’s that smell of the wood [that] I remember from my childhood, and it still has a trace of that,” says Richardson.

That homey feel was something Nouri knew she wanted to maintain when she began rebuilding the space in late 2012. The building feels less like a music venue than an intimate gathering space. With its mismatched furniture and original art, Nouri wanted to maintain the communal feeling of the general store. She wanted the room to emanate a welcomeness to anyone who came in. “That’s the real thing we try to be about, is community. We’ve sort of developed a community,” Nouri says.

Nouri didn’t initially intend No. 3 Railroad Street to host concerts, planning to open a coffee shop or restaurant instead. However, the building couldn’t meet all the requirements set by the county health department. Nouri knew she still wanted a space for people to gather, so she began providing yoga and art classes, as well as bringing in different singers to perform. “We sort of joke that we’re like a club,” says Nouri. “It’s been great meeting so many people and hearing music I’ve never heard.”

One such artist is Jon Byrd, who will perform at the venue on Saturday. “I’m from a little Alabama town, so I like these little towns no one’s ever heard of. Real people actually live there,” Byrd says. “What excites me is just that. It’s going to be a listening room of people there to hear good music. I’ll get inside any group like that.”

Byrd, along with Paul Niehaus, will perform as part of an event dubbed “Musical Aperitivo.” All proceeds will go to help raise money for the San Filippino Chapel with the hope of restoring it, the same way Nouri did with No. 3 Railroad Street.

“This project, this fundraiser, this whole thing—this whole serendipitous thing—seems real spiritual and good,” Richardson says. “We need to focus on positive things and doing good for the sake of doing good.”