With a Heretical Slant, Jim White Explores the Human Condition 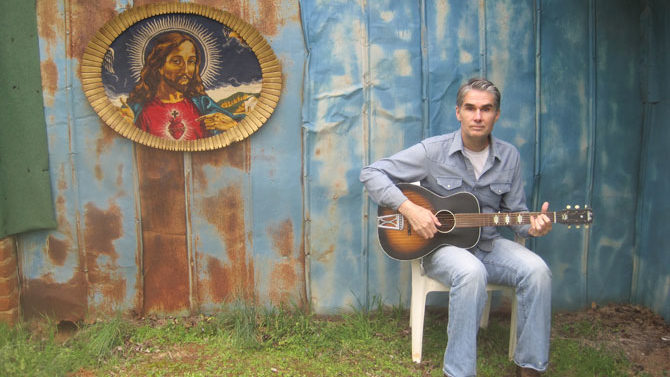 For his first Athens-area show since the stateside release of his new solo album, Waffles, Triangles & Jesus, in February, alt-country singer-songwriter Jim White needed the right venue. Famed rock journalist and biographer Sylvie Simmons is his opening act, and she plays gentle, acoustic songs that don’t suit the sound or setting of the average downtown Athens dive. “She sings real quiet, plays ukulele and writes very beautiful songs in a Leonard Cohen slant,” White says. “It wouldn’t seem right putting us in a bar.”

White presented this conundrum to his Facebook friends, with their advice pointing him to the historic Beth Salem Presbyterian Church in nearby Lexington. Founded in 1785 and in its current location since 1827, the church became the property of Oglethorpe County after its final three members voted to disband in 2015.

“I’m kind of known for my heretical ideas, so it’ll be interesting to see if I don’t get struck by lightning while I’m singing my songs,” says White, the artist behind such metaphysical album titles as Wrong-Eyed Jesus.

Jokes aside, even left-of-center roots music derives from the church. The hymnal set the sound for folk, bluegrass, country and other influences heard on White’s records. Gospel sermons informed the social norms and spiritual ideas often embraced or challenged in modern folk music. Through that lens, even the most unorthodox musical statements in his repertoire are at home at a place like Beth Salem.

Plus, it’s only a church in building design and historic relevance at this point. According to Lexington Downtown Development Authority co-founder Linda Parish, the city received an anonymous donation to purchase the property after the church ceased operation. Since then, the space has hosted Christmas events and secular functions, including concerts.

An intimate setting that comfortably fits no more than 150 people, the church offers both the solemn silence and folk-friendly acoustics needed to accentuate White and Simmons’ music. “Every musical group that comes there talks about how great the acoustics are,” Parish says.

Friday’s show is one in a series of events designed to raise funds to match a Georgia Council for the Arts preservation grant. Parish adds that the church will eventually be rented out by the city for weddings, concerts and other events, creating a possible revenue stream for future preservation efforts.

For White, networking to find the right fit for a creative need extends beyond the historic church preservation scene. Upon moving to Athens from his hometown of Pensacola, FL in the aftermath of 2004’s Hurricane Ivan, White only really knew the late Vic Chesnutt. After over a decade of making art and music here, he can call on local friends ranging from the Hog-Eyed Man bluegrass pickers to garage legend Holly Golightly to add their creative wrinkles to his recordings. These regular collaborations allow for a seemingly boundless take on alt-country, making it hard to pin down White’s sound.

While much of White’s critically acclaimed material teeters on the edge of madness by examining the human condition’s most vicious downswings, he sneaks in some absurd, comedic songs, too. “Playing Guitars” exemplifies the latter on the new album. It’s simplistic, loose and fun, like something John Hartford might’ve performed in the early days of hippie-inspired newgrass.

Yet this tongue-in-cheek approach isn’t inspired by Hartford, John Prine or any other cosmopolitan folk icons. Instead, White credits an unlikely source in countrified comedian and sanctified Christian Ray Stevens.

“I grew up in the Deep South listening to AM radio, and when the gimmick songs came on, Ray Stevens always got my attention,” he says. “I loved how he built a story and got people laughing. If I don’t put those song on there, my records would be quite somber and dark. I don’t want to be on that journey, where there’s never any redemption.”

No one’s ever been struck by lightning while seeking redemption, so White should be safe. Plus, he’s not there to proselytize, so a little light-heartedness might go a long way. Instead, he wants listeners to feel welcome on their pew, especially if they also check the thunderstorm forecast before darkening the doors of a church.

“People who come up to me the most often are preachers’ kids who say they were raised in the Assembly of God church and they never fit in,” White says. “They were always wondering and always had creative impulses. They say, ‘Thank you for that music that kind of describes that struggle.’ You feel great about it, knowing you helped somebody—particularly marginalized people like that.

“It’s tough when you leave the church, and your family—be it your family-family or your church family—look at you with this incredible sadness in their eyes,” he says. “They think you’re going to burn in hell. Then you got to go look for your other family, which is people like me.”