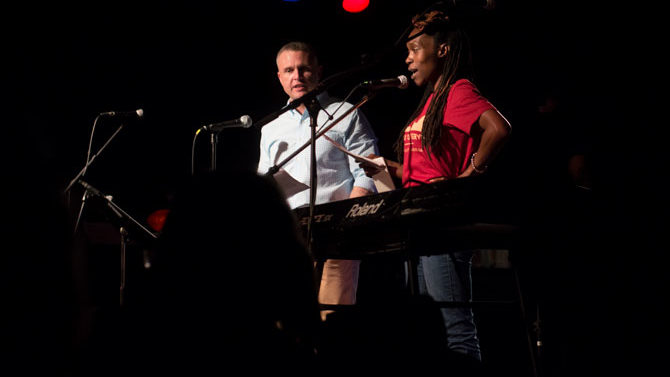 Pat Priest can pinpoint the exact moment when she knew she wanted to put on the first Athens in Harmony concert. It was in July 2016, at a City Hall vigil following the the Dallas police killings, where Priest observed an interaction between Athens-Clarke County Police Chief Scott Freeman and Mokah Johnson, leader of the Athens Anti-Discrimination Movement (AADM).

“I went to that rally and saw them walking around each other very awkwardly,” Priest says. “I thought, ‘Gosh, we really do need to know each other.’”

Until then, the concept for Athens in Harmony was always tugging at the back of Priest’s mind. She knew she wanted to coordinate an event that would pair black and white performers, but she had never found the time to do it. However, watching Freeman and Johnson and sensing a general atmosphere of disconnectedness, Priest felt a sense of urgency to create a community event that would bring everyone together.

That October, Priest and Johnson presented the first Athens in Harmony concert, for which they randomly paired artists of different races. They challenged the musicians to step out of their comfort zones and perform a duet together.

“At first, I wasn’t sure how this was going to work,” Priest says. To her relief, she says, “[w]e had such a good time. People stood around and did not leave. There was some sense that something magical had happened.”

Three months later, they decided to host another concert, where most of the duos from the previous concert returned to perform. Soon after, Priest and Johnson decided to make Athens in Harmony an annual event.

This year’s concert, part of a series of MLK Day events, will feature a new group of pairings, but a few familiar activities throughout. Concertgoers can also expect to see a special performance by Knowa Johnson and Neal Priest, the organizers’ husbands.

Priest also plans to stay true to previous concerts by ending the show with a group rendition of John Lennon’s “Give Peace a Chance.” Additionally, Priest says some of the acts will speak about instances of racism they have experienced, as was the case last year.

Although this is only the third Athens in Harmony, participants say it’s already starting to work. “I feel like we’re in the place we’re in because there’s not enough understanding,” says hip-hop artist Ishmael “Ishues” Cuthbertson. “I hope that [the concert] can bring about a heightened level of understanding. I think this is a good way to usher that in from a musical standpoint.”

At Sunday’s show at The Foundry, Cuthbertson will be paired with jazz drummer Seth Hendershot. Although the two artists come from different genres, Cuthbertson says he’s looking forward to challenging himself as an artist. Regardless of their backgrounds, Cuthbertson is excited to simply get the opportunity to collaborate with a fellow musician.

“Hip hop is what I do. Rap is my genre,” Cuthbertson says. “But I’m an artist, at the end of the day. Just getting together with other artistic minds to create different forms of art is always a goal.”

While the artists walk into Athens in Harmony with a goal of expanding themselves musically, many also leave with something much more valuable. True to the theme of connectivity, previous performers have become close friends. The 2017 pairing between SJ Ursrey and Andreana Williams is one such case. Williams even performed at Ursrey’s 40th birthday party.

“She showed up in a fabulous outfit and sang me a song,” Ursrey says. “It [the concert] definitely brought the community together. I did not expect the payoff. I thought I was going to be challenged. I didn’t know I would have a new family.”

That sense of community is the ultimate goal of Athens in Harmony. Although one main point is to raise funds and visibility for the AADM and help eradicate discrimination in the Athens area, the concert is also about local folks coming together. It’s about helping us understand one another and working towards creating a more unified community for all races, genders, religions and ethnicities.

“I feel like the authenticity of the separate communities forming [one] community radiated out and can’t help but do good,” Ursrey says. “I don’t think there’s right or wrong. I think there’s connected and disconnected, and what that show does is connect people.”

In addition to the Athens in Harmony concert, the Athens-Anti Discrimination Movement and United Group of Artists will present the second annual MLK Jr. Day Parade and Festival on the holiday itself, Monday, Jan. 15, at 3 p.m. After the parade, the festival, at various venues in the historically significant Hot Corner district downtown, features live music, an honoree ceremony, food vendors, guest speakers, family activities and more. See The Calendar for more info. [Gabe Vodicka]