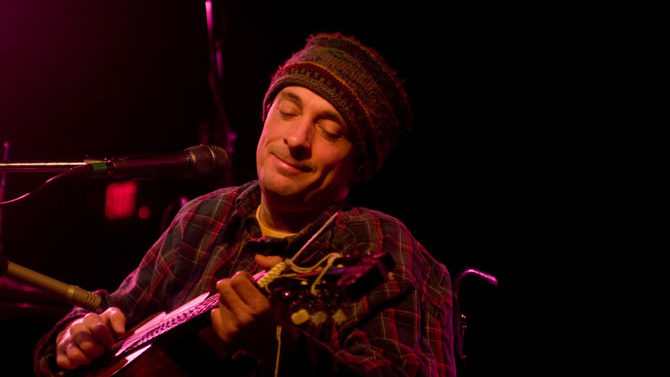 There’s been an influx of interest this year in Athens music legend Vic Chesnutt, signaled by a pair of upcoming local events and a local label’s ongoing vinyl reissue campaign.

The folk-rock singer-songwriter and guitarist ascended from playing downtown clubs in the 1980s to earning critical acclaim and maintaining an international profile from the mid-’90s until his death in 2009. Along the way, he influenced others who would become local success stories.

Among the Athens bands elevated by Chesnutt was Elf Power, which collaborated with him on the 2008 album Dark Developments. “I think it’s great that Vic’s music is still being celebrated,” says Elf Power frontman Andrew Rieger. “He’s such a legendary songwriter—the best to ever come out of Athens, in my opinion—so I’m glad that other people recognize that… The collaborative album that we recorded together and the subsequent few years spent touring the world together are definitely among the high points of my musical career.”

Many of Chesnutt’s contemporaries and artists he inspired will celebrate his life and legacy at the Songs of Vic Chesnutt event, happening this weekend at the 40 Watt Club. Former Star Room Boys frontman Dave Marr helped organize the two-night concert along with the venue’s talent buyer, Velena Vego. Marr says around 40 artists will perform in total, including Five Eight, Thayer Sarrano, the Pylon Reenactment Society, Bain Mattox and T. Hardy Morris. Proceeds will go to Nuçi’s Space, which promotes mental-health awareness for local musicians.

The springtime celebration continues Thursday, May 11 at The Foundry with the unveiling of the winner of the first Vic Chesnutt Songwriter of the Year Award. The Classic City Rotary Club founded the award, with support from Chesnutt’s family, to recognize talented songwriters in the Athens area. (The public nomination period closed Apr. 7, and a panel of local music-industry judges are currently deliberating.) In addition to bragging rights, the winner will take home a $1,000 cash prize. Proceeds from the Foundry show will also benefit Nuçi’s Space, along with supporting the Rotary’s various service projects.

Asking around town for stories about Chesnutt, it’s clear that his peers are as likely to share something hilarious as they are to rightly praise him as a songwriter and performer—a trend that will hopefully be reflected in the stage banter at the 40 Watt. “His dark and nasty sense of humor was something that I reflect back on fondly,” Rieger says.

“At soundchecks, when checking his vocal mic, he would improvise the nastiest, most hilarious songs, a summary of which would not be fit to print in your publication,” Rieger adds. “He did this for our amusement, and I greatly appreciated it, as it was a welcome break from the stresses of touring and traveling.”

Such tales extend well beyond state lines. Texas-based folk and country singer Ray Wylie Hubbard remembers Chesnutt as a kindred spirit, beyond musical similarities. “We kind of hit it off because we were both backstage being snarky,” Hubbard says. “He was such a great, great writer. I have a lot of respect for him, and we loved just sitting back and having fun.”

The third commemoration of Chesnutt’s music happening this year is a reissue campaign. Athens-based New West Records is focusing on several releases from Chesnutt’s time with California label Texas Hotel. They’ve already unveiled colored vinyl represses of Chesnutt’s Michael Stipe-produced 1990 debut, Little, as well as 1993’s Drunk and 1995’s Is the Actor Happy?, and the 1991 landmark West of Rome is getting a limited double-LP release for Record Store Day on Apr. 22. In addition, a couple of albums originally issued by New West, 2003’s Silver Lake and 2005’s Ghetto Bells, are slated for release in May and June, respectively.

From local events to far-reaching reissues, 2017 is shaping up to be a banner year for Chesnutt’s legacy. It comes at a seemingly odd time, unattached to any noteworthy anniversaries of the late artist’s milestones. But based on the enthusiasm among event planners, as well as loved ones’ hilariously vulgar memories, those in Chesnutt’s still-relevant sphere of influence don’t need to look to their calendars for a reason to laugh, cry or celebrate in his name.