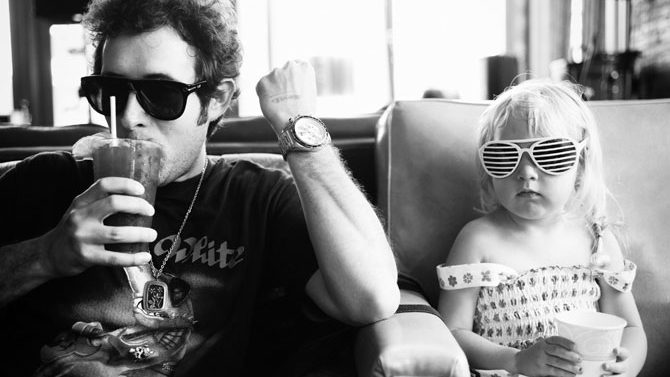 During his decade with Atlanta garage-punks Black Lips, and his time collaborating with Athens’ T. Hardy Morris in Diamond Rugs, Ian St. Pé gave audiences what they wanted on an international scale. Now he’s living in Nashville and plotting a return to the spotlight with a solo project, known simply as Saint Pé.

Saint Pé has slowly taken shape since before its namesake parted ways with Black Lips in 2014. Back then, St. Pé was planning a side project called Fixed Focus, a name he used instead as the title of his band’s debut album, issued Apr. 7 by Ernest Jenning Record Co. The album was recorded in 2015 with friends from Georgia, including current Nashville resident Ian MacDonald (ex-Turf War). Last year was spent putting the remaining pieces in place—a record deal, a booking agent and a new backing band featuring performers from Nashville and Chicago.

The long build toward Fixed Focus kept St. Pé off the road after a decade of constant touring. The plus side was ample time to further polish his songwriting and recording skills. But for a seasoned entertainer, those positives cannot replace the roar of a crowd.

“I have a studio at my house now, and I do enjoy sitting at home and recording,” he says. “Also, I have a publishing company, [Rough Trade], so my songs have already gotten in TV shows like ‘Billions,’ which I think is on Showtime, and ‘Sex&Drugs&Rock&Roll.’ I do like the publishing side of things. Being in Nashville is a good spot to do that. But man, I play rock and roll music. That’s called ‘get up, get out, and get some.’ My life is good, but I’m ready to get back on the road.”

Now St. Pé is back on tour—older, wiser and more sober. Despite his former band’s hard-partying reputation, now “I don’t really partake in alcohol or drugs,” he says. “I’ll tell you, that happened near the end of my Black Lips career. I enjoyed it, because you spend so much time getting loaded that when you get on stage and you’re fucked up, it’s fun. But then it becomes normal, so now when I play sober, that’s like being fucked up. It’s wild, man. I see colors I’ve never seen before, and I feel the souls of the 300 kids just hitting me harder. I’ll tell you what, being sober is the new fucked up.”

St. Pé says his current supporting cast has the musical licks and intestinal fortitude to power through upcoming tours—limited to a week or two each because of service-industry jobs—in hopes of earning the fiscal success that could make Saint Pé a full-time career.

“Playing music is a lot more than the notes you hit,” he says. “It’s the dead space in between the notes—but it also entails being able to get up every day and get into a van and go somewhere. There’s a lot more to music than playing. Rock and roll is what happens the 23 hours in between shows. Can you do it? A lot of people can’t. I like living out of a suitcase and touring the world, but it’s not for everybody.”

As for the new album, there’s some history in its making that has more to do with the Grand Ole Opry House than Die Slaughterhaus. St. Pé and his wife own a log-cabin home that was originally built for Roy Acuff.

“He lived here from 1945–1950, so when he discovered Hank Williams in 1946, he was living here,” St. Pé says. “That right there alone is huge in my book. I recorded the record in the room Roy used to record his radio show in, and my control room is Roy Acuff’s office.”

St. Pé knows how to excite audiences in different cities, after going from playing intimate venues in his early days with Black Lips to touring the globe. That’s why he’s willing to sprinkle beloved songs by past bands into his current live sets—even teasing a possible Athens-only Diamond Rugs reunion with Morris on Apr. 13 at the Caledonia Lounge. Don’t miss out.