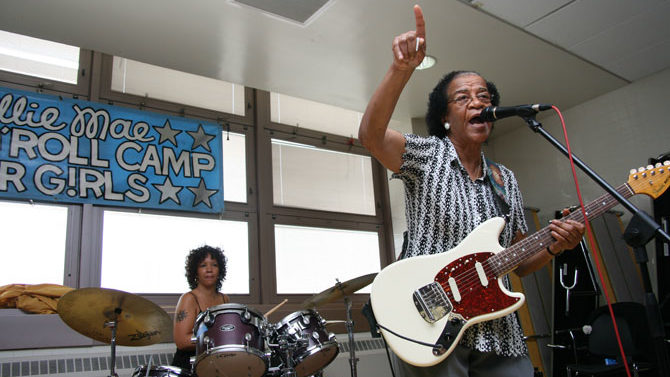 Musicians who practice their craft for years on end, long after fleeting flirtations with mainstream acceptance cease, are championed by fans as “lifers.” Blues players are among the easiest lifers to romanticize—especially those who escape rural Southern life and go on to perform on influential recordings. At 77, Atlanta’s Beverly “Guitar” Watkins continues on that journey, and shows no indications of slowing down.

Watkins grew up in Commerce, where she shared her early love of music with her banjo-picking grandfather and harmonica-playing father. By her teenage years, she was traveling to small Georgia towns with her first band, Billy Westbone and the Downbeat Combo.

Before that group called it quits, future bandmate and drummer Bobby Lee Tuggle heard her rehearsing, and felt she’d be a good fit for a new band being formed by established blues musician Piano Red. Born Willie Lee Perryman, Piano Red popularized the term “rock and roll” in Atlanta with 1950’s “Rockin’ With Red.” “[Piano Red] was already famous from back in the ’40s, because he was on Okeh Records with Curley Weaver and Blind Willie McTell,” Watkins says.

Popular music’s shift from piano-based, boogie-woogie blues to rock and roll led to Piano Red forming a five-piece backing band, initially called the Meter-Tones. Despite their leader’s past success, the group had humble beginnings, its members packing themselves like sardines into Piano Red’s 1952 Ford so they could play fraternity houses across Georgia. “We had to put our amps in the trunk, and we had to put the drums on top of the car,” Watkins says.

During those early years, Watkins was still in high school. “We were all young, and Piano Red was like our father,” she says. “He taught us very well about how to meet the public and stage presence. When we walked out on stage, we got a standing ovation.”

Watkins describes Piano Red as a prototypical 1950s father figure, practicing tough love when he wasn’t instilling manners. In the process, he taught his young bandmates lessons that likely enriched and lengthened their careers.

“I am proud that I did get a chance to play with him, because he taught me so much about things that are happening with me now,” Watkins says. “He taught us we couldn’t be late. The first and second time, he’d warn us, but by the third time that was it.”

Piano Red’s 1961 return to Okeh found him adopting Dr. Feelgood as his stage name, with his band at the time rechristened the Interns. Although the 1962 single “Dr. Feelgood” remains among the late musician’s signature songs, its B-side, “Mr. Moonlight,” struck a nerve with blues-crazed British lads. Penned by Interns member Roy Lee Johnson, the song was covered two years later by both the Hollies and the Beatles.

Despite international touring opportunities, Dr. Feelgood and the Interns failed to secure mainstream footing. A lack of widespread notoriety beyond blues enthusiasts did not deter Watkins, who remained a staple of Atlanta blues clubs. “I never stopped playing,” she says. “I played on the weekends, and during the week I cleaned houses and offices.” Watkins’ post-Interns gigs included side work in bands, and solo shows with her vintage Fender and a drum machine.

Although she’s still affiliated with Duffy’s foundation, Watkins is more of a self-promoter now, made possible in part by a blistering show schedule. Aside from regular appearances at blues clubs, she lists a nursing home, three different churches and Hartsfield-Jackson Atlanta International Airport as regular performance spots. Renewed interest in Georgia’s rich history of African-American recording artists and the ease of transmitting information online help her DIY cause, as well.

Local producer and musician Rick Fowler and his band will back Watkins Friday at The Foundry. Fowler says the show will be filmed by a three-camera crew and recorded multi-track for a potential documentary and live album. If the documentary comes to pass, Fowler will not lack interview material. Watkins tells vivid stories of her career, transitioning between thoughts with, “and we rocked on.”

Nor will Fowler’s film suffer from a lack of vibrant performance footage. Watkins still owns the stage as a septuagenarian, switching effortlessly as a singer and musician from tender soul and gospel music to raucous blues and rock and roll. And few guitarists of any age can get a crowd as riled up with a little behind-the-back shredding.

And if the film takes a few years to complete, there’s no need to think that Watkins won’t still be rocking on, ready to play its release party.