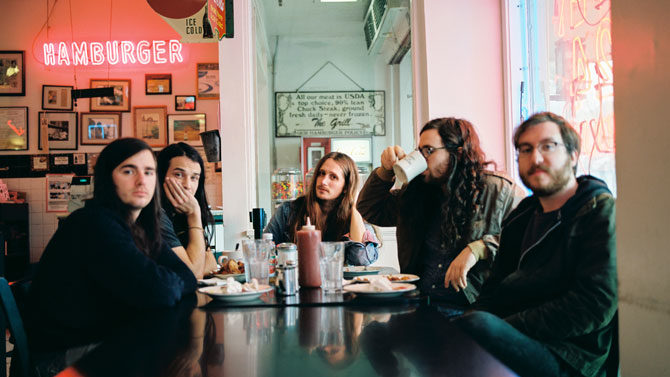 The adage “never judge a book by its cover” rings especially true in journalism, but in the music industry, where appearances are as essential to an artist’s brand as the music, putting aside expectations can be difficult. It comes as a surprise, then, when Andy Shepard starts to recount, with barely a trace of a Southern accent, the origin story of Roadkill Ghost Choir, the band he started in the small town of DeLand, FL with his two brothers, Max and Zach.

“I was doing music mostly just by myself in my room, recording stuff and throwing it online,” he says, before he was approached by a local promoter to play a show. It took little work recruiting Max to play drums and Zach bass, but fleshing out the rest of the lineup posed some trouble. “I was looking for a pedal steel player, and it’s almost impossible to find someone that’s in their 20s, especially where I’m from,” Shepard says.

But the brothers struck gold at their father’s DeLand studio, North Avenue, where local musician Kiffy Myers was interning. “So he kind of waltzes in,” Shepard says of Myers, “and we all like the same kind of music. It was kind of like this serendipitous moment of, ‘Hey, let’s make some music together.’” They continued playing shows together, picking up guitarist Stephen Garza along the way, before recording and releasing the Quiet Light EP in 2012.

By 2014, the band had recorded and released its debut full-length, In Tongues, to much fanfare. They moved to Athens and toured extensively on the record, performing at Lollapalooza, Bonnaroo, Governor’s Ball and on “Late Night with David Letterman”—all signs of a band well on its way.

Behind the press accolades and festival gigs, however, was an undercurrent of pressure stemming from the band’s management and de facto label at the time, M-Theory. “We did the EP, and then pretty much after that we toured nonstop,” says Shepard. “I can’t write for shit while on the road, so we would have no time off at home where I could settle in and really just work stuff out. I only had maybe three finished songs when they were like, ‘Hey, we want you in the studio. We’re gonna book time in three or four months.’

“That freaked me out, because this was our first full-length record,” Shepard continues, “and they weren’t going to give me any time to really dig into the songs and make sure everything was exactly where we wanted it.”

Despite those frustrations, the band eased back into life in the Classic City, where Shepard outfitted his own recording space and started work on a new Roadkill Ghost Choir album. He began demoing False Youth Etcetera in early 2015 at a more relaxed pace, tracking parts on his own before sharing with the band.

The group then headed back home to DeLand to record at North Avenue, spending nearly a month expounding on those initial demos and fine-tuning each song. In addition to its bread-and-butter roots-rock, False Youth offers an expanded palette of synthesizers and keyboards.

“I was listening to a lot of Bruce Springsteen when I was writing the record, and I loved those ’80s kind of synths: thick pads [and] big, goofy leads,” says Shepard. In a similar vein, he was hoping to inject Roadkill’s heavy subject matter with a little bit of rafter-reaching pep. “It kind of got old playing shows where you look out and you realize that no one fuckin’ moves,” he says with a laugh.

The band now had the record it wanted to make under its belt, and all it had to do now was release it. But that would be too easy. Contractual issues with M-Theory reared their ugly head, prompting yet another wave of tense relations that left the band fighting for the rights to its own material.

“It was just this hell of lawyers emailing each other back and forth, and it would take about two weeks to get a response to some stupid question,” says Shepard. “So we were just sitting, waiting, not really knowing if we were going to get the record back at all, which was completely depressing.”

Cooler heads and lawyer jargon finally prevailed, and the band won back its songs, which it will share as two separate volumes digitally before releasing the whole thing on CD and vinyl this spring. As for what Roadkill will do next now that it’s virtually a free agent, Shepard is inclined to simply enjoy the moment and take it easy.

“I’m working on a whole bunch of stuff right now,” he says. “I don’t know what it’s for or what’s going to happen with it, but I’m still kind of dipping my toes into that slowly. I’m gonna kind of go slower and just figure it out.”