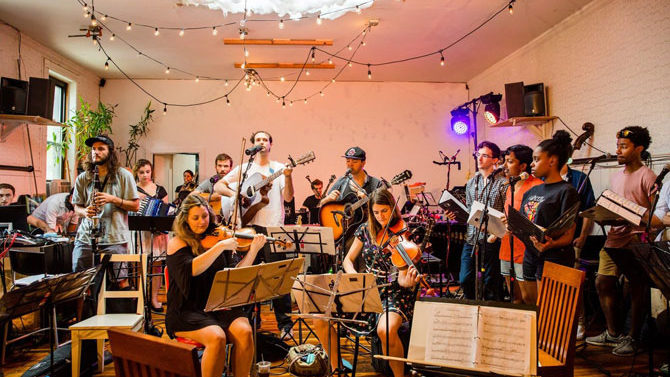 Caught by phone one recent Saturday, Evan Tyor is eating a late breakfast and getting re-acclimated to life in the Big Apple. “[I’m] honestly just sort of coming back down to Earth from our trip to Georgia,” says the former Athenian in between bites. “We all got back and sort of got back into our regularly scheduled lives, and it’s a little bit of a comedown.” Tyor, who moved to New York roughly three years ago, recently ventured back South to film and record several musical performances for a series he and a slew of others release under the name Apartment Sessions.

Tyor has continued to push the bounds of the audio-visual project over the years, leaning on friends and collaborators to help with the organizational and technical aspects required to corral an ever-growing group of musicians. The creative undertaking has moved from the tight confines of a New York City apartment building to the vast, scenic reaches of transatlantic countrysides, garnering nearly 30,000 YouTube subscribers in the process, but it was time back in the Peach State that reaffirmed the project’s underlying focus: community.

In 2016, Tyor reconnected with an old friend, Luke McGinnis, who became his roommate upon relocating to Brooklyn, and the two began collaborating musically almost immediately. A week after playing a gig together in the city, McGinnis invited over many of the other musicians involved to their apartment to play an arrangement of a song for fun, setting up a video camera to capture the room’s magic.

The duo got a few more sessions under their belt, but it didn’t take long for Tyor and McGinnis, with collaborators Drew Krasner and Liz Maney, to start experimenting with recording outside of their apartment, taking their gear and crew on the road to film on location in Pennsylvania and Nashville, TN. “While maintaining our musical integrity, we also tried to expand what these sessions could do, to try and innovate and bring more people in,” Tyor says.

After nearly two years of building upon their initial concept, the group began crowdfunding for its largest undertaking to date: a trip overseas to Iceland involving almost 40 musicians and crew members.

The large group set out in the fall of 2018 and recorded a treasure trove of material over 10 days. The ensemble took on The Decemberists’ “The Crane Wife 3” in a room graciously larger than a Brooklyn walk-up, covered the Dirty Projectors-Bjork collaboration “On and Ever Onward” with a small waterfall as backdrop, and scaled things back down for The Mountain Goats’ “The Mess Inside.”

“We also had a lot of help, of course,” says Tyor, acknowledging the efforts of a now vast public body. “That’s been so consistent for all of it. The whole project is a community project, really. Everybody donates their time.”

As the group has grown and democratized, Tyor has begun to imagine where the project can go from here—or rather, what more can it do. During the group’s travels between Athens and Atlanta in September, they recorded five sessions here in the Classic City, in addition to a few unplanned interludes. Among those were a cut from singer-songwriter LeeAnn Peppers’ new album, a session with violinist and pop songsmith Kishi Bashi at his home, and a medley of tunes at Taylor Chicoine’s Pity Party, a house show venue with a like-minded propensity for filming live performances of local bands.

But it was a stop between cities, at the Stewart Detention Center in South Georgia, that provided Tyor with one of those “what more” moments. The center, whose population eclipses that of the nearby town of Lumpkin, holds immigrants awaiting trial for deportation. Tyor and company viewed the facility and toured a community center, El Refugio, that provides legal advice and shelter for visiting relatives. The center served as a setting for a session.

“[It] sort of revitalized everyone, making us sort of focused on how privileged we are to get to do what we do, and maybe where there is value in doing what we do,” says Tyor. “It’s a good question we ask ourselves all the time: Why are we doing this?”

Moving forward, with plans to apply for nonprofit status and funding grants, the Apartment Sessions players are well on their way to determining just what they can achieve.