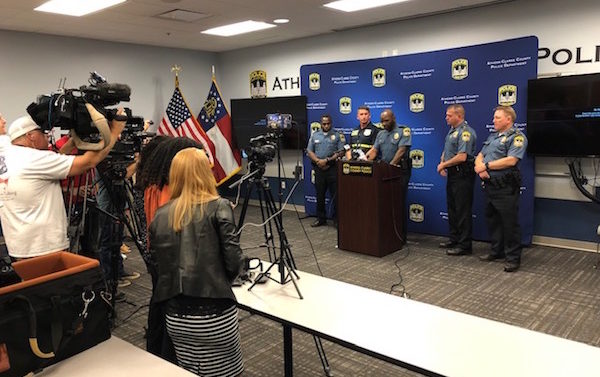 An Athens-Clarke County police officer shot and killed a knife-wielding woman Monday morning on Chalfont Lane, in the Westchester neighborhood off Tallassee Road.

The officer was responding to a 10 a.m. call about a suspicious woman with a knife and possibly a firearm, Chief Cleveland Spruill told reporters Monday afternoon.

The officer retreated, but the 54-year-old white woman ignored his orders to drop the knife, instead “rais[ing] the knife in a threatening manner,” Spruill said. The officer fired, striking her in the torso. Other officers rendered first aid, but she died.

Spruill would not say whether a gun was found and said it’s too early to say whether drugs, alcohol or mental illness were involved.

Video from the officer’s body camera will be released “at some point,” Spruill said.

The woman has not been identified because her next of kin has not been notified. Nor did Spruill name the officer, although he did say that the officer had not been involved in any of the previous four shootings this year—three of them fatal.

Most recently, on Oct. 6, an officer shot a man who was brandishing a machete during a domestic dispute at a Baxter Street apartment. As of Oct. 9, Salvador Salazar, 28, was in serious condition at a local hospital. Spruill said Monday that he had no update on Salazar, who is charged with aggravated assault on a peace officer.

In the past eight months local police have also shot a man who pointed a realistic-looking air pistol at them during a standoff in a Westlake Drive parking lot; a Peeping Tom suspect who answered the door with a knife when officers came to his house; and another man with a knife who attacked officers at a Macon Highway apartment complex.

Prior to March, the last time an ACCPD officer shot a suspect was in 2016, although one fired his weapon in 2018 and missed. The last fatal police shooting was in 2010.

The shooting Monday was the 68th officer-involved shooting in Georgia this year.

As is standard practice, the Georgia Bureau of Investigation is investigating the shooting, and the officer has been placed on administrative leave with pay.