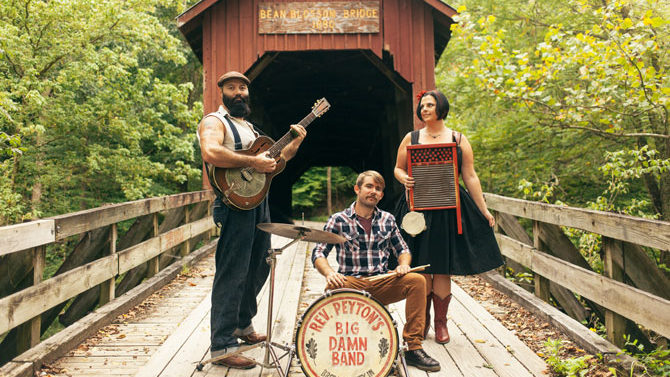 There’s a sinister energy that runs through the decades-long catalog of the Supersuckers, guitar-rock stalwarts with iconic albums like Devil’s Food and La Mano Cornuda (“The Horned Hand”). The vibe from Rev. Peyton’s Big Damn Band is decidedly more benevolent, drawing on its frontman’s love of traditional Delta blues and gospel, and the region that birthed it.

Getting the two groups together to co-headline a national tour might sound like a wager—or a rare collaboration—between God and the devil, but Supersuckers vocalist and mastermind Eddie Spaghetti says the idea sprang from a more grounded source. “Our booking agency thought it’d be a good fit, and it has been.”

With a few sold-out shows already under his belt, Peyton sounds happy and relaxed speaking from the West Coast leg of the tour, even while making an emergency run to replace a mysteriously shattered van window. “Supersuckers are definitely very different from us, onstage and off, but it’s been great,” says Peyton. “It’s a lot of music for the fans.”

Though they’d never encountered each other before, the two bands are united by their rambunctious joy. Established in 1988, Supersuckers are the senior members of the tour—not that Spaghetti’s swagger suffers a hit in anyone’s company. They’ve worked with everyone from Willie Nelson to Eddie Van Halen to Kelly Deal to Lydia Loveless, who appears on their latest album, Holdin’ the Bag. “It’s hard to be the coolest guys in the room when you’re with the Supersuckers, but they do a good job,” Spaghetti says of his tourmates.

Released in 2015, Holdin’ the Bag is a country album that marks one of the band’s periodic departures from its signature post-rockabilly sound, though it features the same raucous spirit that animates albums like The Evil Powers of Rock ’n’ Roll. A cancer diagnosis kept Spaghetti from hitting the road to support the album upon its release, but he’s happy to report that he is now cancer-free and ready to “keep on keepin’ on.” He has a lot of affection for the new material, but says the all-country set the band has taken on the road is “our attempt to get tired of playing country music, so we can get back to playing rock.”

The trio that makes up Rev. Peyton’s Big Damn Band is also enthusiastic about its set, which draws heavily from the group’s hard-driving, fun-loving 2015 release So Delicious. Peyton says he considers it their best album yet. “It’s easy to listen to and fun to play. Usually I’m bored with the songs by the time the record’s out, but this one is not that way for me.”

Part of that, he says, is because of his role as producer, something he’s been doing lately for other acts as well. Another part is being associated for the first time with Yazoo Records, best known for its loving reissues of lost 1920s blues masters. “I grew up being obsessed with everything Yazoo Records put out,” Peyton says. “Seeing that imprint on the record has been a really special thing—more than I can explain.”

Asked about the possible spiritual divide between the bands, Spaghetti says Rev. Peyton isn’t going to convert him. “It’s all Santa Claus and the Easter Bunny to me. We side with the bad guy because it’s more fun.” According to Peyton, his only plan for the Supersuckers is to get them all on stage together as much as possible. Peyton would also like to get Spaghetti to appear on his new podcast, “Hard Times and Weirdness,” which leapt into iTunes’ top 10 music podcasts upon launching last month with almost zero promotion.

Peyton says fans at the 40 Watt show can expect to hear new material drawn from the Big Damn Band’s next album, set to drop in late winter. Spaghetti, meanwhile, just wants to share a sincere warning for anyone attending. “Tell everybody to wear their clean underwear,” he says, “because we’re going to rock their pants off.”