Unknown Hinson Is a Country Icon for a Strange Age 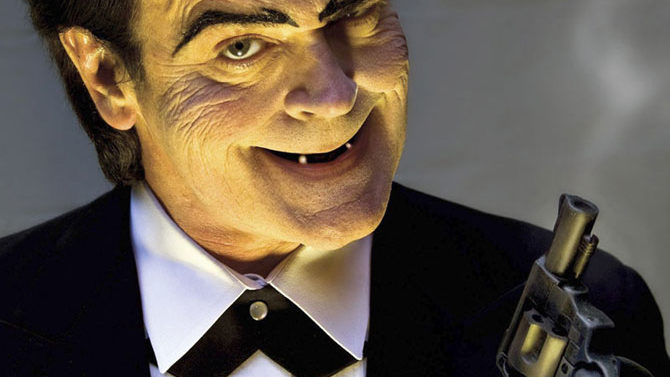 It’s officially a tradition: Unknown Hinson, country music’s only chart-topping rockabilly vampire, is returning to Athens for a Halloween-time show at The Foundry. Dark but colorful, comic but unnerving and double-drawled for your pleasure—first that guitar, then that voice—Unknown Hinson’s songs mask forward-looking satire in music straight from the Hank Williams era.

Riffing on standard country themes like drinking and carousing, mayhem and revenge, tunes like “Put Out or Get Out” and “Talk American” raise both a salute and a middle finger to regional attitudes that could be called, in today’s parlance, “problematic.” Hinson doesn’t talk politics, but it’s hard not to look at the current moment—Trump, Weinstein, Charlottesville—and think that Hinson was way ahead of his time when he got his start on a North Carolina cable-access TV show in the mid-’90s.

Hinson is also steeped in the Weird Old South thing. Despite his look—black tuxedo, black mane and mutton chops, the occasional hint of fangs—and certain B-movie subject matter (“Undead Blues,” “Trunk of My Cadillac Car”), he doesn’t claim to be a vampire. Speaking over the phone from his North Carolina home, he tells me that a certain set of fans started the vampire rumor on his behalf, and he isn’t obliged to discourage anyone: “If it makes them happy to believe I’m a vampire, it don’t bother me none. I could be called worse things.”

Hinson does own up to spending 30 years in prison for murder, which he is more or less grateful for. “I ain’t bitter about it, and I don’t think it was time lost. I’m a songwriter, and a writer needs solitude,” he says. “Lord knows I had plenty of that. It gave me a lot of time to polish up my guitar skills and singing skills and whatnot. I think it’s taxpayer money well spent.”

In past interviews, Hinson has filled out the backstory with tales of a mom who disappeared when he was 10, after naming him for his father (“Unknown”) and teaching him a single chord on the guitar. Adopted by the carnival, he spent the rest of his childhood in a sideshow. That legend is up for debate; certain “alternative facts” present the case that Hinson is a character invented by music teacher and session musician Stuart Daniel Baker, but the man fans see on stage isn’t saying either way.

Besides touring for months at a stretch (in addition to other dates, he’s made eight tours so far this year alongside the Rev. Horton Heat, and is booked clear into April), Hinson also contributes his voice to the Adult Swim cartoon “Squidbillies,” which just kicked off its 12th season—“longer than ‘Leave it to Beaver,’” Hinson notes. As a fan of cartoons, he was excited to take the job, which the show’s creators offered him after listening to one of his albums. He’s had fun playing ornery Appalachian squid Early Cuyler, which he can do almost entirely from a sound studio not far from his home.

It’s also introduced him to a new audience. “A lot of younger folks don’t know from me, but they see the show, and they say, ‘Who the hell’s this?’” Hinson has noticed “a lot more younger people” coming to his shows, and reports that they “seem” to enjoy it. “Ain’t had no tomatoes thrown at me yet, anyway.”

Between tours, he’s happy to get back home, where he spends time sitting on the patio with his dogs and his “party liquor,” tinkering with old cars and surveying his domain. “My back yard is right behind an auto garage,” he says. “It’s a real pretty view.” Even in his small town, and in his plainclothes, Hinson says he gets recognized pretty much wherever he goes. “They see my black hair, my pointed nose, my pointed chin and they say: ‘There he is,’” says Hinson. “I can’t deny it. But it doesn’t bother me, people coming up to me and saying hey. I got no enemies.”

Still, he’s looking forward to Halloween, the one time of year when he can “sort of blend in,” and returning to Athens. He promises fans that he’ll put on the best show he can. “I’ll play my guts out for you,” he says. “Celebrating Halloween, we want everybody to get drunk, raise hell and be real careful getting home.”