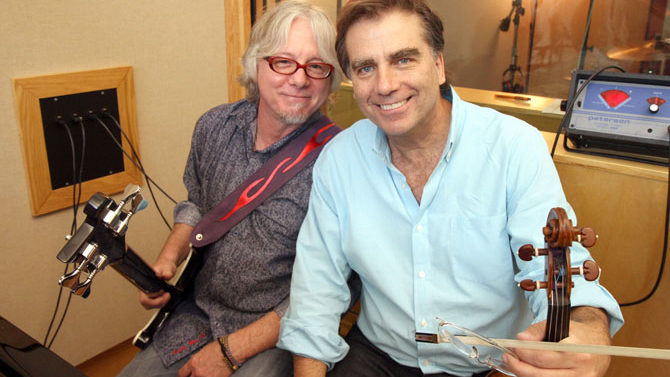 In the heart of Georgia, about 90 miles south of Athens, lies Georgia’s other music city. Macon is rich with artistic history and heritage, having spawned such legendary artists as Otis Redding, Little Richard and The Allman Brothers. It is in this creative hotbed that two musical families, the Mills and the McDuffies, formed a lifelong bond.

The Mills family, transplants from California, wanted to ensure a musical education for their son. “My parents chose the church that we went to in Macon based on the music program,” says songwriter and multi-instrumentalist Mike Mills. “Bobby [McDuffie]’s mother was the music director, and they thought she was the best they could find down there.”

As adolescents, Mills and Robert McDuffie became fast friends while performing together in the choir at church. After services, the Mills family would head over to the McDuffie house to socialize. “Every Sunday night for many years, I felt like we were all McDuffies for a day,” says Mills.

After high school, Mills and McDuffie parted ways. Mills went to UGA, where he and fellow Maconite Bill Berry would famously form R.E.M with Michael Stipe and Peter Buck. McDuffie was off to Juilliard, and on to become a Grammy-nominated violin virtuoso. But their mutual admiration only strengthened with time.

“I’ve always been really proud of him,” says McDuffie. “I consider Mike Mills one of the greatest living American composers.” Confirms Mills, “[We] became big fans of each other’s musical careers.”

With two distinguished yet highly divergent musical careers, it didn’t seem likely that Mills and McDuffie would cross paths on tour, much less share a stage. But McDuffie is in the habit of defying expectations.

“It’s important for me to keep experiencing new ways of making music,” he says. “I’ve always wanted to reach out to living American composers, instead of playing the same pieces over and over again by dead, white European males.” To this end, he commissioned Philip Glass to compose “The American Four Seasons,” which debuted to rave reviews in 2009.

Energized and inspired by that project’s success, McDuffie set his sights on collaborating with his old friend. In 2014, over dinner at The National, he pitched his idea to Mills and R.E.M. advisor Bertis Downs. “I… threw out this crazy idea about writing a concerto for violin, rock band and orchestra,” he says. “I was scared, because I didn’t know what his reaction would be.”

At the time of the proposal, Mills was at a crossroads. After 31 years, R.E.M. had amicably parted ways, and Mills had to decide whether he wanted to retire or continue making music. The former was never really an option. Mills already had a melody in his head that he thought would be perfect for the project, and the chance to collaborate with his dear friend was too good to pass up. So he got to work composing his first concerto.

“It’s a very intimidating thing, because some of the crowd will be classical fans, I assume, and they have some pretty exacting standards,” says Mills. On the flip side, Mills acknowledges that rock and pop fans may feel intimidated by classical music.

“People are scared of classical music, because they are afraid they won’t understand it and others around them will,” he says. “You never want to be the person who starts clapping before the piece is over. The concept of movements with only silence between them is intimidating, because when you go to a [rock] show, you play a song, you clap, you yell, you get a drink and then you play another song. I’m hoping to break that down.”

McDuffie encouraged Mills to inject some “R.E.M. DNA” into the work. “I wanted a kickass opening, much like what they did with the Accelerate album,” says McDuffie. That intro segues into a movement that should be instantly recognizable to R.E.M. fans. “If Shostakovich could steal from himself, I asked Mike if he could just include ‘Nightswimming’ as one of the movements,” says McDuffie with a laugh.

McDuffie says this concerto is unique in its execution. “There are… shows where orchestras like the London Symphony will back up an established group like Pink Floyd,” says McDuffie. “That’s good, but it’s a more deferential role on the classical musician’s part. Here, we’re in the trenches together. Nobody is backing anyone up.”

“It’s not going to be stuffy,” Mills stresses. “I don’t plan to wear a tuxedo. It should be more fun than a classical concert… because this is not a classical piece. It is a hybrid of classical and rock and roll. I want it to have the good parts of both, and, hopefully, the bad parts of neither.”

“It’s just an honest and sincere project, on both of our parts,” says McDuffie. “We admire each other and also each other’s worlds, and I think that’ll come through.”