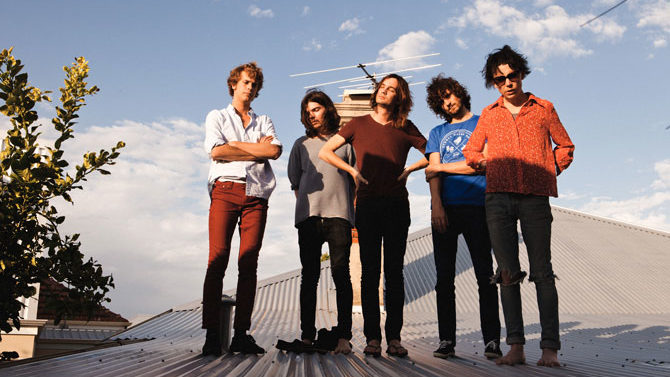 Kevin Parker speaks to Flagpole from the future. While we’re still wiping the sleep from our eyes, Parker is enjoying a night out with friends he “hasn’t seen in years” in his hometown of Perth, Australia, some 13 hours ahead. He’s amiable and open despite the interruption, putting his social life on hold to discuss the painstaking, solitary creation of his band Tame Impala’s latest release, Lonerism.

Parker steps outside the buzzing pub with his new cellphone in hand—a gift his manager purchased mainly for interview purposes. Until recently, Parker was notoriously off the grid. He still dismisses Facebook as “an absurd concept,” emphatically stating that he “definitely doesn’t need to know what everyone [he] ever knew is doing every day.” But the phone, well, it’s growing on him.

“I just started getting into, like, having a phone and texting people,” he laughs. “Which now I realize is actually extremely useful, because I can actually contact my friends… Makes you wonder what the hell I was doing before I got a phone.”

It might also make you wonder how the hell a guy working alone on an album about loneliness in the place travel writer Bill Bryson called “the most remote city on earth” made it to our ears at all.

Consider it a lesson in the pervasiveness of modern media. The fact is, Parker is no Luddite. His vocals may resonate with delightfully Lennon-esque timbre, and his bright psychedelia borrows hooks and tone from a bygone era, but Tame Impala is a modern band whose creation and success has been made possible through modern means.

In fact, the band got its first big break via the net in 2008, when tastemakers Modular Recordings heard Tame Impala’s tunes on MySpace and began courting the band. Other labels followed, but ultimately, it was Modular’s willingness to embrace Parker’s unique creative process that landed it the winning bid. Parker has continued working in his home studio, playing all the instruments on Tame Impala’s albums himself in the name of creative efficiency.

“I try to set myself up in an environment where ideas come out the most pure and untainted by logical thought,” he says. He describes his studio as the biggest room of his house, with a chair for himself in the middle surrounded by mounds of gear plugged in within an arm’s reach. “If you have an idea for a part, like a melody or a guitar line, the longer you think about it the more it breaks down and turns into something else that wasn’t the original idea. The quicker you can turn it into real sound, the purer the idea comes across in the song.”

With the lush, vintage aesthetic that permeates Tame Impala’s sound, it’s easy to imagine Parker as an analog purist, but he actually prefers the flexibility of digital recording. (“I couldn’t imagine working on tape. It seems like it would take five times longer,” he says.) Still, for a perfectionist like Parker, the limitless potential of digital can actually prove overwhelming, if not downright counter-productive, and despite his love affair with the magic of artistic spontaneity, the creative process of crafting Lonerism was a drawn-out, tedious affair.

“I started working on it almost the day [previous album InnerSpeaker] was finished, and the label wasn’t expecting to see anything for like two years. So, I just worked myself up into a frenzy of recording every day and getting completely driven insane by minor details of each song… I don’t regret it, but I don’t think I’ll put myself under that pressure again.”

As for the record’s lyrical themes, Parker has said that Lonerism is less about actual solitude and more about feeling alone despite having company around. It’s about that sense of distance and rejection that weighs most heavily when we’re in a crowd.

And lest you think Parker is some kind of hermit, there is also another side of Tame Impala that embraces a more collaborative spirit: the live show. The name Tame Impala has been used to refer to both Parker’s live band and his solo recordings—two entities he says always coexisted but weren’t necessarily connected until he signed with Modular. And while the band played its fair share of shows in Perth, touring wasn’t really an option until the label came into the picture.

“It can be hard [to tour as an unsigned band], because Australia is so spread out,” Parker says. “It’s really expensive for bands, and pretty unrewarding… We were never that desperate to get out and tour. We pretty much waited until it was required of us.”

It’s safe to say that with accolades pouring in from all corners of Earth, it has indeed become a requirement. Parker says getting out and seeing the world has given him a new perspective and appreciation for his hometown.

“You sort of have these assumptions that every other city in the world has what yours has. For example, something so surface-level as having a beach no more than 10 minutes drive from wherever you are—which is actually extremely rare, we discovered—I’m like, ‘Fuck, how do they live so far away from the beach? It’s the most cleansing and spiritual thing in the world; how do they live without it?'”

Despite the lack of an ocean view, perhaps Tame Impala won’t feel so far away from home in Athens. Parker describes Perth as “slow-paced and chilled.” He says the music scene is incestuous, full of collaboration and experimentation, with a higher premium put on creativity than commercial success. Sound familiar? And while we may not know the sort of geographical isolation that comes with life in Perth, Athenians have certainly been accused of living in a bubble apart from reality—a sort of psychological lonerism.

Then again, what does isolation really mean in 2013?

“Now, anything is possible, in terms of going places and communicating,” says Parker. “Everything is connected these days.”

WHO: Tame Impala, The Growl
WHERE: Georgia Theatre
WHEN: Saturday, February 23
HOW MUCH: SOLD OUT!