Warehouse Plumbs the Depths on LP No. 2 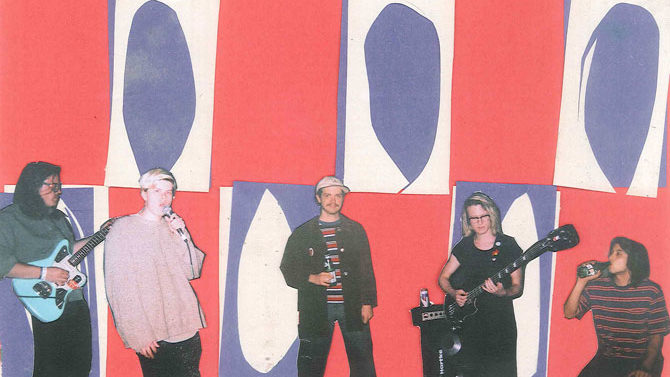 [Note: Flagpole learned just at press time that Warehouse has canceled its tour, including the Thursday Caledonia show.]

Don’t let Atlanta post-punk band Warehouse’s quick ascension in underground circles fool you. The five-piece, which quickly became the capital city’s freshest musical export following the re-release of a stellar debut album on Brooklyn indie Bayonet Records, hasn’t had it quite so easy.

For instance, take the recording of the group’s most recent album, Super Low, which bore the weight of a band unexpectedly thrust into the spotlight. Early last year, Warehouse was featured as a Stereogum Artist to Watch after Bayonet—spearheaded by industry mainstay Katie Garcia and her husband, Beach Fossils’ Dustin Payseur—announced it would provide a physical release for Tesseract, the band’s first album, which was released digitally in 2014.

Super Low was tracked in New York following a two-week tour before Edenfield, wanting to polish her takes, re-recorded vocals at home. The band then submitted the album to its label, but “they kindly asked us to just scrap the whole thing,” Edenfield says. Warehouse then started from scratch, recording the album at the Living Room in Atlanta, where they originally recorded Tesseract in a day. Although unplanned, the additional sessions resulted in a final product Edenfield and company were very happy with.

Recording hiccups were just the tip of the iceberg, however, considering what lies beneath the surface of Super Low’s 10 songs. Warehouse has always excelled in transferring the principles of abstract expressionism to its music, allowing Edenfield’s relatively cryptic lyrics to form impressions in listeners’ minds instead of presenting direct narratives. The group’s sophomore album doesn’t digress from this philosophy, but a simpler, more pointed melodicism from the guitars and bass actually brings more focus to Edenfield’s personal writing.

“My style of songwriting is, for better or worse, very personal, but also in contrast really vague and open to interpretation,” Edenfield says. “I like to have [my lyrics] be this ambiguous but hugely emotional thing you can find lots of personal meaning in.”

Much of the album centers around the dissolution of a long-term relationship, which Edenfield copes with in myriad ways. Her signature gruff growl describes an attempt at self-preservation on the album’s title track, as she sings, “You’re reeling me in/ And wringing me out” and “Gouge my eyes/ And make me see another way.” Elsewhere, there are attempts to balance devotion with an inevitable end, like on “Reservoir,” which provides the closest thing to an uplifting mantra one will find on the record: “Don’t ever fall behind/ Just ’cause it’s easier/ Don’t ever lose your place/ Or throw it all away.”

Written in part at a punk house Edenfield says was eventually torn down to make way for a parking garage, the remaining songs that made the cut were completed at a newer home across the street from Super Low, a food mart. The title “seemed to fit, because the album became about going down into this deeply endogenous place of introspection and destruction, only to come out in a new and not-so-familiar landscape,” Edenfield says.

While there is much common ground between Tesseract and Super Low, the band sheds the texture and complexity of the former for its latest effort. “The songs on Super Low came together as a more concise continuation of Tesseract and [were] written largely in the same style,” Edenfield says. “Many of the songs are written by Alex [Bailey] and Ben [Jackson] on guitar, and everyone else is trusted enough just to fill in however they see fit.”

The subtle changes in sound mostly have to do with the band’s own critical analysis and deliberation. “We are slow songwriters, and so we had lots of time to figure out the elements of Tesseract that we did and did not like,” says Edenfield. “We knew we wanted more variety and intentionality, like, for example, a very slow-moving song with only talking, or a long instrumental bit.”

Having already incorporated these new songs into its sets for some time now, the band is ready to embark on a short two-week tour this October up the East Coast and throughout the Midwest before hitting the West Coast and Europe next spring. And as tends to happen with artists that are required to focus on a particular project for an extended period of time—and especially when that material comes from one’s deepest, darkest depths—the group is already motioning towards album No. 3. For now though, the members of Warehouse can breathe a sigh of relief as they put the strains of Super Low behind them.