With Pity Party, Taylor Chicoine Brings the House Show to the Web 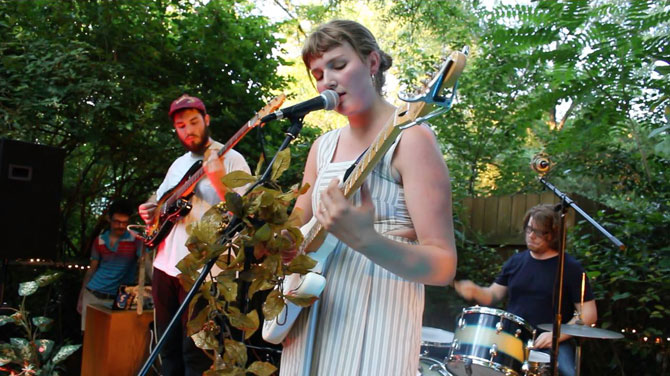 If an Athens band breaks up and there was no one there to record it, did it ever really exist? The question has confronted countless townies over the years, and has only grown more crucial in the digital age of content creation and sharing.

“There are so many people in Athens who play music,” says videographer Taylor Chicoine. “The music’s all really great, but it’s such a transient town that people play for a few months, and they never play again. If I could document a snapshot of what’s happening right now and put it on the internet, it’s there forever.”

Chicoine, who graduated from UGA in 2013 with a degree in mass media arts and a certificate from the Music Business Program, has been doing just that for about a year with a multifaceted, multimedia concept that includes two distinct outlets: an intimate house-show series for local bands and live video sessions for touring acts making a stop in town. The videos, posted on Vimeo, offer viewers a glimpse of Athens’ DIY spirit.

Dubbed the tongue-in-cheek Pity Party Social Club, the series began with shows in the backyard of Chicoine’s Normaltown residence every two weeks, and has featured quieter sets from songwriters Lee Ann Peppers, Erin Lovett and former Athenian Evan Tyor, as well as noisier performances from groups like Dead Neighbors and Saline. “The cops have come probably five or six times,” Chicoine says with a laugh, “but they’ve never written me a citation. They’ve been really cool, actually.”

Shot during the middle of the day, when the risk of receiving a noise violation is far lower than on a Sunday night, Chicoine’s Pity Party Presents branch allows touring bands an opportunity to acquire some promotional material while on the road. “Who knows what they do [during the day, before their show],” Chicoine says. “They come to Athens—this is a small town—maybe they’re just hanging out.” Olympia, WA band Oh, Rose and Atlanta folk-pop group 100 Watt Horse have recorded sessions, as has former Athenian Cara Beth Satalino, with her Baltimore band Outer Spaces.

As Chicoine’s central ideas have grown in scope, he’s had to make a few adjustments. Now the sole organizer, videographer, audio engineer and editor for the gatherings and their accompanying media (Tyor assisted with recording before moving in early May), Chicoine is now spacing out events to reduce stress.

“I did shows every other week for a few months last year, and that was really hectic,” says Chicoine, seated on a lawn chair atop his backyard stage. “To book four bands for a month and then set up and film and put it out and keep it up just got kind of stressful,” he says.

That’s not to say he’s losing steam. In addition to the house shows and live sessions, the Pity Party name was recently attached to new recordings by the aforementioned Dead Neighbors. “They’re the first band that I recorded in the house just for audio purposes,” says Chicoine. On top of that, Chicoine is set to record the forthcoming album by up-and-coming local punk group Nihilist Cheerleader, which will be released through his own, newly christened label, Perfect Attendance Records. “So the Pity Party is the social club and the touring bands and, now, the inside recording—it’s just a catch-all for any music stuff that comes out of the house,” Chicoine jokes.

There will be plenty more music pouring out of the Pity Party house soon. WANDA and Jianna Justice recently brought a little cheer to the miserably misnomered backyard gathering, and Chicoine is currently lining up shows for the rest of the summer. Though the space’s proprietor will split his time between booking bands, setting up mics, mixing audio and shooting video, to him there’s nothing more enjoyable than putting together a finished product—a snapshot of what’s happening in Athens music.

Well, that and calling it a night. “My favorite part of the house shows is when they’re over and the last band finishes, and then I grab a beer and start coiling cables and sit down,” he says with a laugh.