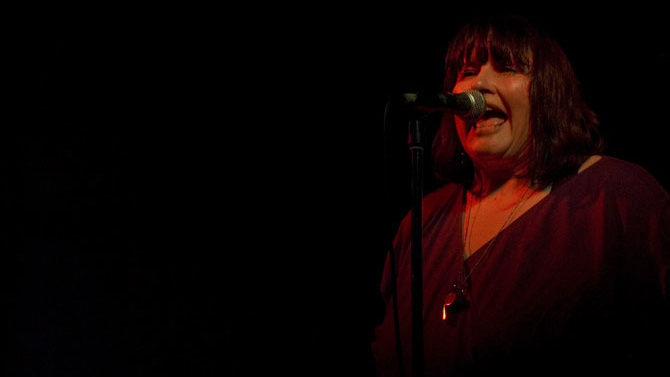 Pylon’s legacy lives way beyond “Cool” appearing in a Lexus commercial, as evidenced by growing interest in singer Vanessa Briscoe Hay’s all-Athens tribute act, the Pylon Reenactment Society. The project was born in May 2014, when local musician Jason NeSmith asked Hay to perform a 15-minute set of Pylon material for the first Art Rocks Athens. In August 2015, a second annual celebration of Athens’ art and music scenes from 1975–1985 found Hay and friends performing a full opening set for Atlanta new-wave pioneer Kevin Dunn and the B-52s’ Fred Schneider.

“That set went over really well,” Hay says. “Our friends in Dressy Bessy heard about that show and asked us to open for them on four slots of their national tour to promote their new album. We said ‘heck yeah!’”

Hay makes a point to differentiate these sets from the Pylon canon. “Pylon died when Randy [Bewley] passed away,” she says. “We do try to be faithful in spirit, and I have the blessing of Michael Lachowski and Curtis Crowe. I sure wouldn’t do it if they disagreed in any way.”

NeSmith doubles as Hay’s guitarist, while fellow Casper and the Cookies member Kay Stanton plays bass. Both have played with Hay before in “Appalachian wave” collective Supercluster. The Glands drummer Joe Rowe and local keyboardist Damon Denton round out the re-enactors. “We have added a keyboard player for some songs, but Pylon did a little bit of doubling up in the studio,” Hay says. “And there is keyboard on some parts of Chomp, so it is not out of the spirit of Pylon.”

The band name is an inside joke from Pylon’s third run that first surfaced in a 2010 Georgia Music magazine feature. In the article, bassist Lachowski likens the band’s 2005–2008 comeback to being in a Pylon Historical Reenactment Society. “I don’t remember who said it first, but basically we were having to relearn everything and called ourselves that at practice,” Hay says. “When I had to put a name on this project to set itself apart from Pylon, I shortened it a little. We only have one original member and can’t call ourselves Pylon—although I know there are other touring bands out there that only have one original member.”

For Stanton, unraveling Pylon songs has magnified the band’s mystique. “When I get in there and start dissecting a song, I can’t tell you how many times I’ve thought, ‘How the hell did they do that?” she says.

Learning Bewley’s guitar parts has not demystified the band’s aura for NeSmith, either. “The more I got into them, the more convinced I became that what they did was very special, but the less certain I was about how they did it,” he says. “Even befriending them didn’t really help to explain the process. They are all pretty regular people in most ways. But together they worked on another level that maybe even they didn’t understand.”

Rowe, a part of regional indie rock lore in his own right, mirrors his bandmates’ reverence for the songs and story behind Pylon. “When I moved to Athens in the fall of 1987 to go to the UGA school of music, one of the first things I did was go to Wuxtry Records and buy two cassette tapes,” he says. “One was a record by The Fall and the other was Gyrate by Pylon. I vividly remember driving around Athens’ hilly one-way streets, playing those Pylon songs over and over. For me, they fit in perfectly with all the other stuff that I was listening to: Devo, Gang of Four, Sonic Youth… I quickly started playing in bands in Athens and dropped out of school.”

Denton is the odd man out in some ways—a classically trained pianist instead of a punk rocker, filling a role absent from the Pylon live set. Still, he finds these songs are not the complete opposite of classical compositions. “Being in a Pylon project is exciting for me because my classical/contemporary piano world is mostly acoustic and unplugged,” he explains. “Pylon is similar to me only in that it’s like chamber music: a quintet. The music has historic placement, which amps up its live show effects.”

The enduring legacies of 1980’s Gyrate and 1983’s Chomp should provide plenty of fuel for future Reenactment Society sets. Still, Hay does not rule out the possibility of new, non-canon material. “It would be fun to write a Pylon Reenactment Society song done in the spirit of Pylon,” Hay says.