Mike Cooley on the Drive-By Truckers’ Legacy and Future 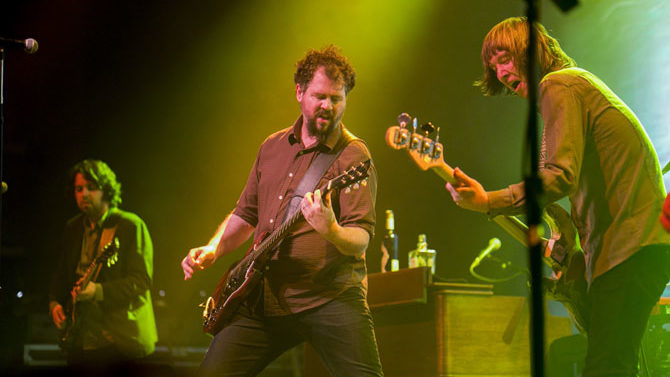 Following Patterson Hood’s move to Portland, OR last year, some diehard Drive-By Truckers fans may wonder about the future of the longtime local outfit. Although the group’s headquarters remains in town, most of its members now reside outside of Athens.

Nevertheless, Birmingham, AL-based guitarist Mike Cooley is confident that Hood’s move won’t affect the band. “I haven’t really thought about it,” he says. “I see Patterson about as much as I did when he lived in Athens, honestly. It’s gonna be different for him. This is the first time we’ve done anything in Athens as a band that he won’t go home [afterwards] to his house down the street.”

Known for their raucous live show and relentless touring, the Truckers are riding a wave of praise for their recently released live album, It’s Great To Be Alive, a massive collection of songs recorded by David Barbe over several nights in San Francisco. Cooley says the project became especially important when the band’s members discussed how they’d prefer to be memorialized in years to come.

“It serves the purpose, if anyone wants to ask it, of answering the questions: Who are the Drive-By Truckers? What’s their deal? What’s the story? What do people who like them like about them?” says Cooley, reflecting on what the live record signifies at this point in the band’s career. “I realized—and I think we all did—that if we got this right, it’s gonna be this one thing that we have to show for this whole career.”

Despite the challenge of deciding on what songs belonged on the album, Cooley says the process was relatively smooth sailing. “The only thing that was hard was getting a five-record set pressed. That was kind of a bitch,” he jokes.

Rather than the live record putting pressure on the band to deliver another knockout studio release, Cooley says it’s a relief simply to celebrate a milestone. “It serves as closure on however many eras the live record represents. I was already in pursuit of songs that are going to wind up on the next album,” he says.

In fact, following a run of shows last fall, the band booked time in a Nashville studio with Barbe to spontaneously capture their progress on a batch of new material. “Initially, we weren’t going to lay down the whole album. I wanted to record what we had and go somewhere else,” says Cooley. “We had three days, and we recorded nine songs. So I said, ‘I think we have an album here.’”

Although Cooley says the album will likely be mixed at Chase Park Transduction with Barbe at the helm, the forthcoming release will be the band’s first not recorded in Athens since 2006’s A Blessing and a Curse.

“We were all pretty excited about the idea of going somewhere where nobody lived. If you’re close to home, there are distractions,” says Cooley. “The process, once we were there, wasn’t all that different—the mood, the feel of everything, our behavior, it all became familiar again,” he says.

Though Cooley contributed as many songs as Hood for the Truckers’ last studio offering, English Oceans, he says he doesn’t want to jinx his burst of songwriting productivity, which can come and go in an instant.

“We all want artistic freedom until about the third hour of staring at that blank sheet of paper, and then we’re just dying for someone to tell us what the hell to do,” Cooley says with a laugh, adding that some of his spare time is now devoted to forming songs for his first solo release, a move familiar to his counterpart Hood.

“I’m trying to push myself to write songs for something like that. I’m trying to carve out some kind of vision that points me to that blank piece of paper. It is important for me to do something like that at some point. I’ve always said that if I had the songs, I’d do it, but I don’t think I’m ever going to have them unless I make that a goal,” Cooley says.

Although the new Truckers album is mostly completed, Cooley has his sights set on another sold-out string of shows in the town that launched the band’s career and performing for the folks who keep his career going. “Nowadays, it’s for the fans. They look forward to it all year. It’s their homecoming as much or more than it is ours, and it’s a blast to see.”