What’s It Like to Be a Woman in Athens Music? 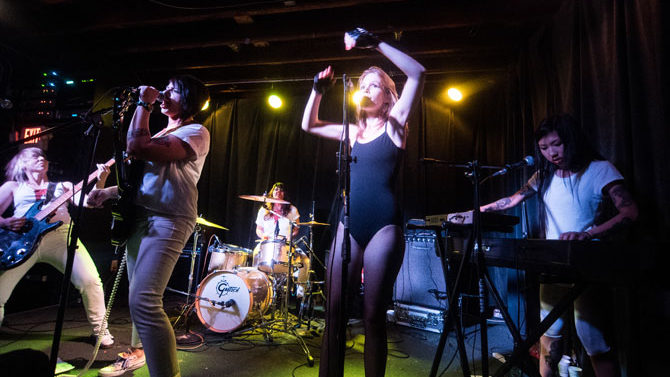 Shehehe guitarist Noelle Shuck was setting up her gear at a recent show when an audience member approached. “You sure are cute,” he said. “If you’re not here with a guy, something’s wrong.” Later, before the band’s set, the guy approached her again, handing her a piece of paper with his phone number on it. “That’s where the party is,” he said.

After the show wrapped, as she talked to her bandmates on stage, she heard him again: “Hey, chick!” She turned to look at him. “I’ll be at Waffle House for the next 45 minutes. Are you going to come meet me?”

“I hadn’t given any signs that I liked it,” Shuck says now. “Assume that unless you hear ‘yes,’ then the response is ‘no.’ Consent doesn’t just apply to sexual intercourse, but more nuanced social settings.”

Shuck posted about the interaction on social media and received several replies indicating that the man is often a problem for female musicians at shows in Athens. “If this is a known problem, what are we doing about it?” she says. “It’s not OK to not address these ongoing problems that are making people feel uncomfortable.”

Shuck’s experience is familiar to many women in the Athens music scene. When Casper & the Cookies held an audition for a new drummer a few years ago, a male candidate, overhearing bassist Kay Stanton talk about her amp, turned to the band’s guitarist (and Stanton’s husband), Jason NeSmith, and remarked that it was “cute” that she acted like she knew something about gear. Needless to say, the guy didn’t make the cut.

When Man or Astro-Man? guitarist Sam Paulsen first started playing music as a teen, she knew what to expect at music stores. The progression of questions: “Do you need help finding a tambourine? Do you play clarinet for the high school band? Oh, you play guitar—acoustic?”

The stories repeat. While on tour in her early 20s, Eureka California drummer Marie Uhler remembers playing a basement show and having a great time. As she loaded out, a guy shouted that she’d be “good at doing other things with her hands,” as well. “Why was I being sexualized while sweaty and wearing a T-shirt?” she asks. “There was nothing sexy about it.”

This treatment of female musicians is nothing new. At a show in Los Angeles in 1990, Pylon vocalist Vanessa Briscoe Hay decided to skip sound check because she had a cold and wanted to rest her voice. When she arrived with 30 minutes to spare, the door guy wouldn’t let her in, even after checking her Georgia license. “Pylon are already here,” he said.

“I’ll just sit over here and wait,” she replied. About five minutes before the show started, the sound person tore into the lobby and asked her where she had been. “They wouldn’t let me in,” she replied. “Pylon are already here.” He grabbed her by the hand and whisked her toward the stage. “The look on the door guy’s face was priceless,” she recalls.

Nor is the problem specific to Athens. Similar stories have been told nationwide since August, when the highly respected music critic and Pitchfork Senior Editor Jessica Hopper posted the following on Twitter:

Gals/other marginalized folks: what was your 1st brush (in music industry, journalism, scene) w/ idea that you didn’t “count”?

Hundreds of responses quickly flooded in, clarifying one main point: A difference exists, and a conversation is necessary.

It’s tough to know where to begin in addressing the issue. What is the correct balance, the right words, the productive conversation? Most women want to avoid striking others the wrong way or coming off as staunch feminists, Shuck says. “I don’t want to ruffle feathers. I want to get along with everyone,” she says. “It’s hard to find the line between being assertive and being a bitch. Feminism is a dirty word these days, and that sucks.”

Recent conversations have pointed to the nuance of feminism today, particularly the need to include women of color, LGBT and gender-nonconforming people. “All [feminism] is trying to say is equal footing,” Shuck says. “The non-white cis-ness needs to be addressed, but the roots come from getting everyone on equal footing.”

To start, how do we deal with labels? The phrases “female-fronted” and “all-female” appear on social media, in Flagpole’s event listings, in press releases and in reviews. Such labels can be both a positive and a negative, Paulsen says. While creating a Facebook page for Girls Own Love, the Andrew WK cover band she formed with Stanton, Uhler and others, she began to type “all-female cover band,” and then stopped to think.

“I feel weird about it, because I don’t know how I feel about it,” she says. “We say ‘all-female’ because we think it’s awesome that we’re all strong women who are good at our instruments and in this band together. I want it to be equal and not have to say ‘all girls in the band’ to get people to come to the show. But at the same time, we’re proud that we’re women in this band together.”

Then there is the more serious matter of emotional and physical abuse. After experiencing a five-year roller-coaster relationship with a local musician, Stacey-Marie Piotrowski tries to speak up when she knows about habitually abusive musicians booking shows. A September show was canceled after she and others raised concerns online about those playing.

“It’s frustrating to see people who have done terrible things still enjoy a pseudo-rock lifestyle,” Piotrowski says. “One guy got arrested for choking his girlfriend and still played in a well-known group in town. People always say, ‘What proof is there? How was I supposed to know?’ Look at his mug shot. Look at his family violence charges, which are a big deal in Georgia.”

She names other examples of harassment in the local scene: A male musician reposted women’s Instagram photos with sexual hashtags in the name of art. Another created show posters featuring images of women and their exes without asking for permission. Yet another, she says, sends women threatening private messages on social media.

“[People] say, ‘But he’s such a good musician.’ Being a musician does not excuse bad behavior,” Piotrowski says. “I bet there are good musicians who don’t get to play shows because abusive ones get the stage.”

Piotrowski says she began researching the idea of “privilege” in 2009, at first wondering how she could be considered privileged because she grew up poor. The idea is that gender, skin color, sexual orientation, wealth and educational opportunities offer particular advantages. The outcomes manifest themselves in various forms, either through outright harassment or an insinuation that the disadvantaged group must try harder to make it to the same place of success.

Conversations about privilege are popping up online in art communities, the writing industry, science laboratories and elsewhere. Now, Piotrowski wants to start one locally.

“People interact across the country online and know the vocabulary and mindset, but when you’re talking about it in real life in your local scene, people don’t know,” she says. “Even some of my friends didn’t get it until we talked about it in detail.”

The conversation must start with, well, a conversation, says Motherfucker guitarist Erica Strout. “If we stop making assumptions about other people when we talk to them and interact with them, that would solve many problems across the board,” she says.

In many ways, the productive next steps are in motion in Athens. Girls Rock Athens’ Girls Rock Camp empowers young girls to build self-esteem, learn instruments and perform. The organization’s Ladies Rock Camp promotes the same mission for women over age 18. All-star groups such as Girls Own Love, as well as other bands featuring local female musicians, regularly play packed-out shows.

Now the key is to publicize the positives for the next generation, Shuck says. “We need to bring awareness to young girls who are interested in music that they can do whatever they want,” she says. “You shouldn’t be afraid to do it because you’re a woman. Just do what you love and whatever makes you feel good.”

The Riot Grrrl movement in the 1990s was a big influence on Stanton’s musical development, and she hopes for similar encouragement for young women in today’s scene. “I come from that world of being able to get up there and play,” she says. “That was a big part of what inspired me to start playing. It felt like a safe space.”

Part of Stanton’s solution has been developing an internal response to demeaning treatment. Over 23 years of playing music, she’s moved from insecurity to anger to peace. Now, she tries to give people a pass and assume that the majority of people who make rude or inappropriate comments are trying to be helpful or nice but are simply uninformed.

“On stage, that’s the last thing I’m thinking about,” Stanton says. “I hope people are watching and listening and not thinking about my gender—though I’m sure some are.”

In terms of the Athens music industry, several record label owners, venues and bartenders have stepped up as advocates with a “zero tolerance” harassment policy. When Uhler plays at venues, for example, she asks for a blacklist to block known harassers from attending. She seeks out venues and fellow band members who support different world views. She says she has become less afraid of threats and the social connotations of calling out abusers.

“There are infinity bands in this world and infinity people in this world,” she says. “If 100 hate you or 100 won’t play with you, that’s fine.”

As Briscoe Hay points out, local clubs have historically been mostly supportive of women in the scene. Athens first received national recognition thanks to bands like The B-52s, The Tone Tones and Pylon—all groups with female members. In the late 1970s, Athens music grew out of the art school, vegetarian restaurants and house parties.

“We created our own art and music scene, and it was people-friendly—gay, straight, white, black, hippies, art students, faculty, men, women and transgender,” Briscoe Hay says. “Everyone danced together. The scene was as varied as the people who lived here.”

The biggest change Briscoe Hay has seen is the growth of downtown. As clubs and bars sprout up and more people come from out of town to attend shows, a growing percentage of music audiences will lack manners and go out primarily to get trashed. “There weren’t many clubs in 1978. There were more house parties,” she says. “I used to know everyone, and now it’s impossible.”

Despite the struggle, many local female musicians feel like Athens is overall a supportive community and that the scene is heading in a positive direction.

“Being a female musician in Athens is something to celebrate, because we are a very unique town,” Strout says. “We have so many talented women making music, and I’m excited I’ve had a part in that.”