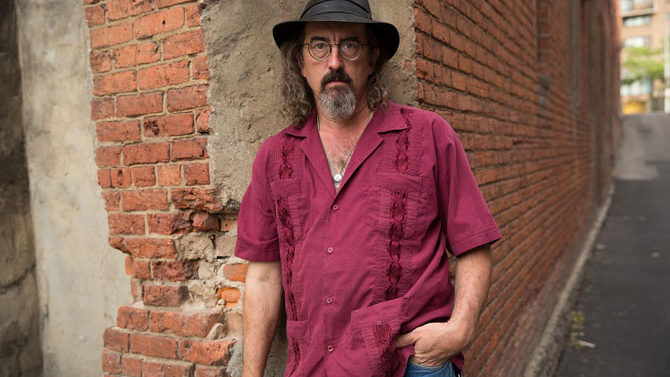 With artists like Sturgill Simpson and Jason Isbell riding a wave of critical acclaim, the state of singer-songwriter music is strong. While those powerhouses are justifiably lauded, there are hundreds of veterans, many of whom have spent decades honing their craft, equally deserving of praise. One such songwriter is James McMurtry, whose latest release, Complicated Game, is a cache of supremely well-written songs that should appeal to a wide audience.

Recorded in piecemeal fashion when he wasn’t on the road, Complicated Game shows McMurtry embracing advancements in recording technology. With Mike Napolitano and famed Louisiana producer C.C. Adcock at the helm, the album sounds as pristine as anything produced in a state-of-the-art studio, despite being tracked in living rooms.

Although McMurtry hails from Austin, TX—the self-proclaimed “live music capital of the world”—he is quick to note that it’s not all roses in the Lone Star State’s capital. “Austin is exploding right now. We go out on the road and come back and the skyline is different. It’s getting to where musicians like me can’t afford to live here anymore. It’s going to affect the music scene,” he says.

One cost of gentrification, says McMurtry, is that the music scene is bending to the will of developers. “We’ve got people putting up high-rises next to the existing clubs. The people in the condos bitch about the noise. Developers are urging the city council to lower the noise ordinance to 70 decibels at the property line. You can sneeze louder than that. That means no music. So, it’s very possible that this whole thing might go away.”

Still, McMurtry has found a way to make a living, albeit mostly outside of his hometown. For the past few decades, he’s toured the U.S. relentlessly, receiving impressive endorsements from the likes of Isbell and Stephen King. In fact, the songwriter has spent time on the road with Isbell, a colleague McMurtry says has always been generous to his operation, even after the former Drive-By Trucker’s career took off.

Now in his 50s, McMurtry is keenly aware of how a changing industry has turned traditional promotion on its head. Where artists used to tour in support of a record, the inverse is now the case.

“That’s just the business in general. That’s just how it turned around,” he says. “Spotify and Napster came along and pretty much did in record sales and mailbox money. If you can tour, you can still make a living. We didn’t make a record for a long time, because we didn’t need to. Our tour draw was holding up pretty good. When that’s happening, you can’t afford to stop and make a record.”

McMurtry’s touring unit has stayed consistent for quite a while; it’s almost always four guys in a van. Joined by Daren Hess on drums, Cornbread on bass guitar and Tim Holt on a multitude of instruments, the band consistently plays hundreds of shows each year in nearly every corner of the country. In true DIY fashion, Holt also serves as as McMurtry’s front-of-house sound engineer, running the board for a few songs before joining the band on stage.

After all these years, McMurtry says he’s learned a lot about songwriting by simply giving in to the creative process.

“I think I’m a lot better than I was 25 years ago,” he says. “I’m not so concerned with the song making sense. I write songs to be sung now. I think I learned that listening to John Prine. You have to give a song its head. You have to go where the song wants to go.”

McMurtry cites decades of touring as another reason why he’s been able to develop his craft. “I see things through the windshield that wind up in my songs. ‘Choctaw Bingo’ [from 2002’s Saint Mary of the Woods] is nothing but driving up and down Highway 69 in Oklahoma. For a few years there, it seemed like every tour started or ended going down that road,” he says.