Andy Gill and the One-Man Legacy of Gang of Four 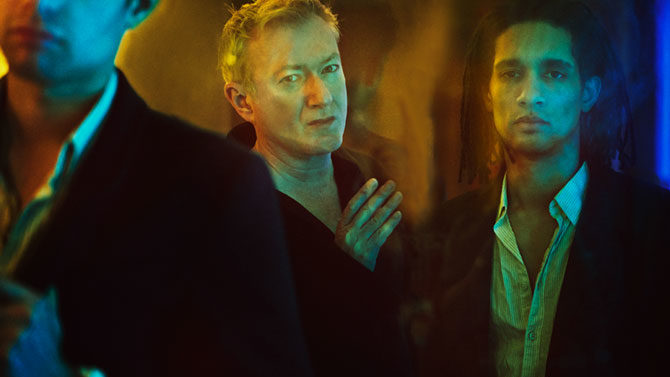 As the sole remaining founding member of Gang of Four, Andy Gill knows where he stands in the public eye. “Some people would probably say I like telling people what to do, but I don’t think it’s quite as simple as that,” says the Manchester-born guitarist and producer from his home studio in London.

Though Gill is 59, with nearly four decades as a working musician under his belt, he continues to find inspiration in working with others, collaborating either side-by-side or on opposite ends of the mixing board. What Happens Next, Gang of Four’s eighth studio album, features an entirely new crew of supporting musicians and numerous guest appearances. The record’s concept seems to fly in the face of Gill’s reputation as a cantankerous collaborator.

Founded in Leeds in 1977, Gang of Four saw Gill—along with Jon King on vocals, Dave Allen on bass and Hugo Burnham on drums—spearhead a now-timeless hybrid of post-punk, funk-rock and near-disco that would pave the way for decades of rhythmically minded punk, noise and rock bands: Mission of Burma, Rites of Spring, Nirvana, Red Hot Chili Peppers, Bloc Party and Sleater-Kinney all owe a debt to the group.

Perhaps to maintain a well-oiled machine, out of respect for his guests’ busy schedules or to manifest the album as quickly as possible, Gill doled out pre-written parts to each vocalist or musician, leaving pure collaboration by the wayside.

“I wanted to make sure I had as much prepared and ready and written, so it wasn’t, ‘Let’s sit and think about what the tune should be,’” says Gill.

Gill says his directorial instinct is about more than him simply wanting to get his way. “There are a few architects in my family—my grandfather, my uncle, my brother—and there’s a kind of a design gene going on there somewhere.

“I remember putting on plays as a kid and being the director, and telling the other kids, ‘You should do it like this or do it like that,’” he continues. “There’s a picture in my head where I see the way it should go, even with Gang of Four. So, when the band started, I was like, ‘No, the drums need to go like this. Change that beat—the hi-hat needs to be on the two, not the three.’”

Those instincts also led to a successful life behind the board. As a producer, Gill has manned the knobs for a variety of acts, including The Jesus Lizard, The Stranglers, The Mekons, Delta 5, Killing Joke and Michael Hutchence.

Yet his brand of leadership led to rocky relationships between the members of Gang of Four, and ultimately led to the group’s two breakups in 1983 and 1997. Gill says the arguments resulted from other members challenging his vision. “They’d say, ‘Well, why should I do it the way you tell me to do it?’” To which Gill would generally counter, “Because it’s a good idea, and I had the idea.”

Gill, King, Allen and Burnham would eventually reassemble as Gang of Four in 2004, conducting a full-scale tour that found the band playing the 40 Watt in October 2005. With a new supporting cast, Gill returns to the venue Monday in support of What Happens Next.

While Thomas McNeice has manned the bass since joining Gang of Four in 2008, drummer Jonny Finnegan and vocalist John “Gaoler” Sterry have been full-time members for only a few years. So far, everything appears to be running smoothly. Sterry, who joined the ranks in 2012, spent a number of months as Gill’s session singer, literally being paid by the hour to translate Gill’s so-called “character vocals” into something more conventional or musical. Eventually, the quartet played a series of secret shows at intimate London clubs before taking off the training wheels for a proper tour of China and Japan.

Even as Gang of Four’s legacy becomes more complicated with each iteration of its lineup, Gill’s status as one of post-punk’s elder statesmen endures. Still, that doesn’t mean he’s a household name. Of his 2005 trip to Athens, Gill remembers, “I popped into a nearby bar just before soundcheck to have a swift beer. There was nobody at all in the bar… [The bartender] said, ‘Can I see your ID?’ And I said, ‘I’m British, I don’t carry ID. Do you think I’m not old enough?’ And she said, ‘That’s not the point—you’ve got to show ID.’”