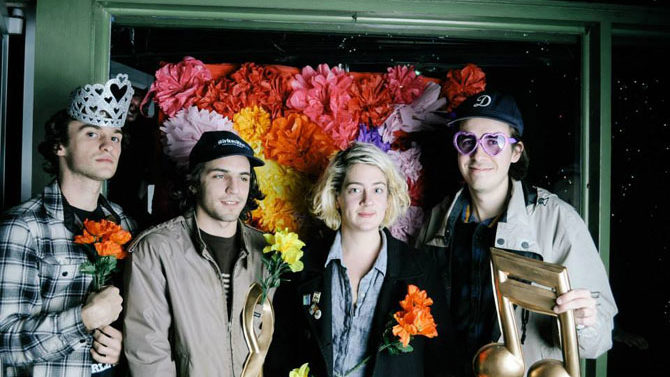 Every once in a while, the stars align for a hardworking Athens band, and a big-time record label makes them an offer they can’t refuse. But many artists choose to take matters into their own hands, spawning informal imprints to issue physical copies of their and friends’ music. Likewise, a handful of scene supporters are currently operating professional homespun labels whose reach continues to grow. While this list is certainly not comprehensive, we’ve rounded up a few of the Athens labels responsible for bringing our favorite music to your ears.

Helmed by Little Gold frontman and former Brooklynite Christian DeRoeck, Loud Baby Sounds was created as a means for DeRoeck to issue his own music. After issuing his band’s debut, Weird Freedom, and albums by fellow New York bands Ancient Sky and Radical Dads, DeRoeck packed it up and moved to Athens in 2012. Since then, the LBS roster has grown to include an assortment of like-minded groups, including local punks Deep State and, most recently, Jo RB Jones. The label released that band’s self-titled debut, a seven-song indie-pop affair, on cassette in August.

Releases from Saline, Blunt Bangs and Linda are in the works, and Deep State’s full-length debut, NICE, will soon make it onto cassette, with vinyl expected to arrive in 2016. NICE’s rapid rhythms and thematic grappling with mid-20s anxiety is bolstered by a strong melodic current, proving that one can still party in the face of anguish and absurdity. On Sunday, Oct. 25, DeRoeck will host this year’s installment of Loud Baby Fest, an all-day DIY showcase of his label’s talent.

To say Elephant 6 mainstay John Fernandes keeps busy would be an understatement. Aside from his contributions to Circulatory System, The Olivia Tremor Control and a slew of other projects—as well as his tenure behind the counter at Wuxtry Records—the longtime Athenian runs Cloud Recordings, a psych-oriented label responsible for releasing much of the E6 collective’s output. The latest addition to the Cloud roster—which also includes oddball Macon troupe Cult of Riggonia, ethereal space-folk outfit Dream Boat and scene vet Derek Almstead’s Faster Circuits project—is fellow E6er AJ Griffin’s French Exit. His band’s debut, Jerk Store, released digitally by Cloud last week, finds the songwriter whimsically twisting the stylings of Elliott Smith and exploring spacey territories with an assortment of pianos and keyboards.

Local recording engineer and producer Jesse Mangum recently wrapped up his Summer Singles series, a season-long project in which he recorded, mixed and mastered each artist’s contribution in just five hours. Made available through his MOEKE label, the compilation’s 22 songs exemplify a vibrant cross-section of local talent; this summer’s venture concluded with recordings from Tongues, Group Stretching and Jones College Radio, among others.

Aside from two years’ worth of singles, MOEKE has also released EPs from Cottonmouth, Brothers and, most recently, Dream Culture. Conceptualized and primarily recorded by songwriter Evan Leima, the band’s second outing, Post Habitual, is a progressive take on psych-rock, akin to the blissed-out sounds of Tame Impala and Unknown Mortal Orchestra.

Arrowhawk, founded by Athens-based music publicist Alyssa DeHayes, deals in an eclectic mix of music from locals and outsiders alike. The label’s first vinyl release, for noise-punks Bambara’s Dreamviolence, served as an operational test of sorts. After breaking even within five months of receiving the LPs—thanks in large part to DeHayes’ diligence, as well as the band’s European tour stint supporting A Place to Bury Strangers—running a small label began to seem sustainable. With releases from Dream Boat, Pinecones and Richmond, VA’s White Laces garnering critical acclaim, Arrowhawk is now poised to release another Bambara album in early 2016. “An Ill Son,” the first taste from the forthcoming Swarm, is a noir-like burner showcasing the band’s signature sonic squall and singer Reid Bateh’s Swans-esque snarl.

Fall Break Records, founded by law student Taylor Josey in early 2014, began unintentionally. After a friend approached Josey in need of a fake label name through which to release his music, Josey decided to take his fascination with tapes and turn the enterprise into a reality, obtaining a business license application the next day. Representing “the antithesis of spring break culture,” FBR specializes primarily in heady, lo-fi pop. In its short existence, the label has cast a wide net; aside from releasing tapes for Athens artists Shehehe and Richard Gumby, FBR has issued albums from artists as far and wide as Milwaukee and Northern England. One of its most recent releases, Dead Neighbors’ self-titled album, touches on all the pleasure points of late-’80s and early-’90s alternative music: post-punk, jangle-pop and shoegaze in equal measure. The fact that the band’s debut was recorded, mixed and mastered in “a few bedrooms… over a few months” means it’s right at home at Fall Break.