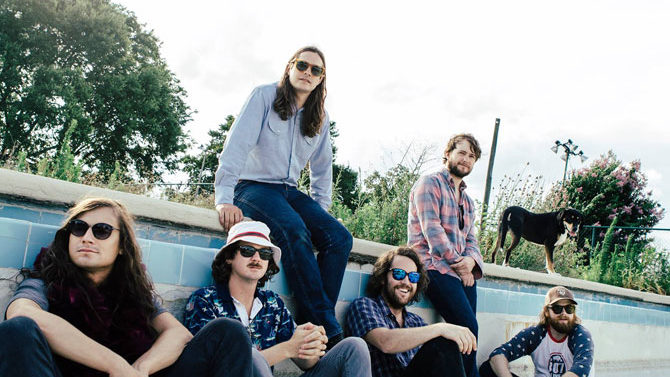 If you’ve been following the nominally Athens-based five-piece Futurebirds over the past few years, you won’t be surprised that the band is gearing up to release its third full-length LP, Hotel Parties (due Sept. 25 via Easy Sound Recording Co.). The group oscillates relentlessly between recording and touring, and a lull in live dates of late suggested studio activity was taking place.

The sessions that led to Hotel Parties were completed at a studio in Richmond, VA—a first for Futurebirds, who have typically recorded at Chase Park Transduction with local engineer Drew Vandenberg. Vocalist, banjo player and guitarist Thomas Johnson says that not knowing anyone in the Richmond area freed the band to immerse itself in the process.

“It was really important for us to get out of the area [to record]. I think we were tired of doing the same old thing,” Johnson says. “By the time we set out to record Hotel Parties, only one of us lived in Athens. We thought we might as well go somewhere that was all-inclusive. If we were going to do it in Athens, we would have had all sorts of distractions. In Richmond, we didn’t really know anyone there. For the most part, we didn’t really leave the complex.”

That “complex,” Johnson notes, was near a former plantation that included a Native American burial ground. It also wasn’t far from where the front line of the Confederate Army was stationed during the Civil War.

The band brought in Vandenberg to help out with the recording. Johnson says Vandenberg took on a producer role, rather than focusing on tracking. “Drew was able to take on a more big-picture role, because we had others helping us at every stage of it,” he says, also noting that additional overdubs and some vocal tracks were completed at home, far from the conveniences of the professional studio.

For post-production, the band brought in Brian Paulson, another heavy-hitter engineer—his impressive resume includes work with Slint, Uncle Tuplelo, Son Volt, Wilco, Superchunk and many others in the indie rock canon—to massage the songs after most of the recording had been completed.

Regardless of how the recording shook out, the results are stunning: Hotel Parties includes some of the band’s best work to date. Johnson says Futurebirds are excited to finally reveal the album to the public (especially since some of the songs were demoed as early as fall 2013), adding that the band will continue its relentless touring schedule in order to promote it.

“For most bands that aren’t on major labels, you really aren’t selling a lot of records. So, in a way, you have to tour to be a band,” says Johnson. “From a [financial] standpoint, it’s the only way we’ve made money.”

Although Johnson, an audio engineer himself, relishes the opportunity to record, he admits that there’s no substitute for performing in front of an audience. “Playing live is also the one thing that you can’t really reproduce. You can’t ever really replace that person-to-person experience,” he says. “It’s been paying off, and I think people are paying attention. Or at least, I hope they are.”

WHO: Futurebirds, T. Hardy Morris and the Hardknocks, Susto
WHERE: Georgia Theatre
WHEN: Friday, Sept. 25, 8 p.m.
HOW MUCH: $15