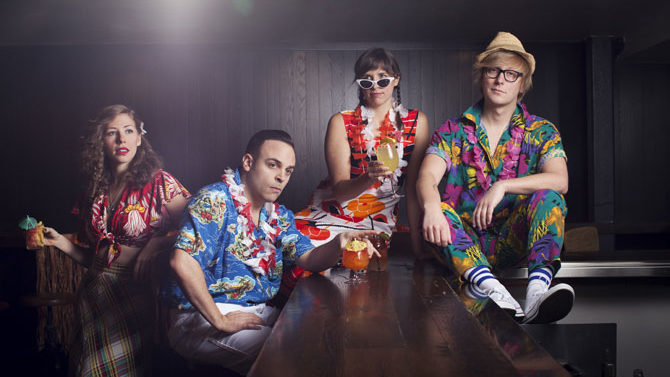 School is back in session (gulp!), and the Athens concert calendar is responding by filling up with must-see shows over the next few months. As has become Flagpole tradition, we’ve selected the best of the already-announced bunch and formed it into a handy preview guide for y’all music-lovin’ party monsters. Bookmark the Calendar for updated calendar listings, and stay tuned for extended previews of many of the shows listed below.

Wildwood Revival
Saturday, Aug. 29 & Sunday, Aug. 30 @ Cloverleaf Farm
The eco- and artisan-focused Wildwood Revival returns for a second summer installment at Cloverleaf Farm in Arnoldsville, just outside of Athens. In many ways, Wildwood is the music festival for folks who don’t generally go for music festivals. This year, you can expect to hear music from indie and Americana mainstays American Aquarium, Tall Tall Trees, Blackfoot Gypsies, Water Liars, Cicada Rhythm and more to be announced. Plus, food trucks, an artists market, free water, affordable local brews and plenty of camping. [Gabe Vodicka]

Best Coast
Saturday, Sept. 12 @ 40 Watt Club
This West Coast duo just released its third album, California Nights, and it’s the group’s slickest release to date. Though the songs remain similar (to each other, to past songs, to a fault), the lush romance and straightforward nature of both the lyrics and music make for supremely accessible pop tunes that are both intimate and universal. [Chris Hassiotis]

Swervedriver
Wednesday, Sept. 16 @ 40 Watt Club
One of several legendary acts to grace an Athens stage this fall, UK outfit Swervedriver was responsible for introducing a heavy rock edge to the region’s shoegaze craze in the early ‘90s. Back with a remarkably solid new album, I Wasn’t Born to Lose You, the group plays the 40 Watt as part of an anticipated U.S. comeback tour. [GV]

Diarrhea Planet
Wednesday, Sept. 16 @ Georgia Theatre
Once you’re in the thick of a Diarrhea Planet show, it doesn’t really matter how terrible the band’s name is. The Nashville band deploys an arsenal of guitars to create the kind of shredding intensity that’d be downright irritating, corny and dated if it weren’t so goddamn joyous. Generally better consumed live, the band’s music is infectious, loud, raucous and a whole lot of fun. [CH]

Karl Denson’s Tiny Universe
Friday, Sept. 18 @ Georgia Theatre
Funk troubadour Karl Denson has belted out infectious saxophone soul for over a quarter-century. He first earned his stripes backing up Lenny Kravitz in the early ‘90s and touring with acid jazz group The Greyboy Allstars. His jazz/funk/dance hybrid band Tiny Universe recently finished a stint on the road with the Rolling Stones, and Denson’s ability to re-contextualize jazz has earned him a permanent niche in the jam band circuit. Though Denson is nearly 60, the hard-working virtuoso still averages 150 shows a year. [Paul DeMerritt]

Helmet
Thursday, Sept. 24 @ 40 Watt Club
The ‘90s revival is in full effect (or has it jumped the shark?) as alt-metal act Helmet swings through town to play its 1994 classic Betty in its entirety, plus more. Dubbed as nu-metal forebears for their chug-a-lug rhythms and early adoption of drop-D tuning, the group’s music nonetheless remains both smarter and classier than the butt-rock onslaught it inspired. [GV]

Father John Misty
Wednesday, Sept. 30 @ Georgia Theatre
After a lengthy solo career performing under his real name and five years spent drumming for Fleet Foxes, Josh Tillman has reached new heights as Father John Misty. With I Love You, Honeybear, his sophomore album under the moniker, Tillman has largely freed himself from any preconceived notions of being a “folk act.” His onstage presence is that of a freewheeling rock star with a penchant for extreme narcissism and fancy lounge suits. Misty’s live show is bombastic and hilarious, if you’re willing to accept the big ego that comes along with it. [Nathan Kerce]

The Mountain Goats
Monday, Oct. 5 @ 40 Watt Club
Huzzah! Trailblazing lit-folkie John Darnielle will stop off in Athens for his first time in nearly four years; this time, he’ll bring the full band with him. The 40 Watt show is part of the last leg of the Goats’ North American tour in support of Beat the Champ, this year’s excellent pro-wrestling concept record. [GV]

Athens Intensified
Wednesday, Oct. 7–Saturday, Oct. 10
Start with New Orleans bounce powerhouse Vockah Redu, pausing if you can to dig the Nas sample on “Fantahsea.” Move from there to cool bluesman Willis Earl Beal, and drop out further with the jagged disquiet of Brooklyn’s Guts Club. You’ve still only dipped a toe into Athens Intensified, now in its fourth year and boasting four days of music across six venues. There’s also Brooklyn-by-way-of-Athens noise droners Bambara and Nickelodeon-by-way-of-New Haven veterans Polaris (of “Pete & Pete” theme song fame). $45 gets you into everything; drop that to $25 if you don’t mind bypassing Wavves and Toro y Moi. [Marshall Yarbrough]

Cory Branan
Thursday, Oct. 15 @ Lumpkin Street Station
Singer-songwriter Cory Branan has become a favorite in certain Americana circles over the past decade; his concise, road-worn songwriting defies genre while nodding to outlaw country and punk rock greats with equal passion. Make a point to catch his gig at the relatively new Lumpkin Street Station, which is becoming the Athens spot to see roots music on the edge. [GV]

The Polyphonic Spree
Friday, Oct. 23 @ Georgia Theatre
In 2005, Tim DeLaughter’s sprawling rainbow coalition of a choral ensemble stepped in to score the film Thumbsucker after the death of Elliott Smith, who’d originally signed on. Despite a well-cast Keanu Reaves, Thumbsucker was a mostly forgettable piece of mid-’00s indie-by-numbers blandness, too vanilla for the ELO-sized ambitions of the Polyphonic Spree. Ten years later, the Dallas, TX group endures, eager as ever to show that its maximalist concept is more than quirk for quirk’s sake. [Marshall Yarbrough]

Gang of Four
Monday, Oct. 26 @ 40 Watt Club
Though the original bandmates reunited for a memorable run of shows in the mid-aughts, the current Gang of Four lineup features only one founding member, guitarist Andy Gill. Still, though the 2015 version of the Gang may only amount to a glorified tribute act, it’s worth it to remind yourself where all that dance-punk you were grooving to in college was born. [GV]

Loudon Wainwright III
Thursday, Nov. 5 @ The Foundry
Wainwright is a legendary folk singer whose distinctly humorous and often self-deprecating style has kept him a relevant figure in the genre for almost 50 years. In addition to his music, Wainwright is a character actor who appeared in and composed music for several Judd Apatow projects throughout the 2000s, bringing his music to a new generation of audiences. Expect his live show to be a stripped down affair covering a wide range of songs from his extremely prolific career. [NK]

Southern Culture on the Skids
Thursday, Dec. 3 @ Caledonia Lounge
This North Carolina-based rock trio sends up Southern stereotypes, and has been doing so for three decades. The schtick can get old—SCOTS have mined topics like fried chicken and questionable lovin’ for about all they’re worth—but there’s something charming in the band’s unwaveringly kitschy mix of rockabilly, surf and country. The kind of band that once packed the 40 Watt, they’ll play the Caledonia this time, making this up-close-and-personal show worth catching. [CH]