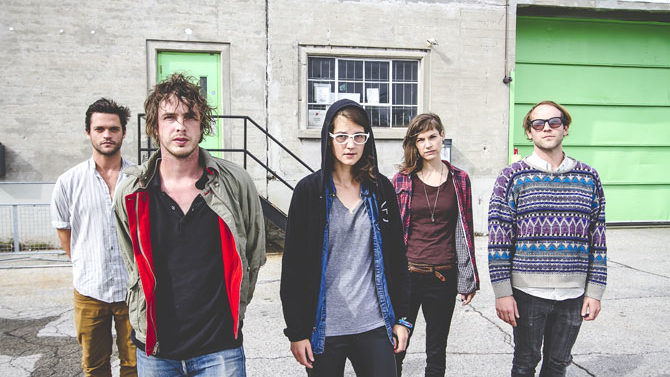 When a band reaches a certain level of exposure, there inevitably come crucial career decisions; for instance, whether or not to license music for movies or TV, sign to a major label or tour with a larger group that might not share the same ethos or audience. While fans of groups who make the leap may jump ship or cry “sellout,” there is a certain grace involved in crossing over without losing one’s creative self in the process.

Take garage-punk trio Broncho, which formed as a four-piece in Norman, OK, in 2010. Guitarist and vocalist Ryan Lindsey recorded a few preliminary demos before sending them to friends for feedback; soon after, the band’s lineup and first show were confirmed.

Broncho’s debut album, 2011’s Can’t Get Past the Lips, had all the touchstones of a DIY band with lofty aspirations. The album’s fuzzy, guitar-driven sound was lo-fi and scrappy, but Lindsey’s incredibly catchy songwriting hinted at the promise of a not-so-ramshackle future. Can’t Get Past the Lips garnered press for the band, prompted national touring and eventually saw a re-release on producer Kevin Augunas’ Fairfax Recordings label.

Just Enough Hip to Be Woman seamlessly straddles the line between Stooges scuzz and Cars gloss, with each song hovering around the three-minute mark. The album features quite a few standouts, including “Class Historian,” with its wordless “doot-doot-doot” refrain.

Following the record’s positive reception from critics and listeners, Lindsey says the band has reached the point where writing and touring is a full-time commitment. “We’ve been touring since January,” he says. “Staying on the road is cheaper, but it has helped that we’ve had some TV and film placements.”

Indeed, at least three of the band’s songs from its second release have been sync-licensed—most notably with HBO, for placement in the closing credits of an episode of “Girls” and an advertisement for their video-on-demand service, HBO Now.

“All that being said,” says Lindsey, “I’m going to mow my friend’s lawn today.”

Does Broncho’s frontman need to make a little extra spending money before hopping back on the road, or is he simply helping out a friend in need? The band’s current tour includes a variety of gigs that could seem to support either answer. The group’s Georgia Theatre rooftop show comes amidst a string of small-club shows, large festival appearances—including Bonnaroo, Firefly and Forecastle—and international appearances.

“We’ve gotten a lot more comfortable on bigger stages, through opening up for bigger acts over the last year,” says Lindsey. “It’s nice to reach that place, because it gives us more options [and] lets us do more. But I still love playing a tight, claustrophobic club.”

Regardless of whether Broncho has yet made the jump to the big-time, the group’s Athens show should at least offer them an opportunity to revel in their grimy roots.

“We’ve had some fun nights in Athens, both involving the Georgia Theatre and the backstage bathroom. It’s a great hang in that bathroom,” says Lindsey. “I’m looking forward to further exploration on this next visit. But I could just end up in that bathroom all night.”

WHO: Broncho, Concord America
WHERE: Georgia Theatre Rooftop
WHEN: Tuesday, June 16, 9 p.m.
HOW MUCH: $5