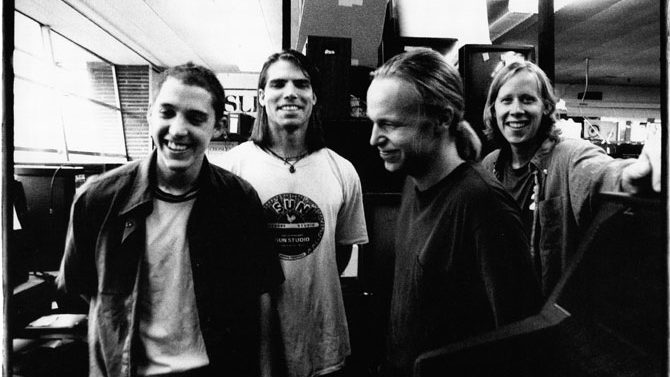 It has been nearly 13 years since Winger, Zimmerman, Riddle and Kelly have played together as Dayroom, but the group will reunite for two shows this week—on Friday, Sept. 5 at Smith’s Olde Bar in Atlanta and on Saturday, Sept. 6 at the Melting Point in Athens.

Dayroom took shape in the early ’90s, when all the band’s members were attending UGA. During their early years, they rehearsed in the sweaty and cramped Joe Campbell storage units (stacked behind the intersection of Pulaski and Broad streets) and gigged around town at old haunts like Club Fred, the High Hat, Tasty World, the Atomic Music Hall and the One Love Club. By the time the group released its debut album, 1995’s Perpetual Smiles, it was headlining shows at the 40 Watt and the Georgia Theatre.

“We weren’t trying to be rock stars or anything,” Zimmerman says. “We just wanted to write songs, play out and try to sustain it for as long as we could. For a while, that’s all we knew how to do. We committed ourselves to it for years.”

Equally influenced by the New Wave weirdness of the Talking Heads, the nerdy prog-rock of Rush and King Crimson and the funkier side of the alternative rock movement, Dayroom delivered a quirky musical mix. Sometimes, they drew from the anthemic styles of Pearl Jam and Smashing Pumpkins. A fan reportedly once called them “Primus with Bruce Hornsby on the piano.” Barenaked Ladies was a common comparison. The group’s more sensitive, romantic material paired well with the cheerful fare of staples like Hootie and the Blowfish, Dave Matthews Band and Widespread Panic.

“Listening back, you can hear the influences of what was going on at the time in alternative rock,” Winger says. “We all had some level of musical training and education when we started. We [were] music nerds, you know? We’d put diminished chords into pop songs. There was a lot of music theory in there. It’s funny, getting back into these old songs and rediscovering that.”

On a roll in the late ’90s, the band documented its strongest compositions, independently recording and releasing two more full-length albums (1996’s Contagious and 1999’s Better Days), headlining shows at major venues and festivals, touring across Europe and earning a loyal following around the Southeast.

“We were sort of DIY before DIY was a thing,” laughs Winger. “We had Kickstarter situations going on before the Internet, with friends and family investing in us and donating money. They helped us make high-budget records without the help of a label. It was all a tight, family kind of feeling, all around.”

The foursome ended things in 2000 on an amicable, positive note, performing a farewell set as part of Athens’ 10th annual Mental Health Benefit. The band did a few quick shows in fall 2001 but hasn’t played since.

“We had busted our asses doing more than 200 shows a year for a few years, and we had some good success,” says Winger, who has worked for years as a studio producer and engineer. “We’d traveled around the U.S. and Europe and enjoyed it all. It’s fun to do that when you’re in your 20s. But we reached a point where it would be tricky to move ahead, and we all started thinking we might be happier if we each tried something different.

“None of us have stopped playing music since then, at least semi-professionally,” Winger adds. “Sometimes, [we’ve gotten] into stuff that was wildly different from Dayroom, but I think that’s cool. I think it will enhance what happens with these reunion shows. It’ll be really cool to see and hear how everyone has grown as we try to remember the songs and come up with new takes on the old stuff.”

Winger and Riddle currently live and work in the San Francisco area. The band’s rhythm section is still based in Georgia, though—Zimmerman in Atlanta and Kelly down in Statesboro.

Zimmerman also says he is excited to reconvene with his bandmates. Back in the day, he battled fits of self-doubt as a musician, second-guessing his drum parts and the band’s performances. He admits he had trouble simply enjoying the adventure while it happened. But he’s less worried about the details this time around.

“I’ve had chills this week, getting prepared,” Zimmerman says. “Back in the day, I used to listen to these songs obsessively and practice them. I’d be pretty hard on myself and the band at times, sometimes to a fault. Listening back to these songs again is taking me back to places I haven’t been in a long time, and I can feel the nervousness coming back. But I’ve seen and felt the enthusiasm about these reunion shows from friends and fans this summer, and it’s going be a great experience.”