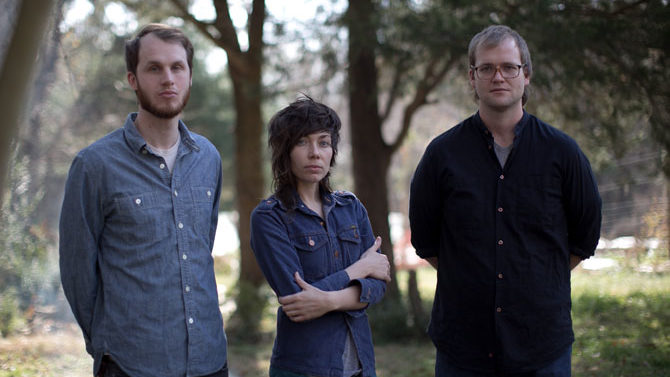 The cover of Mount Moriah’s sophomore album, Miracle Temple, shows a barn on fire. Despite the implied chaos, there’s a sense of calmness to the rest of the image; the artwork underscores that even in the midst of radical change, there is beauty to be found.

When one compares the Chapel Hill, NC-based three-piece to its members’ earlier projects, it seems it has set out to extinguish fires, moving from cacophonous metal and post-punk into more traditional, calmer, country-inspired sounds. The band’s lead singer, Heather McEntire, was formerly a member of the punchy Bellafea but made a conscious effort to step into a more vocally lush project this go-around.

“To my ears, Miracle Temple has a harder edge to it, and thematically there’s a more foreboding sense of darkness,” he says. “It’s also a more confident and forceful record than the debut.”

Although Miller admits Mount Moriah is “at heart a country-slash-folk-rock band,” he is quick to emphasize the links between his bandmates’ various musical endeavors. “The fact that we come from diverse musical backgrounds pushes the music in interesting places, as musicians navigating this shared creative space,” he says.

“[We] bring elements of our other projects into Mount Moriah in very subtle ways. There are certain touches—rough edges here and there, a certain sense of confrontation, maybe—that we bring in from the heavier bands,” adds Miller.

Mount Moriah’s label, Merge Records, has a reputation for being an indie rock powerhouse, launching the careers of artists like The Mountain Goats, Bob Mould, Spoon and Superchunk (the label was founded and is still run by Superchunk guitarist and singer Mac McCaughan). Although Mount Moriah’s sound delves into more country-influenced territory than those bands, Miller isn’t surprised the label has been so supportive.

“The Merge brand… is more synonymous with indie rock and pop,” he says, “but there’s a lot on the label that’s not necessarily of that mold.”

The relationship started when the band’s debut DIY album caught Merge’s attention. Shortly after, the label agreed to reissue the self-titled, self-released record. “Heather and I didn’t press vinyl copies when we originally put it out,” says Miller, “so it made a lot of sense to have a bigger label with greater resources do that.”

The partnership has allowed the band to write and record more frequently, practices Miller sees as imperative to staying on the cultural radar.

“Writing and recording at a faster pace plays to a band’s advantage,” he says. “A record means a lot less these days than it maybe used to. It’s a drop in the bucket… I guess the best strategy for a band is to create and sustain a body of work long enough that people take notice of what you’re doing.”

In addition to their two strong, genre-bending albums, Miller and company have garnered a fair share of attention for their live performances. Mount Moriah’s praises have been sung loudly by The Mountain Goats’ John Darnielle, and the group was featured on Bon Iver’s celebrity iTunes playlist in 2011. The band has also enjoyed raving reviews from Paste, Stereogum and other buzz-generating blogs.

Still, flattering as the praise may be, Miller doesn’t want to put too much stock in such endorsements. “Every aspect of the music business seems very fickle these days,” says Miller. “I try not to think about it. It’s probably better to just keep working.”