The Woggles’ Rock and Roll is Everlasting 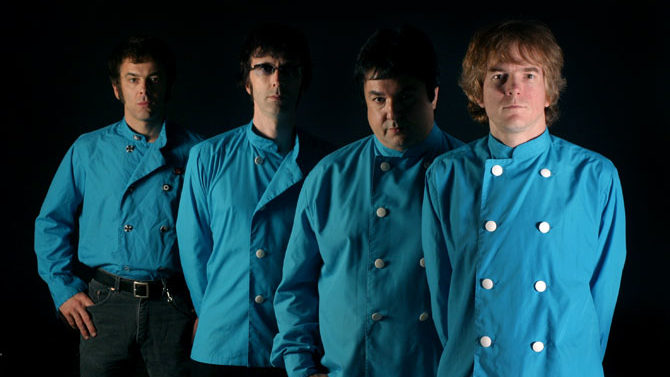 Powered by the soulful wail of singer Manfred Jones, the clever riffs and power chords of guitarist Jeff Walls and the energetic, big-beat bomp of Dan “Electro” Hall (drums) and Patrick “Buzz Hagstrom” O’Connor (bass), The Woggles explore the explosive side of rock and roll. The band started out as an Athens-based act nearly 27 years ago, but these days, its members are scattered all over the country.

“The Woggles really belong to the world,” says Jones, a.k.a. “The Professor.” “There are barflies all over that need to be entertained.”

After releasing several EPs, singles and mini-albums, The Woggles issued their first bonafide full-length, Teen Dance Party, on the Estrus label in 1993. It was a garage-forward album, but there was a consistent Southern vibration throughout.

“We realized that our Southern perspective and roots [were] things to carry forward,” Jones says. “They helped keep us unique. Now, we’re lumped in with other contemporary garage-rock bands, [but] I think we certainly have a heavier R&B and Southern influence than some of them.”

“When I first started producing records for The Woggles, it was like the Holy Grail to achieve that studio sound that The Sonics got, or whatever,” Walls says. “For a long time, you were kind of chasing technology and using million-dollar boards to try to make something that sounded like it was blasting through a transistor radio.”

The Woggles signed with guitarist/actor/radio host Steven Van Zandt’s Wicked Cool Records in 2006. Their latest album, a rowdy 12-song collection titled The Big Beat, is their third for the label and fits nicely alongside the music Van Zandt champions on his weekly radio show, “Little Steven’s Underground Garage.” The Big Beat lives up to its title, with meaty hooks, clangy drums and Jones’ shouty delivery. But the band says its 12 tracks came together in an unusually start-and-stop way.

“There was an interesting process that went into the making of this record, one that I’d never tried before,” Walls says. “We didn’t think it was such a hot idea doing it, but in hindsight, I feel like it was actually a pretty good idea. Little Steven wanted us to cut four songs in three little batches, three times in a row. It’s kind of like how they did it back in the old days.”

Some typical Woggles antics pop up on The Big Beat, like Jones’ maniacal harmonica and maraca work and Hall’s Keith Moon-esque tom fills. Some old-school fans might be surprised by the dense production style; the record features additional horns and organ (“Take it to the People,” “Do the Git Down”) and walls of vocal harmonies (“What Kind of Girl”).

“It’s about being song-driven and inspired,” Jones says. “It’s rock and roll for the ages. I never put on a Chuck Berry song and go, ‘Oh, that sounds like ’50s rock and roll.’ I think, ‘What great songwriting, what clever lyrics, what a great groove.’ I don’t think of it existing within that time period.”

While The Woggles still claim Athens as home at heart, they rarely perform in town.  Only Walls is stationed in Athens. (Jones resides in Los Angeles, while Hall lives in Tuscaloosa, AL and Hagstrom is in Atlanta.) In fact, the band has only played in town twice in the last 11 years, so this week’s show at Green Room will be a genuine treat for old friends and new fans alike.

“Kurt [Wood, of opening band The VG Minus], is an original Woggle, so that makes it a fun family affair,” says Walls. “And I’ve been playing keys and guitar with Nate [Mitchell] from Nate and the Nightmares in a band called Free Associates.”

Though their new album is a studio gem, Jones and Walls agree that, for The Woggles, the live show is still the main focus. “For us, onstage, it’s often about how close you get to meeting that inspiration within the songs that you’re crafting,” says Jones. “Sometimes, it’s necessary to be simple, and other times you ask for something to evolve a bit more.”