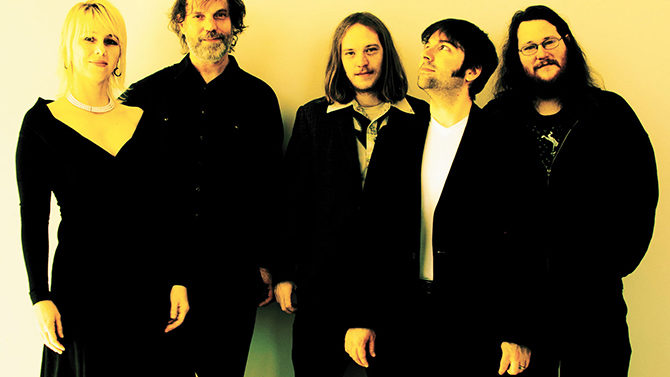 Jason NeSmith is thinking of writing a novel.

“It was gonna be about touring,” says the Casper & the Cookies frontman between bites of chicken bahn mi at Yummy Pho, where he’s walked for lunch from his day job at Bel-Jean. “Every chapter was going to deal with a different issue bands have when they’re touring.”

When it comes to those issues, NeSmith is an old pro. He started his first live band in 1998 and has barely left the stage since. After founding Casper & the Cookies in 2004 with his wife and fellow songwriter Kay Stanton—whom he met while they were both on tour in “someone else’s band”—he hit the road with of Montreal just as that group’s wave of loopy psych-pop was cresting.

“I realized I could do that, or I could do my thing, take what I’d learned and apply it to my band,” NeSmith says. Ten years later, Casper & the Cookies is preparing for the release of its fourth full-length, Dingbats, set for release this spring. (In addition to NeSmith and Stanton, the album features locals A.J. Griffin, Gregory Sanders and Jim Hix.)

“I don’t think it’s a concept album, but I like to take the concepts that are there and see if they can make a shape,” NeSmith says of Dingbats. “There’s a lot about time. I used this recording of myself fast-forwarding and rewinding a cassette tape, because it fit the theme so well.”

NeSmith is quick to mention that he’s not the only songwriter on the record, noting that Stanton’s songs—like the delightfully punky “Drug Facts,” and “Amphetamines,” which somehow makes a chorus of repeated intonations of “You will dance” sound ominous—are largely about drugs.

“We don’t do a lot of drugs. You know, [Wayne Coyne] from the Flaming Lips did acid, like, twice and has been writing about it ever since,” he says with a laugh.

Listening to a song like “Lemon Horses,” a mildly psychedelic track on which NeSmith’s reverb-washed voice sings, “The man tried to bust us/ Down El Paso way/ I said, ‘Look here, you fuckin’ redneck/ I’m from Athens, G-A’,” you could be forgiven for wondering how many illicit substances were ingested in the studio.

But NeSmith and Stanton both have long displayed a penchant for dosing their songs with a silly braggadocio. It infuses Dingbats with a note of irreverent fun: (“I got a bottle of whiskey/ I got a joint in my left hand/ And you can’t do nothing to me/ I’m in a rock and roll band”). And as for the streak of off-the-wall lyrical turns, credit goes not to “headies,” but to NeSmith’s recent interest in subjects like quantum mechanics.

One of the strangest songs on the album is titled “Spin ½.” Musically, it’s straightforward—guitar awash in feedback, a briskly clipping high hat—but what on Earth is it about? “I’ll take you down/ Down to my chamber/ Don’t got a place/ But it do got a name/ Follow my voice/ It’s inside your body/ Been waitin’ for ya/ On the other side,” NeSmith sing-speaks with the quavering vibrato of a revivalist preacher.

“[“Spin ½”] uses string theory—a ‘spin ½ particle’,” says NeSmith. “You know how most things have a 360-degree surface area? Well, this particle has 720 degrees of surface area. So I was thinking, you could abduct someone and hide them there, on the other side of the particle. And no one could ever find them.” He pauses for a moment. “Which is funny and kind of dark.”

“Funny and kind of dark” is a fair assessment of the Cookies’ music overall, which is not to say that’s it’s not also thoughtful and well-crafted. By playing with taboo, bizarre and even mind-bending concepts within the confines of accessibly poppy tunes, a la The dB’s, the group creates music that balances familiarity and novelty.

In person, NeSmith, with his shaggy bowl cut and Jason Schwartzman-like scruffy beard, is funny, earnest, affable and meticulously polite. Maybe he channels the “kind of dark” part of himself into his songs so he can exist as a nice guy day-to-day. In any case, both he and the rest of his band seem to have deep wells of energy and patience. They spent three years on this record, much of it figuring out how it was going to be released. They wanted to find just the right home—“someone who is in it for the love of music but isn’t financially naïve,” as NeSmith describes the Cookies’ current label, Wild Kindness.

And now that the record is complete, the Cookies are occupied with preparations for their upcoming tour. A recent Indiegogo campaign landed them $3,380 to film a video for “Lemon Horses” and kickstart their stint on the road. Their list of prizes—“Pen Pals for a Year,” “Pet Portrait by Kay,” “Tambourine Player for a Night,” “Cookies by Cookies!”—is an object lesson in how to kick ass at online fundraising. (When first reached to set up an interview, NeSmith answers his phone from the aisles of Michael’s. “We’re buying supplies to make handmade box sets,” he explains.)

After a decade of making music together, Casper & the Cookies have solidified their status as one of the most interesting bands in town. And if Dingbats turns out to be their last record, NeSmith can live with that. “Everybody always thinks it might be the last one,” he says of the musician’s state of mind. The day after sending off the completed record to the label, he says he boarded a plane thinking, “Well, if it crashes, at least we finished the album.” But of course, it didn’t.