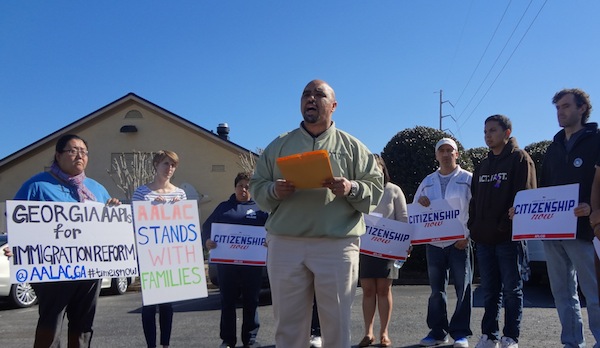 Participants said that current immigration policy is tearing apart families when undocumented parents are deported, and it punishes children who were brought to the U.S. as babies but now can’t complete their education because of Georgia’s ban on undocumented immigrants at competitive public colleges like the University of Georgia.

They called on Broun to support a path to citizenship for law-abiding, taxpaying undocumented immigrants—something House Speaker John Boehner declared dead earlier this week due to blowback from conservatives.

“Every day that passes by is another day our families are broken,” said Cristian Avila of Fast 4 Families. “It’s another day that children are left without a parent. It’s another day people die in the desert” trying to sneak in or out of the U.S. because they have no legal way to enter.

UGA and Freedom University professor Pamela Voekel said that Broun has “demonized” undocumented immigrants by referring to them as “criminals.” (Being in the U.S. without proper authorization is a civil offense, not a criminal one.) Broun has proposed stricter border enforcement, including fences on both the Mexican and Canadian borders.

Chris Dowd, a volunteer on Tim Denson’s campaign, attended the protest in Denson’s place. Denson has proposed a “welcoming city ordinance” that would bar local police from enforcing federal immigration laws in Athens.

DeLane Adams, communications director for the Georgia AFL-CIO, delivered a letter to a Broun aide which was accepted. The aide also told a WUGA-TV crew they could not film inside his Atlanta Highway district office.